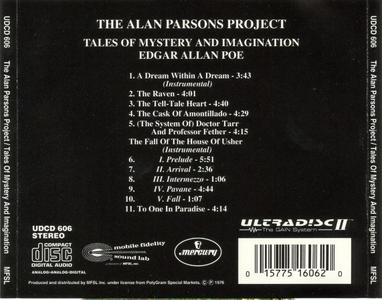 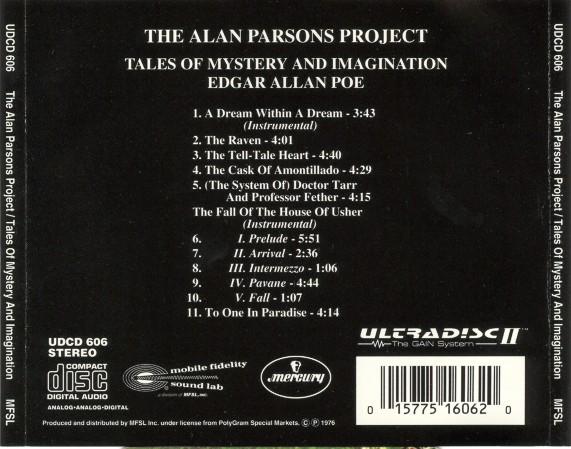 
TALES OF MYSTERY AND IMAGINATION

01. A Dream Within A Dream (Instrumental)
02. The Raven (Leonard Whiting)
03. The Tell-Tale Heart (Arthur Brown)
04. The Cast Of Amontillado (John Miles)
05. (The System of) Doctor Tarr And Professor Fether (John Miles)

"Forget about the pop songs that Alan Parsons made later in the 80's, this is a completely different approach to music. I'm not even a diehard Alan Parsons fan but this is truly a masterpiece of effort and inventiveness.
Parsons decided to take the works of Edgar Allen Poe and put them to music, and I don't think it could have been done better. Poe has always been one of my favorite writers, allowing me to sift through a human mind on its decline through the many layers of madness. Heavy use of synthesizers creates a fantasy world full of the moods and emotions Poe used in his writing.

Dream Within A Dream is an instrumental, nearly classical piece, with an introductory reading by Orson Wells, a slow heavy beat of drums and bass joined by keyboards reminiscent of a harpsichord and choir type vocal accompaniment. The synthesized riffs are vaguely similar to the Priest's theme from The Exorcist, an apt association of dread for this moody piece.

Dream Within A Dream blends smoothly into The Raven, probably the most popular piece on this album. It is masterpiece of Poe's famous poem set to music, with the vocals eerily sang using a vocoder, and the choir accompaniment in the background. The synthesizer brings out more horn sounds, and the music, while still eerie, has a more triumphant and powerful sound to it than Dream.

The Tell Tale Heart starts out with a scream of derangement, and brings the album into its rock genre with a faster, pounding beat and more guitar than keyboard. The vocals are purposefully stressed into a pitch that expertly portrays the lunacy of the murderer's descent into madness as the old man's beating heart refuses to stop its tormenting clamor, and incorporates some of the actual lines from Poe's unforgettable tale of unleashed insanity. The bass line in this song does indeed sound like a rapidly pulsing heart, louder and louder as sanity is cast aside.

The Cask of Amontillado slows the pace back down, in a gentle melody reminiscent of The Beatles "She's Leaving Home", with similar tune and pitch, but more powerful in its chorale moments. I really felt that Parsons did a tremendous job on this tune not only with the music but with the lyrics, telling (as close as three verses possibly can) the summation of this tale of murder. Of particular note are the echoes of the voice of Fortunato behind Montresor's in the chorus, overlapping each other as the exchange of words between the two within that dank cellar would have, yet eerily gentle rather than desperately pleading.

With classical strings sawing off notes as a ticking clock would pass the seconds of agonizing time, powerful horn sounds, and the gentle, deadly lyrics, I think this song is really one of the masterpieces of the album though it never got the recognition some of the other songs did.

The System of Doctor Tarr and Professor Fether is the obvious choice on the album for radio play, a tiny bit obvious that it was intended to be the breakout song for the album, though I believe The Raven actually became more popular. An excellent choice for the theme, the very nature of the story itself brings the beat of the music back up into the more rock orientated aspects of rhythmic drums and lots of guitar riffs, and deep voices chanting "Just what you need to make you feel better" in the background. While it doesn't delve into the actual story behind the music as much as some of the other pieces, the music does portray a certain maniacal glee within it, and manages to fit in quite nicely with the eerier and more lyrically elaborate compositions; and adds some fun by bringing in the sounds of applause and overlaying riffs from both The Raven and Dream Within A Dream at the end of the song.

The Fall of the House of Usher is the major masterpiece of this musical representation of Poe, just as the book is one of the more famous examples of his literary genius. Usher is comprised of five separate movements; and is a beautiful, classical composition of mood and mystery, death and decay, body and spirit, insufferable gloom, and the storms that raze the walls of body and mansion.
The first movement, a seven minute piece called Prelude starts with another oration by Orson Wells, and is soft and almost flirtatious in places, forceful and climaxing in others, incorporating a feeling of anticipation or longing within the notes; and ending aptly with the sounds of a powerful thunderstorm and driving rain.

The second movement is a two and a half minute piece called Arrival, and picks up with the sounds of the storm, and speeds into a climax of synthesizer and drums, falling softly off into a languid beat and morose guitars before the synthesizer builds back up to its peak once again.

The third movement is called Intermezzo, and is only one minute in length, not much more than eerie sounds of a cathedral type organ, that plays its self out into the fourth movement called Pavane.

In Pavane we hear more bell-like synthesizer and guitar, again reminiscent of the Priest's song in Exorcist, but underlain with a throatier, progressive foundation from synthesizer and bass, until about three minutes into the melody it picks up with the addition of drums and a building crescendo of escalating volume and tension. I believe this is the movement that Parson's actually used a glockenspiel in, though with his ability to make synthesizers sound like whatever he wanted them to, its hard for me to tell if it's the real thing or not.

The last movement of The Fall of the House of Usher is a mercifully short (51 second) instrumental scream of anguish, building kettle drums and an escalating noise from the synthesizer along with what sounds like feedback shrieks. The does, however, symbolize the ending of Poe's work; where, "There was a long tumultuous shouting sound like the voice of a thousand waters - and the deep and dank tarn at my feet closed sullenly and silently over the fragments of the House of Usher."

The last song on the album is a great disappointment to me. To One In Paradise is a real poem by Edgar Allen Poe, a stunningly beautiful poem of anguish and lost love. Instead of incorporating Poe's work into the actual structure of this melody as he did with The Raven and The Tell Tale Heart, he used sappy and uninspiring lyrics about "believing in your dreams". Pah! The music is very "Pop" orientated and softly saccharin, and only at the very end of the tune did Parsons add an oration from the real poem; "And all my days are trances, and all my nightly dreams, are where thy gray eye glances, and where thy footstep gleams, in what ethereal dances, by what eternal streams.", but the narrator can barely be heard above the syrupy sighs of the chorus and the gentle riffs of the music. I just don't believe that a touchy-feelie, good-mood, gentle and happy song like this belongs to any of Poe's work whatsoever. The mood should have been as dark and anguished as the poem itself.

There you have it. Altogether one of the most original musical works of art to this day, it manages to cross the time barrier of evolving rock and electronica, and still hold its own in the top ranks with its eclectic creativity. Pick up a copy, get some headphones, and enjoy yourself." – Schtinky "Schtinky"