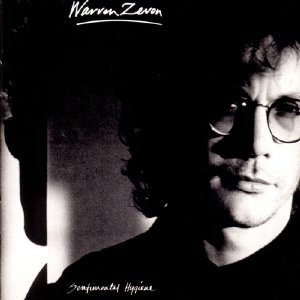 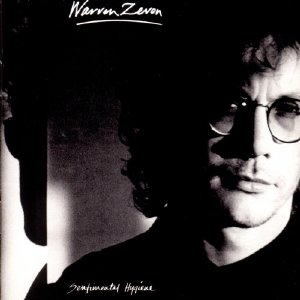 After a rather well-publicized fall off the wagon following the release of The Envoy, Warren Zevon went five years without releasing an album, but his time in the woodshed seemed to have done him good, as Sentimental Hygiene was his strongest album since Warren Zevon in 1976.

While a few members of the L.A. Mellow Mafia (David Lindley, Waddy Wachtel, Don Henley) made cameo appearances on the album, for most of the sessions Zevon worked with Peter Buck, Mike Mills, and Bill Berry of R.E.M., who were about a year away from their mainstream commercial breakthrough; they made for a solid, no-nonsense rhythm section, and gave the music a passionate, forceful backbone that was largely absent from The Envoy (not to mention rocking harder than one might expect from the kings of jangle pop).

Zevon put his newly muscular sound to good use; the songs on Sentimental Hygiene are Warren Zevon at his flintiest, as he indulges in his usual obsessions with machismo ("Boom Boom Mancini") and bad love (the title cut) while also exploring the media's skewed perspective on his addiction problems ("Detox Mansion," "Trouble Waiting to Happen"), his disgust with the music business ("Even a Dog Can Shake Hands"), and errors in both personal and political judgement ("Bad Karma," "Leave My Monkey Alone").

And Zevon scored three inspired musical guest shots on the album — Neil Young, whose jagged guitar runs embroider the title cut; Bob Dylan, whose howling harmonica is the ideal punctuation for the Springsteen-gone-psychotic "The Factory"; and George Clinton, who adds a bed of menacing funk to "Leave My Monkey Alone." Sentimental Hygiene proved that Warren Zevon was still an artist to be reckoned with, and that which didn't kill him had only made him stronger (and more bitterly funny).