"William Wallace was born in 1860 and, like Hamish MacCunn (see Hyperion CDA66815), was a son of Greenock. His father, James Wallace, was a distinguished surgeon who may have had to examine his own son when the latter graduated MB and MCh in 1885 at Glasgow. University. William went on to study ophthalmology at Glasgow in 1888, about which time he published words and music of a Carmen Glasguense in honour of the university, the bold cover design of a student with mortar-board, books and symbolic Hebrew letter Shin being his own. The student, in doctoral gown, is probably a self-portrait, the letter Shin meaning 'song', being like a W for William Wallace, and also representing the eye and having symbolic associations with the six- bar phrases of the music and six-line poetic structure. (This is shown on the reverse of the CD booklet)

But for Wallace the ear was to prove stronger than the eye and he finally settled on music, studying at the Royal Academy of Music, though only for two terms, and thereafter teaching himself. He was one of the six rebels, including his younger contemporary Bantock (also the son of a Scottish-based surgeon), who challenged the conservatism of the music schools of the time. With Bantock (see Hyperion CDA66450, CDA66630, CDA66810) Wallace published The New Quarterly Musical Review, frequently editing it with Anderton when Bantock was away. In a letter of 1904 Wallace asks that the Royal College of Music jury give 'a chance to even the most bizarre and so-called eccentric compositions that are sent in'; with respect to controversies at the Leeds Festival he intends to 'march in the direction of the guns' ! In 1964 Neville Cardus described Wallace as 'a composer who was one of the first in the progressive movement of seventy years ago', and some years later, praising The Passing of Beatrice and Villon, recalled Wallace's Freebooter Songs, 'one of which, called 'Son of Mine', I sang myself on smoky Saturday nights for a guinea a time'. It is a pleasing thought that such a progressive composer as Wallace was capable of writing words and music (not to mention designing the cover) for songs which were to achieve such popularity.

The Wallace household must have been a fascinating one, for he married the distinguished Scottish sculptress Ottilie Helen McLaren, daughter of Lord McLaren. Wallace dedicated his A Suite in Olden Style for piano to her. She was a pupil of Rodin and exhibited regularly at the Royal Academy, though in 1928 she was unable to enter so William promptly produced a painting, 'Waterloo Drum', of a corner of their own house in London and submitted it to ensure the family was represented. It was accepted and duly hung on the line.

The 1914-1918 War saw Wallace working more or less continuously in the Royal Army Medical Corp, from which he retired in 1919 with the rank of Captain. By the end of the War he was fifty-eight years of age, had taken only three weeks of leave and had reported on 19,000 cases over four years, many of which he had personally attended. He must have been completely drained. In his later years he became a Professor of Harmony and Composition at the Royal Academy of Music (and professorial chief of the library) when his fellow Scot and composer John Blackwood McEwen was Principal.

Wallace's major works include the fine Creation Symphony (first performed at one of Bantock's New Brighton concerts in 1899), the lovely Pelléas et Mélisande Suite of 1903, and a bitingly satirical choral ballad, The Massacre of the MacPhersons, which makes a ridiculous combination of snippets from Wagner's Ring and traditional Scottish themes. There are two further symphonic poems and a number of other pieces, all worthy of attention. Wallace is much more radical than Mackenzie or MacCunn, particularly in his freer development of structure. He also published several books on music theory and history. These include wide-ranging and challenging works analyzing the nature and development of the musical faculty in humankind; and studies of great insight into Wagner and Liszt, whose influence on his own music is clear. He died in 1940."

From the Hyperion Web Site

"It seems that no one has performed Wallace's Creation Symphony for nearly a hundred years and yet, in the history of the symphony in Britain, it is unprecedented in its scope and daring. The work guides us through the first few verses of the Book of Genesis, but not in the literalistic manner of, say, Haydn's Creation; rather Wallace conjures up intense emotions as a response to the contemplation of such poetic symbolism. (Many fascinating aspects of this symbolism are detailed by John Purser in the accompanying booklet, including strands interweaving Wallace's own life with the business of Creation.)

Wallace's Pelléas and Mélisande Suite predates the compositions by Debussy and Sibelius on the same theme by several years. It is a work of extravagantly heart-on-sleeve passion, and yet both this Suite and the equally rewarding Prelude to The Eumenides remain virtually unknown." 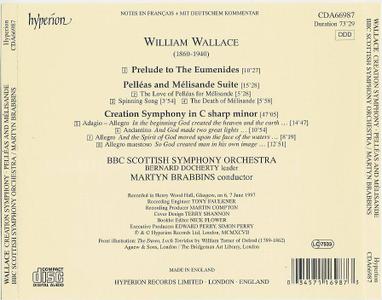 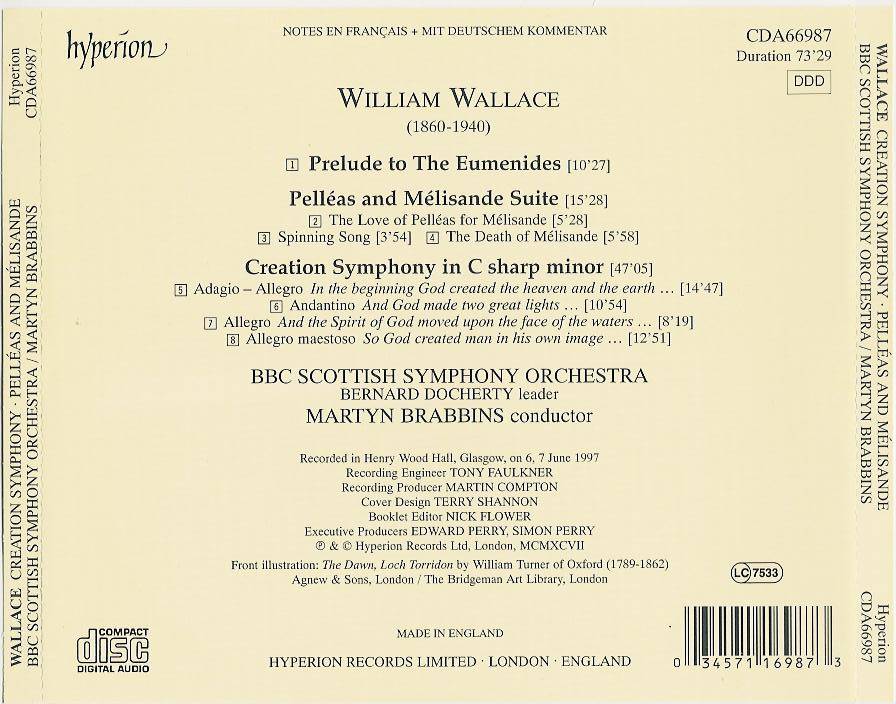 In this CD all three subjects are highly colourful and dramatic and Wallace gives them the full late romantic treatment in the expansive Germanic tradition. Influences of Liszt and Wagner are pervasive throughout.

The music for the Prelude to The Eumenides (1893) follows the character and outline of the Aeschylus story: the opening music driving relentlessly forward and seething as The Furies seek to punish Orestes for the murder of his mother Clytemnestra who had, herself, murdered her husband, Orestes' father. The contrasting conciliatory music represents the defence by Athene who pleads justifiable homicide and placates The Furies by offering them asylum, elevated status and a new name - The Benefactors. The Wagnerian influence is strong - one can hear snippets of Lohengrin, Tannhäuser and Meistersinger all woven into the fabric which is just that bit too extravagant - a little judicious snipping might not have gone amiss.

The lovely Pelléas and Mélisande Suite is the strongest work here, and it is interesting to compare Wallace's view with the writings of Debussy, Sibelius and Fauré. The Scottish composer's 1900 setting of Maeterlinck's symbolist drama, followed that of Fauré's incidental music for an 1898 production of the play and preceded Debussy's opera, completed in 1902 and the Sibelius Suite of 1905. Wallace's suite opens with the increasingly urgent and passionate The Love of Pelléas for Mélisande. Following the dramatic action, the music's subtle shadings seem to question the innocence of the lovers' passion and forecasts the ensuing tragedy. Wallace's charming Spinning Song, central movement, with its captivating waltz rhythms, is similar, in spirit, to Fauré's conception of this scene in capturing Mélisande's unaffected innocence - unlike Sibelius's interpretation which has dark and sinister undercurrents. Wallace conceives a vast and dark grief for The Death of Mélisande befitting such a royal tragedy - dramatic funeral drums and trumpets giving way to hushed misery voiced in the depths of the orchestra.

The Creation Symphony is written on a huge scale - some might find it over-inflated. It is Wallace's response to the Biblical story of the creation. Its four movements cover: (1) the creation of heaven and earth out of the void; Wallace opens the work with great orchestral daring - double basses divided and solo tuba - to represent emptiness and space; and he chooses C sharp minor as the main key to produce a dark veiled colouring before the gradual transformation to an ultimate calm hymn representing light (2) the light of the stars, moon and sun, is the most successful movement in the work with music of great beauty and imagination; the starlight section anticipating today's minimalist music; the moon music tranquil but not without passion; and the sunlight proclaimed in music of suitable majesty and splendour (3) the creation of land and sea is the least inspired movement while (4) the creation of man, is a powerful evocation of the human spirit of love and creativity, dressed in vivid orchestral colours."

The album is split in 6x50 MB and 1x17MB parts. Click HERE to get the archive with the download links. Password for everything is www.AvaxHome.ru. Files are on Rapidshare, and I don't want them to be mirrored elsewhere right now.

Comments are always welcome here or by PM!