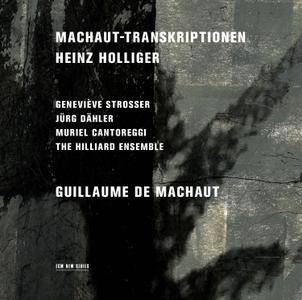 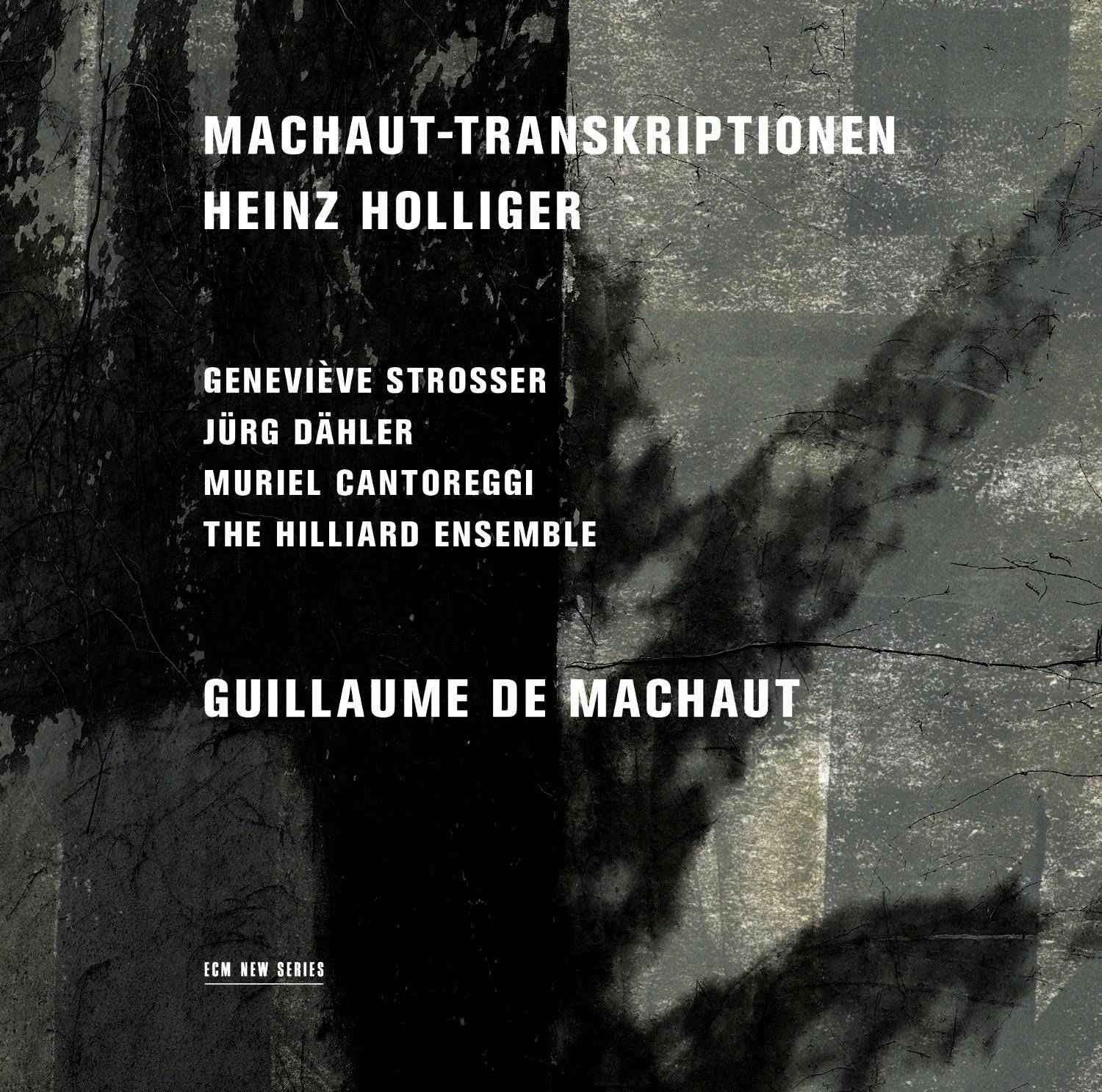 Swiss composer Heinz Holliger s Machaut-Transkriptionen is comprised of a spacious cycle of pieces written over a ten year period beginning in 2001. An imaginative re-investigation of the work of the great 14th century French composer-poet Guillaume de Machaut, it is scored for four voices and three violas. Note-for-note transcriptions of Machaut give way to Holliger s increasingly creative refractions of the music. As Holliger notes, his in-depth study of Machaut opened up new vistas for his compositional activity and his admiration for the source material is mirrored in the outstanding performances of the violists and singers. The Machaut-Transkriptionen proves a perfect vehicle for the Hilliard Ensemble s skills as interpreters of both old and new music, and this recording, made in 2010 in Zürich, captures the vocal group at the height of its powers.

The music on this album does not really include transcriptions as that word is used in English. What you get are three pieces by Machaut himself, performed in straightforward vocal versions by the Hilliard Ensemble, and six compositions by Heinz Holliger (known to average classical listeners as a Swiss virtuoso oboist, but increasingly active as a composer) that are designated as "nach Machaut" ("after Machaut"). All the Holliger pieces are for three violas. The first three of these are based on the Machaut pieces that precede them on the program, while the last three depart to a greater degree from Machaut: one adds parts to a monophonic lai; one is a free fantasy called "In(ter)ventio"; and the grand 15-minute finale brings the voices and instruments together in a reworking of a section of the epic poem La remède de fortune. Holliger's musical language gradually stretches that of Machaut until the link consists of little more than intervals and sonorities, but the final piece is still recognizably Machaut-derived; the use of the syncopation-like device of hocket is retained. Whatever you think of this whole thing, two contentions would be hard to argue with: first, Holliger has devised a neo-medieval language that is very much like nothing anybody else has done before; and second, it would be hard to find an engineering team more suited to the enterprise than that at the ECM label. Many possessors of good sound equipment will want this release purely for the almost frightening detail and clarity in the contrast of the vocal and viola groups, brought together by Holliger for a slam-bang finale. An unusually satisfying experiment involving the music of a composer whose legacy has still hardly been explored creatively.

Whether as composer, oboist, or conductor, Heinz Holliger never ceases to delight and surprise. His commitment to classical music has produced some of the most enduring documents on ECM’s New Series, including one of that imprint’s indisputable masterpieces, the Scardanelli-Zyklus. Here we have yet another turnaround, one that speaks with the open style in which Holliger has become so fluent. Featuring a host of accomplished interpreters—including the now-defunct Hilliard Ensemble—bringing to life a 21st-century cycle of works around the 14th-century French composer Guillaume de Machaut, the Machaut-Transkriptionen (2001-09) represent nearly a decade’s worth of thinking and rethinking through the past in a language of the future. Scored for an unusual combination of four voices and three violas, it weaves direct transcriptions of Machaut into Holliger’s idiosyncratic odes to the same.

This is one of those distinctively ECM projects, which, like Ricercar, unravels the avant-garde core of centuries-old music. The compact macramé, for example, that is Machaut’s hallmark is on full display in the program’s introductory Biaute qui toutes autre pere, wherein something more than ink and paper have convened to elicit vital sounds. If the feeling of this balladry is loving and sincere, even more so is Holliger’s enhancement of its rules in his own Ballade IV for three violins. More than ever before, Holliger has built his cathedral out of transparent stone, blacking out the windows, so that the sunlight might be its dominant form of expression. In this sense, Holliger is engaging with Machaut not as the target of an homage, but as the living force of an artist whose music breathes in the winds that shake his boughs. Use of untempered harmonics, transcribed note for note from the original, allows incidental commentary in this regard to seep through.

A second diptych, this time around Machaut’s Ballade XXVI: Donnez, Seigneur, transforms the gently sloping path of the original—in which countertenor David James at once renders the skin and the heart keeping it alive—into the wilder detours traced by the present recasting. And while the latter may seem more oblique in its structure, it also shares with its referent a clarity of expression. Both are neural mappings, very much alive in and beyond the confines of a single recorded performance. Even the wordless Hoquetus David of Machaut and Holliger’s responsory Triple Hoquet feel more like pieces of the same puzzle than distant cousins separated by time. Holliger gives us something of a granular synthesis of the former, an embodiment of Celan’s hurricane in the fullest sense.

A single voice retains the melody of Machaut’s Lay VII in a standalone arrangement, while guided improvisations flesh out its branches with unpredictable fruit. The Hilliards are best equipped to handle this flower without damaging a single petal. A beautiful piece that challenges not through its dissonances but through its consonances, as does its analogous In(ter)ventio a 3 und Plor- / Prol- / Or- atio for three violins, which from recitative beginnings morphs into a staggered prolation of time signatures, based on the Complainte of Machaut’s Remede de Fortune. That same piece lingers on in the final statement, in which it is combined with an “Epilogue” that unites voices and strings in quadrilateral fashion, distilled until only friction remains.

In a universe of countless musical systems, Holliger and his celestial body of work have always charted unprecedented orbits through the space-time continuum. Given the way in which he has refracted himself through Machaut, the sublimity of their intersection is clear, for both have stumbled on the fragility of human contact, tracing its origins just shy of rupture. 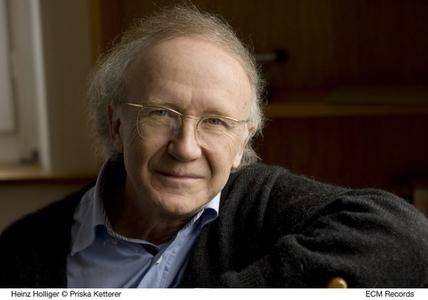 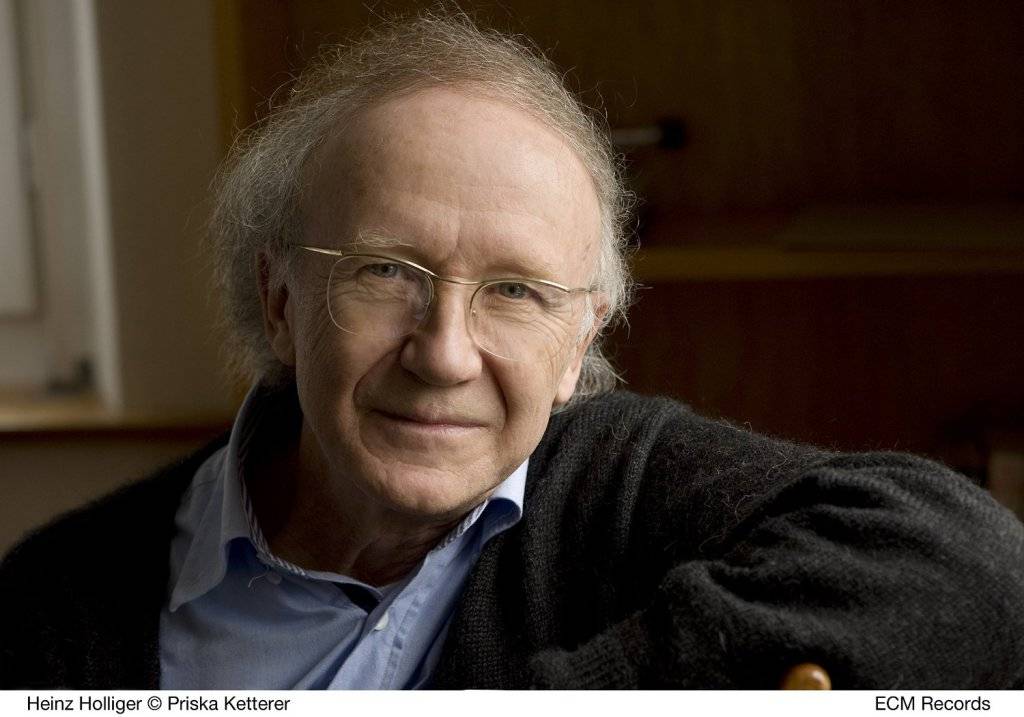 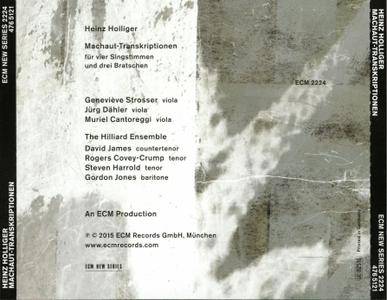 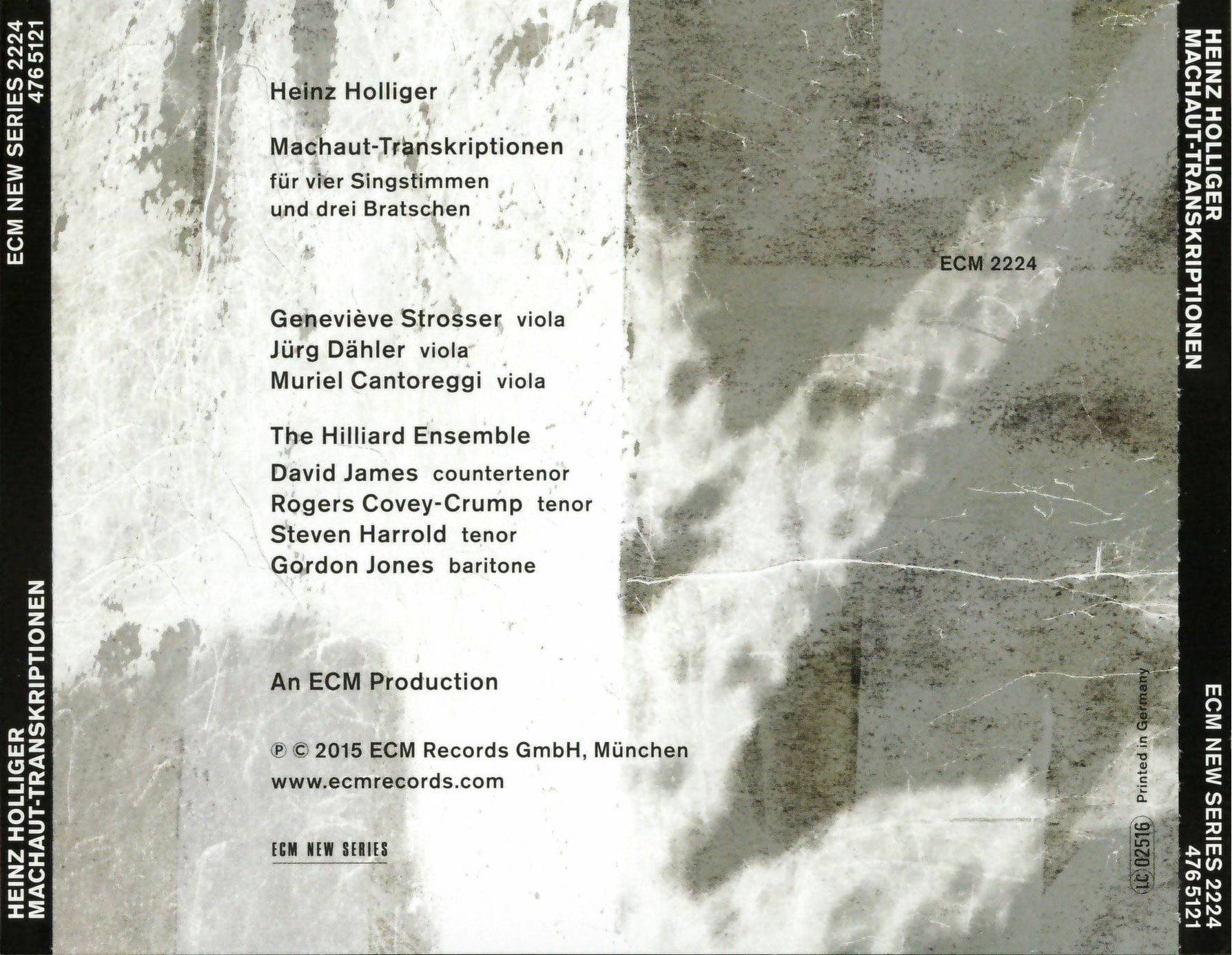