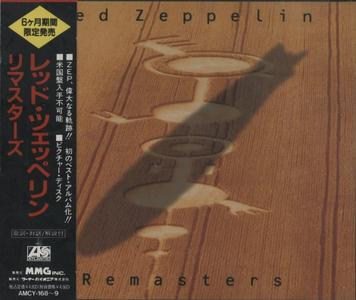 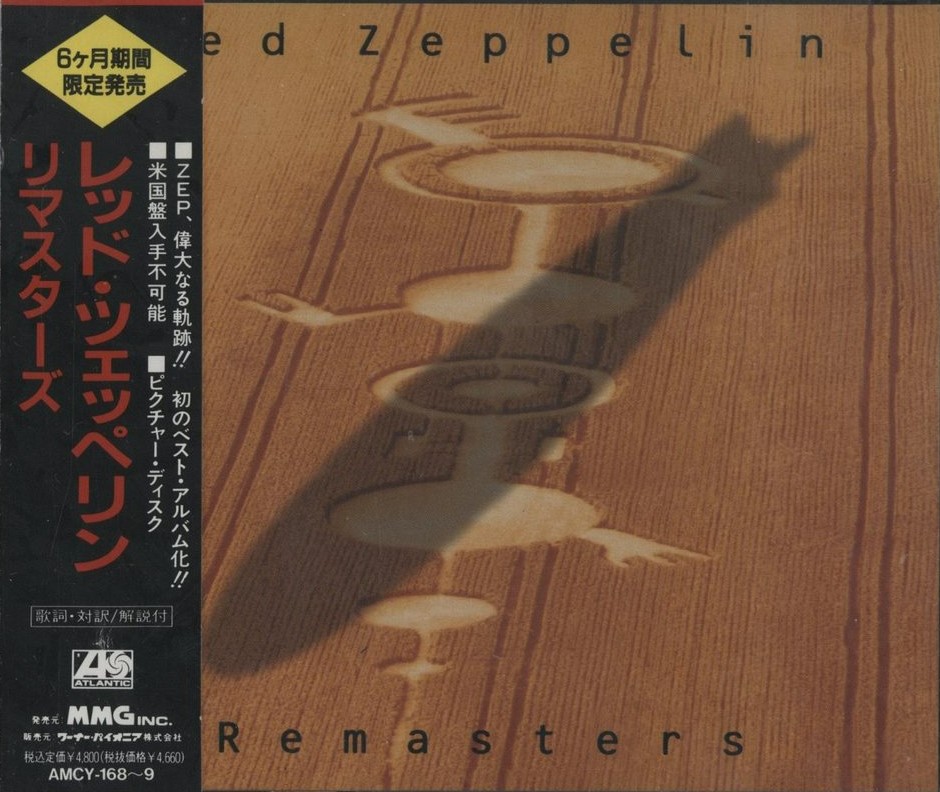 Nowadays, what's the point of chronicling this "Remasters" when the group released "Mothership" in 2007, which makes it obsolete? Because this record is historic. It is the first to be officially released under the LED ZEPPELIN name since "Coda" in 1982. The 1985 reformations for Live Aid and the 1988 reformation for the 40th anniversary, with Jason Bonham behind the sons, son of the late John n ' will have been occasional and here, there is no place for a fanfare of the Airship. Jimmy Page just wanted to deliver a compilation worthy of the name years after the band's smashing debut, years after a half-hearted ending. How many of you have known LED ZEPPELIN with this "Remasters"? How many of you have had a breath of nostalgia when you saw this cover?
Personally, my initiatory journey of the Airship began with the "II" or the "IV", at about the same time, between a friend who owned one, my brother-in-law who lent me the other. Adolescence, with "Whole Lotta Love" and "Stairway To Heaven" in the ears, was still making college more bearable. Then I came across this record, this double CD with a superb jacket, which represents so much what the group is! These crop circles with the shadow of the Lead Airship hovering above, that's so much that, Page could not have found better and in my opinion, it is one of the most beautiful of the group, one of the most telling with the first, with the Hindenburg in flames.

And obviously, when you're young, the first record seems the most appropriate. When we are looking for thrills (ok, don't judge me!), It is the most indicated, centered as it is on the first four albums, the wildest, the most sexual. Robert Plant looked like a blond, animal and lewd angel at the same time, Jimmy Page being his obscure counterpart. John Bonham was a born slugger, with precise and abrupt playing, who struck his drums and cymbals like a deaf or as if tomorrow did not exist while John Paul Jones, his tandem on bass, although unobtrusive, was a essential elements of the group, the little cog that kept everything running smoothly. Much like QUEEN, the group was running on these four entities and couldn't seem to exist otherwise,

And start listening to "Remasters" with "Communication Breakdown", it's class. A powerful piece, violent for the time, with a group which is reached by the sacred fire. The best possible start, certainly, which gets the adrenaline pumping from the first seconds. It sounds like one of the possible Hard Rock birth certificates, but the genre was sired by a woman who had known many lovers, and the lineage is difficult to define. Then hard not to be stunned by the superb "Babe I'm Gonna Leave You", not to be captivated by the terrible solo of "Dazed And Confused". With these three pieces, we understand that Hard Rock was born from Rock, by extension of Blues, and that it contains an absolutely remarkable Folk sensibility.

The whole first disc is a succession of great telluric slaps ("Whole Lotta Love", "Heartbreaker", "Immigrant Song" …) and more delicate compositions, where Folk accents are very present ("Ramble On", "Celebration Day "," The Battle Of Evermore "…), without forgetting the flavor of the cotton fields (hum… Ok, we will say that I did not write anything like this) through often magnificent Blues, like "Since I've Been Loving You", electric and epileptic at the same time, with a literally inhabited Robert Plant. Goosebumps guaranteed. And it rises crescendo until "Stairway To Heaven". Of course, this is the obvious. QUEEN a "Bohemian Rhapsody", LED ZEPPELIN "Stairway To Heaven", the piece that is immediately quoted as soon as the group is mentioned. A moment of poetry with an irresistible rise in power.

And inevitably, when you're young, all that is the bomb (well, if you like the style, because if you only swear by METALLICA or IRON MAIDEN, it will quickly seem very soft). Also, when you're a kid, the second record is more difficult to understand because the whole thing seems … Disjointed? Slow to die? It must be said that the group had let time pass between the "IV" and "Houses Of The Holy" and the musicians took advantage of this break to soak up the taste of the day and to evolve their style, exploring new directions, like "D'yer Mak'er" which is a completely unexpected Reggae in the Airship's repertoire. Frankly, even today I sometimes don't know what to think of this song,

But again, pieces titillate the ear. "Kashmir", obviously, with its irresistible oriental atmosphere which will have given rise to the genre. Then the tempered steel riff of "Achilles Last Stand" (I certainly already told you how much I love this track), as well as the darker atmosphere of "In The Evening" which knows how to be seductive. But when you're young, easily influenced, and in search of things that beat you up (the next one who says "you shouldn't listen to LED ZEP", I smoke it. Seriously.), The second part of the Airship's career is much more difficult to understand. . In fact, it deserves a little more and that is the kid turned adult who tells you. And the opinion that will follow is not recent, it came at an age when tastes are refined and when the understanding of music is becoming sharper. LED ZEPPELIN had nothing more to prove in the field of Hard Rock and he could afford to do what he liked, to push his limits even further, for lack of the limits of the genre. And the group was magnificent in their melodic research.

One of the best examples is the song "No Quarter", which easily rivals "Stairway To Heaven", but which will always remain in the latter's shadow. The group understood everything here and delivered a strong performance, rich emotionally, an emotion that we will often find on this disc, like "All My Love", very rightly saved from "In Through The Out Door", opus often underestimated because less fundamentally Hard Rock than its big brothers. Songs often quite long, which take the time to develop, reflect and which often require more than one listening to release their secrets.

The most assiduous among you will have already noticed that "Coda" is absolutely not represented on these "Remasters" (oh yes, I did not specify the origin of the name of this compilation. Jimmy Page made a very good job of cleaning up and remastering the original tapes). This disc is made up at the base of live songs, discarded titles as well as some unreleased ones, nothing very transcendent, nor even magic. Album haunted by the absence of John Bonham, it is radically different from the others, inconstant, going all over the place to go nowhere. Its absence of representation is, in the end, not really surprising, the rest offers the essential, by making some very logical dead ends (it would take a third disc otherwise). Afterwards, the goal of this compilation is to introduce the group,

And "Remasters" is necessarily a generational record. Those who are new to LED ZEPPELIN, or who will learn more about the band with "Mothership" will have the same kind of affinity with it as those who were there in the days of "Remasters". It's pure nostalgia and a nostalgia that still works, years later. Personally, even if it's been years since I completed my collection around the group, I often get this compilation out when I want to listen to ZEPPELIN, other than "III" or "Physical Graffiti". And more and more, it is the second CD which turns, the tastes coming to be refined with time. If you only need one, this one or "Mothership" may do the trick.

All thanks to Original Re-leaser.