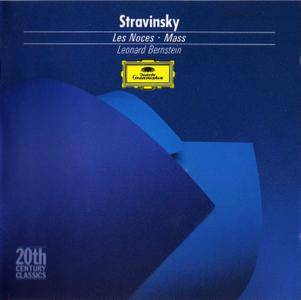 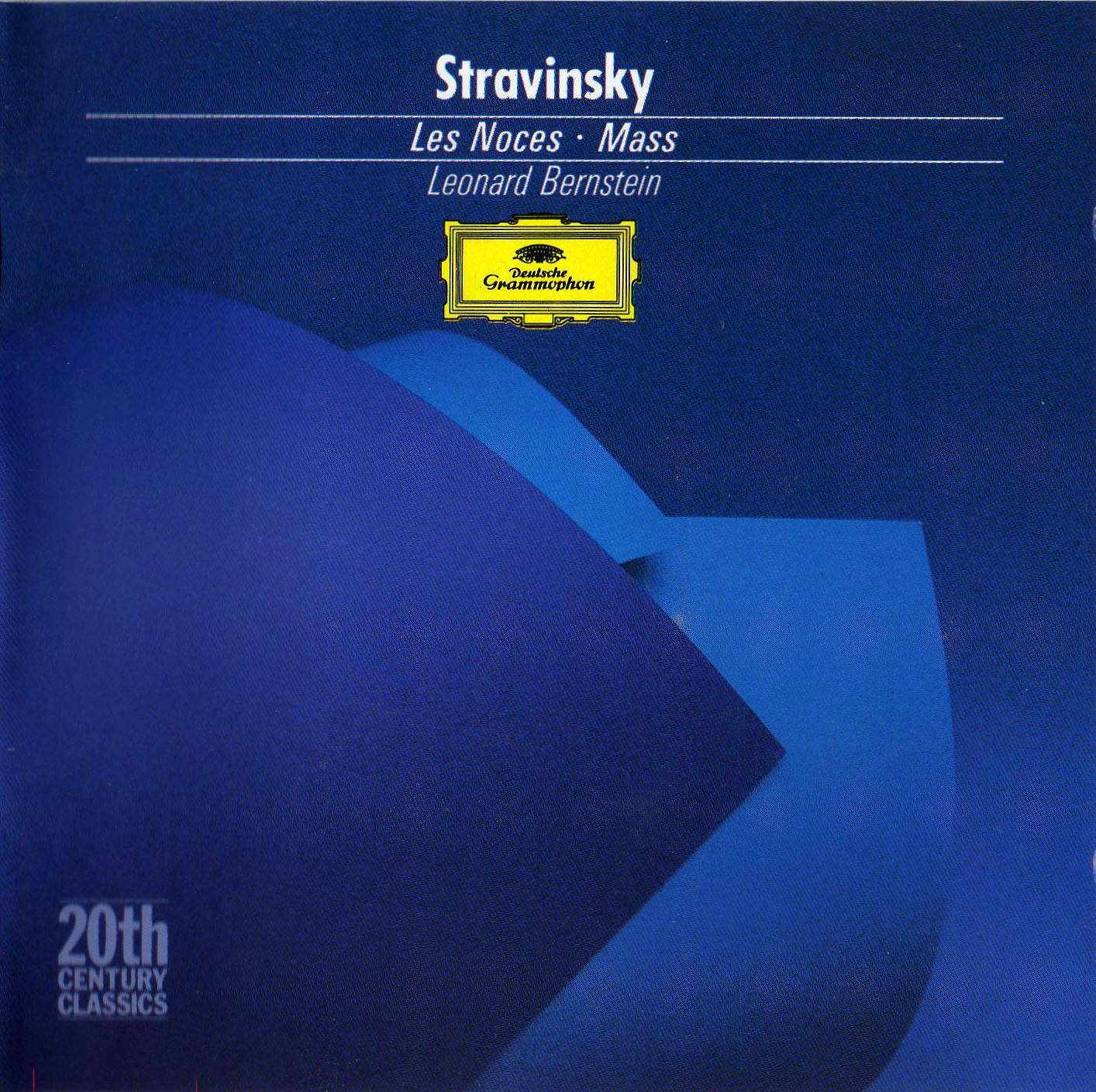 Though this piece didn't reach the stage in its final form until 1923, Stravinsky conceived the idea for a "dance cantata" about a 19th-century Russian peasant wedding 11 years earlier, when he was still working on The Rite of Spring. He began the score in earnest in 1914, by which time he was living in Switzerland. Though composition was interrupted by work on the burlesque Renard, he had finished Les Noces (The Wedding) in the short score, with solo voices and four part chorus, by 1917.

Then, however, the problems began. He first began scoring the opening scene for a vast orchestra of 150 players, but soon abandoned that as impractical, and tried out the idea of a standard orchestra separated into groups. After that he tried out a smaller ensemble containing a player piano, harmonium and two cimbaloms, but the problems of synchronisation between the automatic instrument and the live performers seemed insurmountable. Finally, in 1921, he settled upon the extraordinary sound world of Les Noces that we know today - the vocal parts accompanied by two groups of percussion, one tuned (and containing four grand pianos) and the other untuned.

It is one of Stravinsky's most remarkable achievements, in which his Russian musical inheritance is presented without any civilising filters. But for a work of such originality and raw power, Les Noces is surprisingly under-represented on disc. There is a performance from 1958, conducted by the composer himself, in which the four pianos are played by the composers Aaron Copland, Samuel Barber, Lukas Foss and Roger Sessions (Sony). It's a remarkable historical document, but the singing is not really top class and the sound shows its age. The Russian Pokrovsky Ensemble couple the cantata with powerful performances of a group of Russian folk songs related to the poems Stravinsky used - a fascinating exercise in historical musicology (Nonesuch). Most recommendable of all, though, is Leonard Bernstein's 1977 account recorded in London with the English Bach Festival Chorus and a quartet of pianists that includes Martha Argerich and Krystian Zimerman. Coupled just with an equally energised account of the Mass, it's short measure for a full-length CD, even at mid-price, but absolutely compelling.

Review by Andrew Clements, The Guardian

As a tenor in the chamber choir at the University of Michigan School Music, I was totally unfamiliar with "Les Noces" when our conductor, Thomas Hilbish, decided we would perform it one term (along with Bernstein's "Chichester Psalms"). I have to admit that during the first rehearsals I had no idea what to make of the music. But as the term went along it really grabbed me. When I finally heard it with the percussion and four pianos I was blown away. That final sound of the pianos and the chimes still haunts me.

"Les Noces" took the strangest and most convoluted development path of all his pieces. He went to Russia in 1914 to get some source material that did end up in several works. However, his first work on this piece included a very large orchestra. Over the course of ten years he tried various combinations, including one with a pianola, before settling on the final version we have here. It was originally conceived as a dance-cantata and was danced in its early years, but when performed nowadays, like the great early ballets, it is most often performed as a concert piece.

One of the problems for performing this clearly great masterpiece is that it is in Russian. It doesn't really tell a story, but provides snippets of dialogue around a peasant wedding in Russia. Also, the soloists do not strictly represent characters. The soprano is the bride to be, but also the Goose. The groom is sung by the tenor, but after the marriage the bass sings the husbands words. But the Russian is a problem because it is so difficult for non-Russians to sing. There is a French translation (hence the name we use "Les Noces" for "The Wedding"), but Stravinsky did not like what it did to the work. He even worked on an English translation for a recording in 1959, but gave it up. So, Russian it is. Now, the real choice is do we perform the work with singers singing Russian approximately to badly or do we only allow Russians to perform the work, which would be nearly never. Obviously, we want performances in the best Russian we can get, but we do want performances. Just as we are willing to accept Bach in poor German, and Verdi in bad Italian and so forth.

The performance here is pretty darn good. The rhythms are punchy and layered. We also get four really good pianists. Two of them are great pianists: Martha Argerich and Krystian Zimmerman. The soloists are also quite fine. The whole thing comes off quite well. I also like the disk of this work and others conducted by James Wood and the New London ensemble and recommend that to you as well.

I also find it interesting that its premier in England in the mid-twenties was received so poorly that H.G. Wells wrote a note condemning its critics and providing great insight to the importance of the work. It was printed and handed out with the programs.

The Mass is also a very important work by Stravinsky from twenty years later. It is performed well here. It is a work for chorus, soloists from the chorus, and double wind quintet and was intended by Stravinsky for liturgical use. The harmonies and counterpoint are all quite beautiful and he makes it easy to hear the actual text of the mass, which Bernstein also emphasizes well. This recording uses trebles (boys voices) instead of sopranos as the composer indicated. 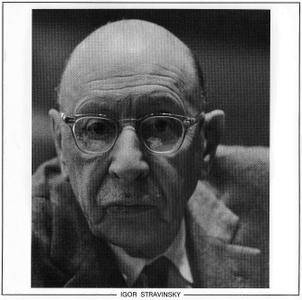 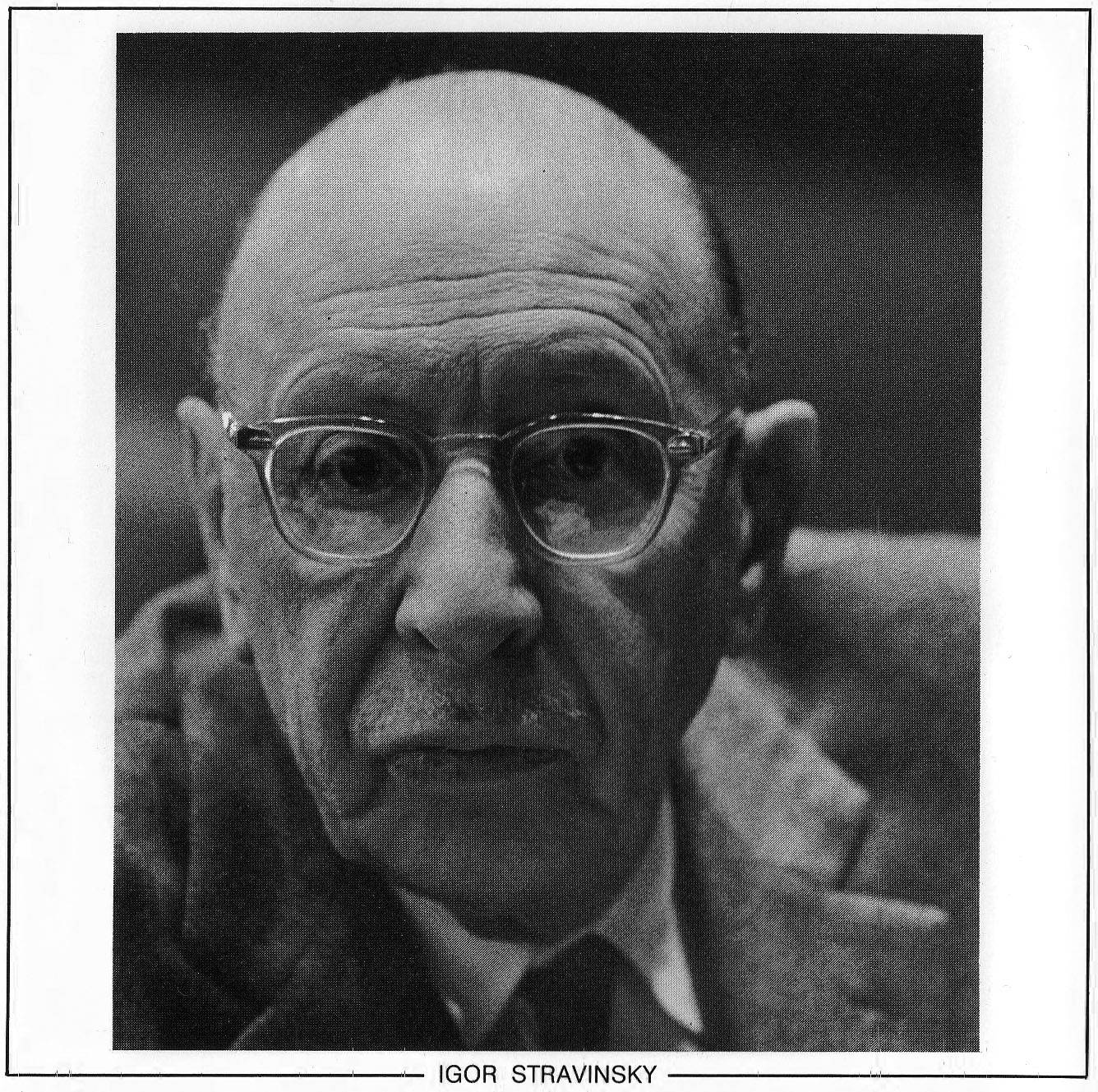 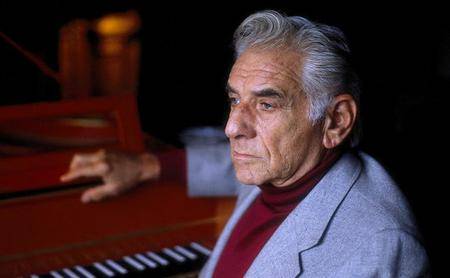 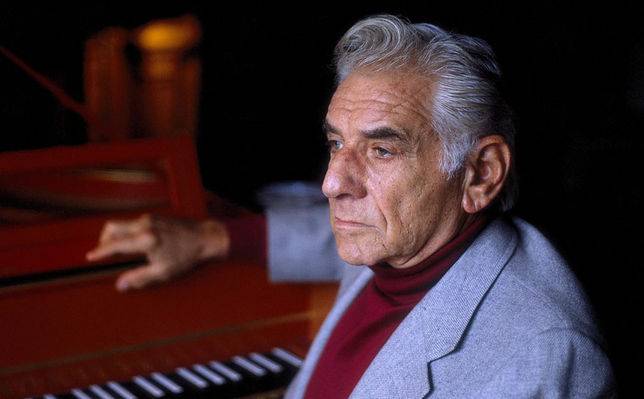 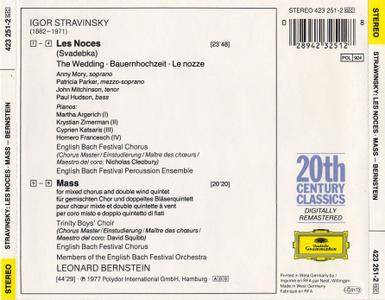 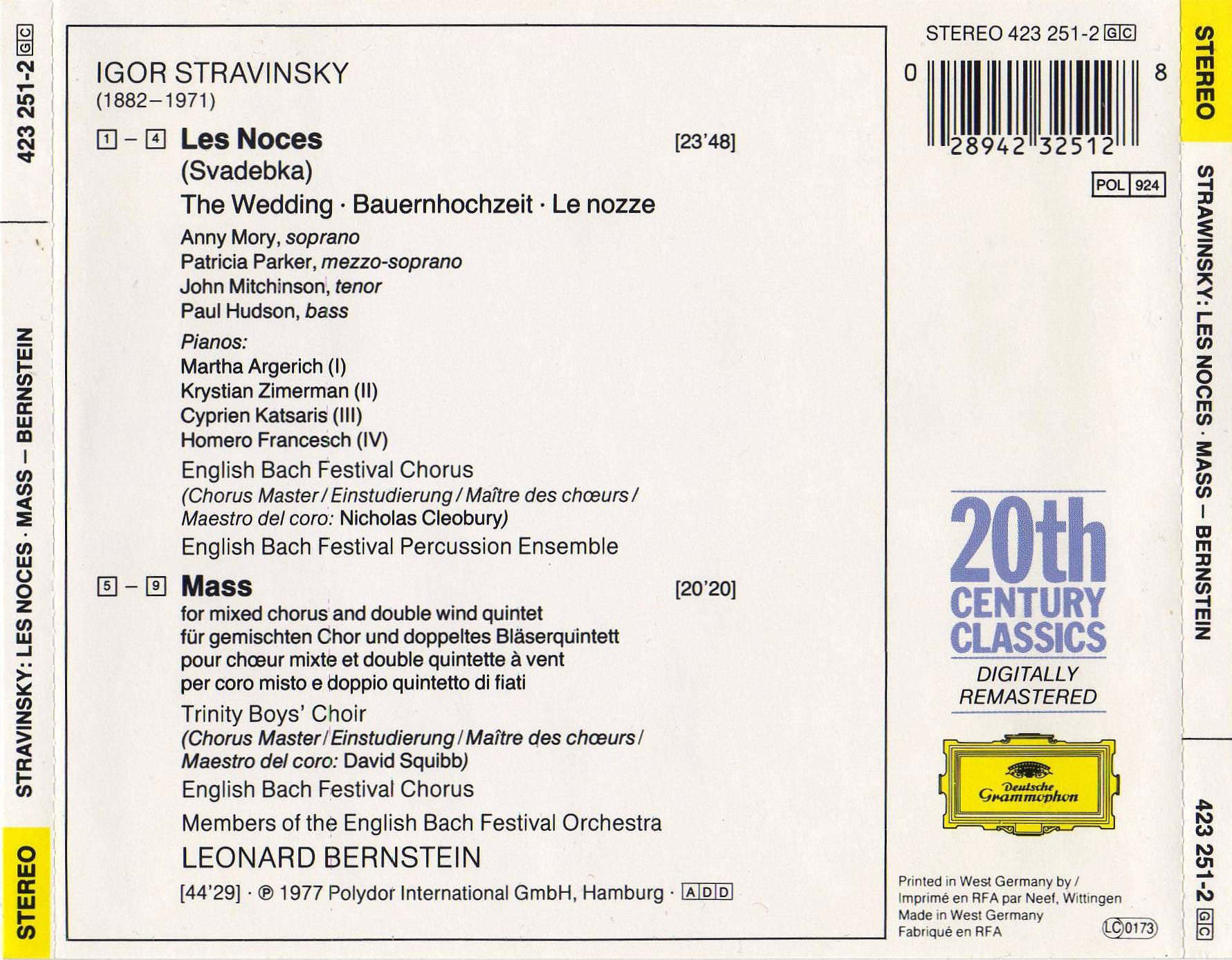 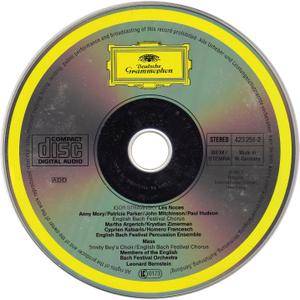 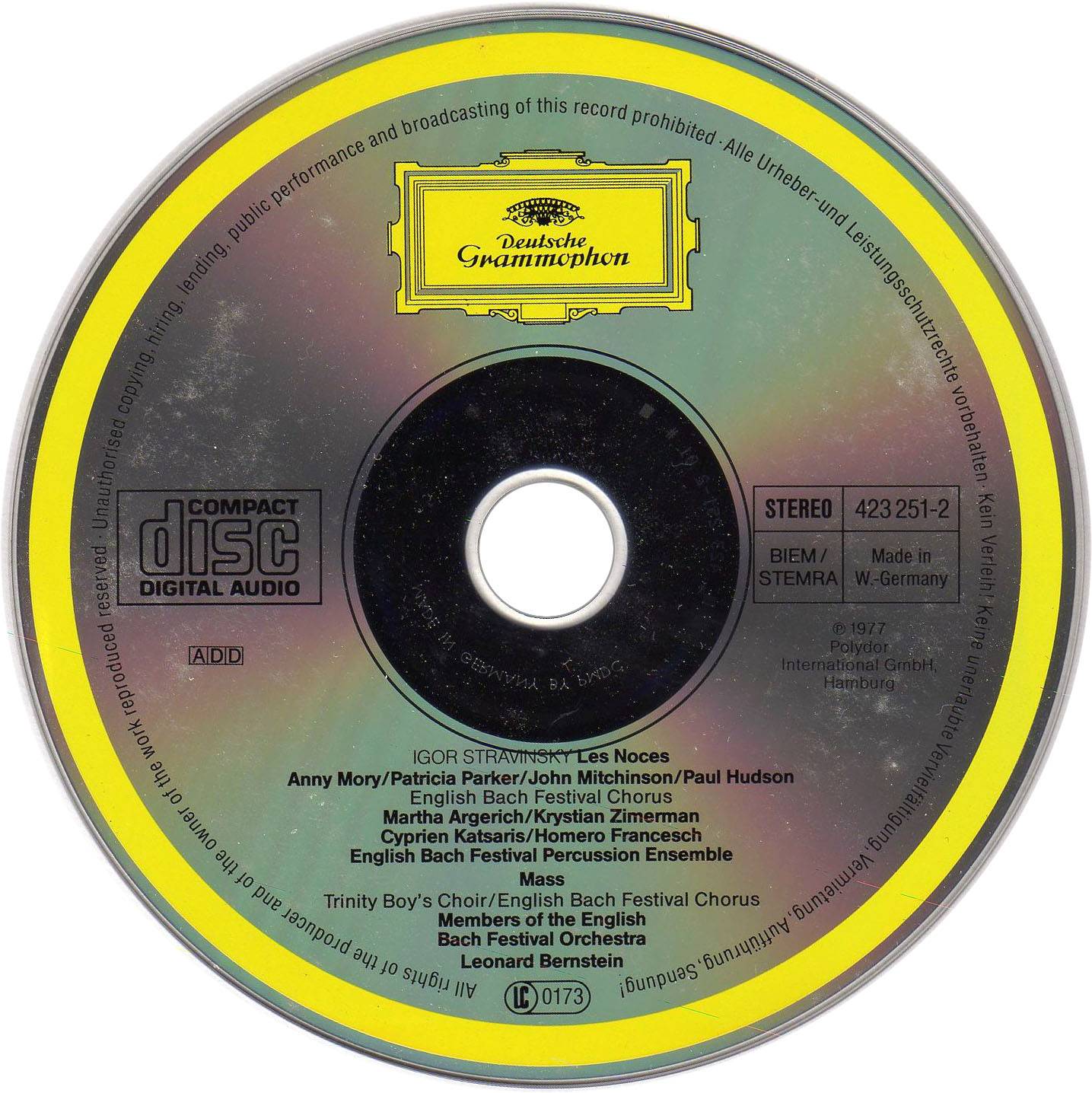