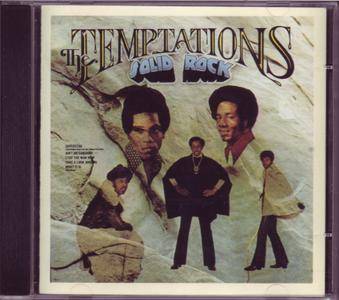 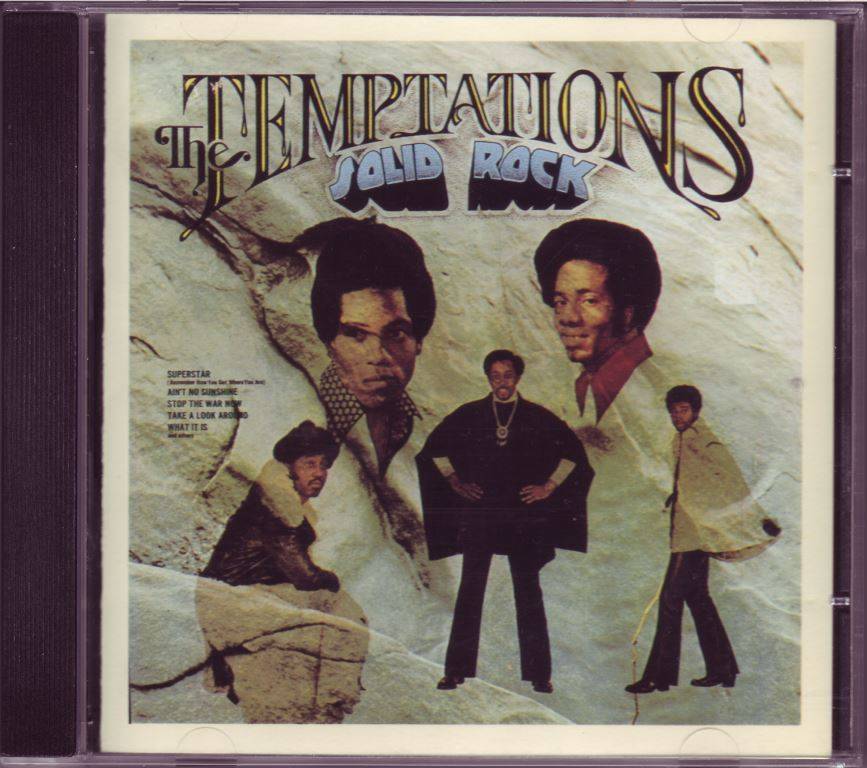 "Solid Rock" is a 1972 album by The Temptations for the Gordy (Motown) label, produced by Norman Whitfield. The LP was the first made primarily without founding members and original lead singers Eddie Kendricks and Paul Williams. Frustrated by conflicts and fights with Temptations Otis Williams and Melvin Franklin, and producer Whitfield's steadfast insistence on producing psychedelic soul for the group when they really wanted to sing ballads, Kendricks had quit the act and negotiated a solo deal with Motown's Tamla label. Paul Williams, on the other hand, had fallen ill due to complications from sickle-cell disease and six years of untreated alcoholism. Physically incapable of performing any longer, Williams followed his doctor's advice and retired from the act, although he remained on the Temptations' payroll as a choreographer until committing suicide on August 17, 1973. Williams's final Temptations recording, "It's Summer", is the only song on Solid Rock that includes his vocals. The Temptations group's paranoia-laced "Smiling Faces Sometimes", a Kendricks-led tune from the Sky's the Limit LP, was already slated as the follow-up to the number-one hit "Just My Imagination (Running Away with Me)". With Kendricks now gone, and with the group lacking a first tenor to take his place, Norman Whitfield was forced to change plans. Whitfield took the temporarily four-man Temptations and re-recorded "It's Summer", the b-side to "Ball of Confusion (That's What the World Is Today)", as a replacement release. "Smiling Faces Sometimes" was instead released as a single for The Undisputed Truth, and became a Top 5 hit on the Billboard Hot 100. Meanwhile, "It's Summer" peaked at number fifty-one on the Billboard Hot 100, making it the first Temptations single to miss the Top 40 since 1963's "Farewell My Love". Although Paul Williams kept up an alliance with the Temptations, Kendricks and fellow ex-Temptation David Ruffin vocally spoke out against the group (and Otis Williams in particular) in several 1971 interviews. As a result, the Temptations and Norman Whitfield released the single "Superstar (Remember How You Got Where You Are)", which addressed the rivalry and called Kendricks and Ruffin out as sell-outs. "Superstar" was the first Temptations song to feature Eddie Kendricks' and Paul Williams' replacements, Damon Harris and Richard Street. Ricky Owens from The Vibrations had been the Temptations' original choice for a new first tenor, but Owens only remained with the group a few weeks before being replaced. "Solid Rock"'s third single, "Take a Look Around", was a Top 30 hit which showcased Harris' Kendricksesque falsetto voice alongside the leads of Richard Street, Dennis Edwards, Otis Williams, and Melvin Franklin. "Take a Look Around" and several of the album tracks, including "What It Is?" and "Stop the War Now", were more of Norman Whitfield's psychedelic soul recordings. By 1972, such songs were being seen by critics and the public as outdated or heavy-handed, and the Temptations themselves became uninterested in the psychedelic songs. Whitfield began adding stronger soul and funk influences to future message tracks, reducing the psychedelic influences present in these and earlier such songs.

"Solid Rock" spawned two hits, the rockish "Superstar (Remember How You Got Where You Are)" written by Barrett Strong and Norman Whitfield with David Ruffin foremost on their minds, and "Take a Look Around," a slow lilting social commentary number featuring Richard Street and Damon Harris. Whitfield put a totally new arrangement on "Stop the War Now," popularized Edwin Starr and turned the rocker into a mammoth head song. It begins with bass singer Melvin Franklin reciting the Lord's Prayer on top of a slow syncopated beat before mushrooming for more than 15 minutes into some classic-'70 psychedelic music wherein Whitfield made good use of his bag of studio tricks. Every time you listen you hear something new. It was not for everybody though, as many thought it was a waste of space and weird beyond comprehension. A rendition of Bill Withers' "Ain't No Sunshine" is one of the better cuts, Street and Harris again take turns at lead, while the others perform their background gymnastics. Whitfield was known for recording the same song with different Motown artists, varying the arrangements to keep them from sounding similar, but on "It's Summer" he went one better by recording the same song on the same group twice; this version has Dennis Edwards singing lead, the previous version was led by Melvin Franklin, both versions are equally as effective, on this rendition Franklin's low bass plays a prominent role in the background, and the Temptations' harmonies are heavenly. Two other cuts, "The End of Our Road," and "What It Is," are indistinguishable remakes. "Smooth Sailing" led by Damon Harris, is an upbeat tune about being in love that lacks bite and is saddled with adolescent lyrics. 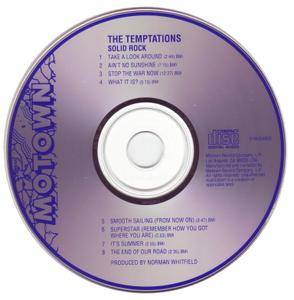 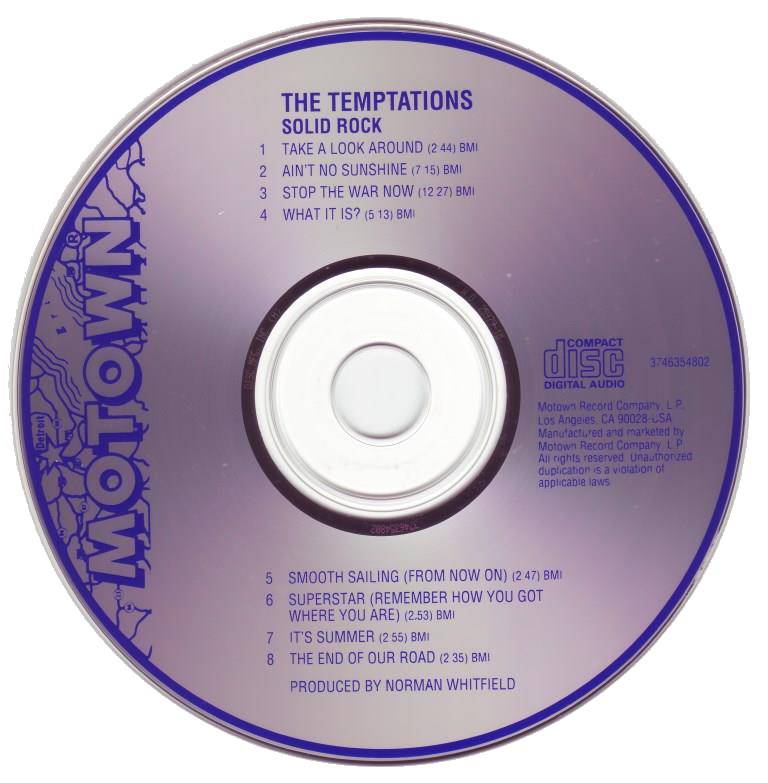 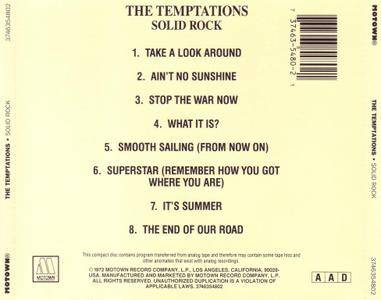 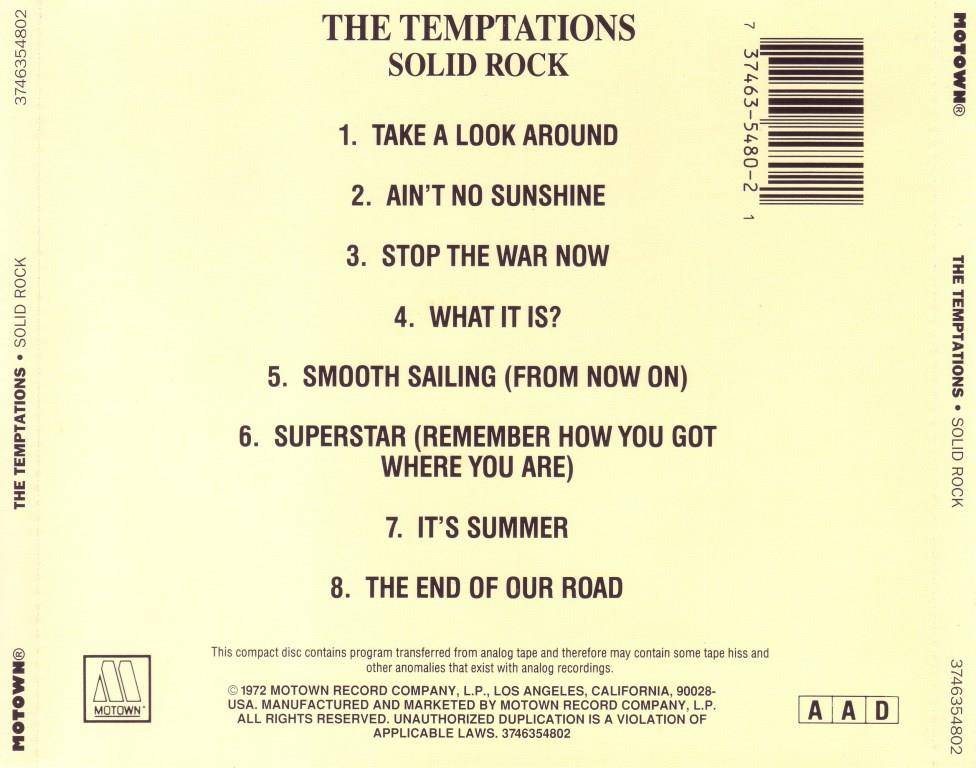