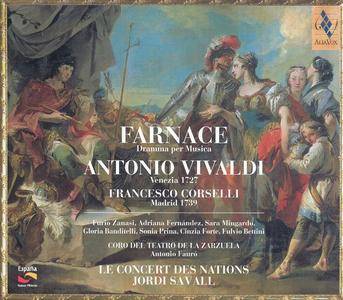 Farnace was apparently one of Vivaldi's favorite operas, because he mounted numerous productions in various cities, and wrote six versions of the score, more than of any of his other operas. The conventions of operatic vocal characterizations that came to be standard – higher voices in the sympathetic roles, and lower voices in villainous roles – had not yet been established, and Farnace features a baritone and contralto in the heroic roles, with a soprano as the villain. Soprano Adriana Fernández shines as the wicked Berenice, who is redeemed at the very last minute. She has a full, creamy voice that she deploys appealing agility and warmth. As Tamira, contralto Sara Mingardo sings with power, authority, and deep feeling. In the title role, baritone Furio Zanasi is appropriately heroic, with a rich, refined timbre and the expressive depth to create sympathy for the conflicted protagonist, but he doesn't always have the necessary strength at the bottom of his range. One of his arias, the lyrical and poignant "Gelido in ogni vena," is among the composer's loveliest creations.