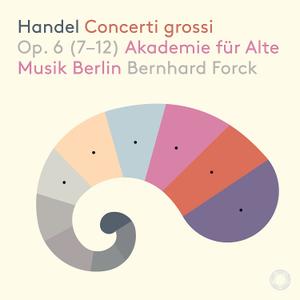 The Akademie für Alte Musik Berlin continue their Handel trilogy with this recording of the last six concerti grossi of the composer’s Op. 6. Originally designed as attractive interludes to English oratorio performances, Handel’s concerti grossi soon gained fame as some of the most appealing orchestral music of the baroque era. With these pieces, written in London towards the end of his career, Handel paid tribute to the immensely popular concerti grossi of Corelli while simultaneously proving his mastery, incorporating all musical styles of his times into his work. 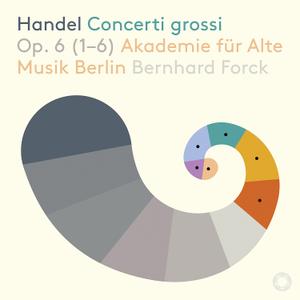 The Akademie für Alte Musik Berlin kickstarts their Handel trilogy with this recording of the first six concerti grossi op. 6. Originally designed as attractive interludes to English oratorio performances, Handel’s concerti grossi soon gained fame as the most appealing orchestral music of the baroque era. Written in London in 1739, towards the end of his career, Handel paid tribute to the immensely popular concerti grossi of Corelli while simultaneously proving his mastery incorporating all musical styles of his times. Led by their concertmaster Bernhard Forck, the players of the Akademie für Alte Musik Berlin demonstrate why many consider them the best baroque ensemble of today. This first installment will be followed by the last six concerti grossi op. 6, as well as a recording of the concerti grossi op. 3. 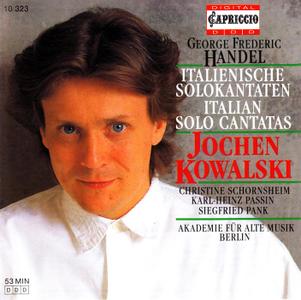 Actually, Jochen Kowalski wanted to become a heroic tenor. However, his mentor Marianne Kupfer, wife of stage director Harry Kupfer, made it clear to him during his audition at the Komische Oper Berlin – his principal stage until today – that: “Handel is your Wagner”. This was the beginning of the artist’s one-of- a-kind career, whose entire life had always been defined by the power of music, even in early childhood. Although he was initially apostrophised as Countertenor, he unperturbed emancipated himself as Altus, characterised by a higher level of vibrato. Therefore, Jochen Kowalski’s singing technique provides us with a realistic picture of what once enthused half of Europe: castrato chant. 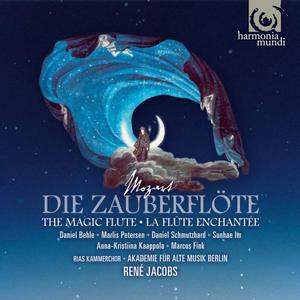 With the belief that “No opera loses so much as Die Zauberflöte if one strips it of its drama and that means, above all, the spoken dialogue,” René Jacobs’ agenda in Die Zauberflöte is to rehabilitate the reputation of Schikaneder’s libretto. At the heart of his reassesment is the idea that Schikaneder and Mozart’s Masonic message is deeper and more carefully presented than we have thought. He suggests that seemingly silly or inconsistent aspects of the story are put there as intentional false paths as the audience, not only the prince and the bird catcher, undergoes its own trials of initiation. The opera’s symbolism and structure are explained in convincing detail in an essay in the booklet by the Egyptologist and Mozart researcher Jan Assman. 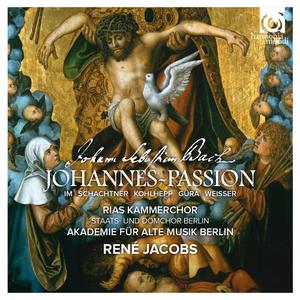 Bach revised his Johannes-Passion regularly: he returned to it over a period of twenty-six years, from 1724 to his death. It is the version hallowed by tradition, established by the Kantor a year before his death, that is presented on these CDs. But the 1725 version, equally outstanding musically, has also been recorded complete and can be downloaded as a bonus in high-resolution sound. Comparison of the two versions reveals the underlying meaning of this matchless Passion. 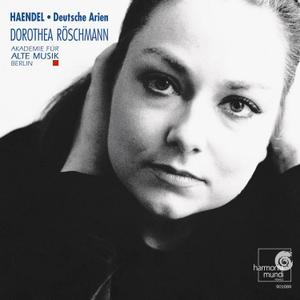 George Frideric Handel and Hamburg town councillor and poet Barthold Heinrich Brockes were students at the same time in Halle, and it's probable that they knew each other and were perhaps even friends. Brockes wrote a nine-volume anthology, from the first volume of which Handel, between 1724 and 1727, set his Nine German Arias. In translation, the Brockes work is titled "Earthly Delight in God, Consisting of Physical and Moral Poems," the texts reflecting pleasure in the glory of God's natural creation. Handel had been writing opera in England since 1710; the reason behind the composition of these arias, his last works in German, and which were unpublished in his lifetime, remains unknown.

Harmonia Mundi's Rebel: Elements – Vivaldi: Four Seasons combines two of the Baroque's biggest instrumental barnburners as performed by one of the top period instrument groups in Europe, Akademie für Alte Musik, Berlin, under the leadership of concertmasters Clemens-Maria Nuszbaumer and Georg Kallweit and featuring their star attraction, violinist Midori Seiler. Like Vivaldi's often derided as over-familiar Four Seasons, Jean-Féry Rebel's 1737 ballet Les Éléments does not want for good recordings, but it is nowhere near as famous as the Vivaldi; this is the first time the two have been combined on a recording, and these pieces are quite compatible given their shared, programmatic purposes. Inasmuch as the Akademie für Alte Musik, Berlin is concerned, these recordings reflect a staged performance of the two works as prepared for a festival in Italy in the fall of 2009 in collaboration with choreographer Juan Kruz Diaz de Garaio Esnaola.
–Dave Lewis

Gottfried August Homilius, now considered the greatest cantor of Dresden's Kreuzchor, was, for a while a student of Johann Sebastian Bach. A composer of music for the church, and a great organist, he was described, in 1790, as 'one of the greatest and worthiest organists alive.'
While Homilius's name is found on only one score for this passion, stylistic criteria make it almost certain that he wrote this music. This St. Matthew Passion closely resembles Bach's passions - it contains choral movements, recitatives and arias with orchestral accompaniment, and tells the story of the Passion in the same way as was done in churches all over Germany in the 18th century. However, Homilius uses many more short sections with recitative (a total of 89 pieces altogether - most less than one minute long), but his arias are generally much longer than those in Bach's passions and cantatas.