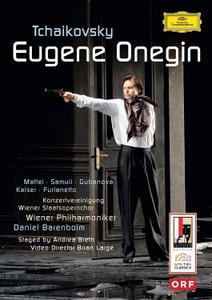 Recorded at the 2007 Salzburg Festival, this production of Tchaikovsky's Eugene Onegin features an excellent, young cast and the Vienna Philharmonic conducted by maestro Daniel Barenboim. Director Andrea Breth has created an intimate production that mines the depths of expression and charisma of her singer-actors and integrates silent secondary episodes and miniature dramas to heighten the intensity of the story. The title role–a tour de force for any baritone–is taken by Peter Mattei, who starred as Figaro in the Metropolitan Opera's HD Live Broadcast of Il Barbiere di Siviglia. He is joined by dazzling young Russian soprano Anna Samuil, a protégée of Daniel Barenboim who has been acclaimed as a vibrant new presence on the opera stage. The opera includes a wonderful performance from the young tenor, Joseph Kaiser, recently acclaimed for perfomances at The Met opposite Anna Netrebko in Roméo et Juliette, as well as a solid contribution from bass Ferruccio Furlanetto.