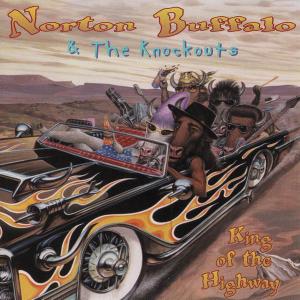 King of the Highway is the first solo release from blues harp wailer Norton Buffalo and his band, the Knockouts, since the release of 1978's Desert Horizon. Norton Buffalo is an in-demand studio musician who has played on numerous sessions in all genres of music, highlighted by his involvement with blues slide guitarist Roy Rogers. The majority of King of the Highway is enjoyable (while occasionally predictable) straight-ahead modern blues mixed at times with an occasional hint of New Orleans zydeco rhythm courtesy of Buffalo's unamplificated harmonica. One of the main strengths of this 13 track Blind Pig date is the loose feeling brought by friends including Elvin Bishop, Steve Miller (Buffalo has been a member of his band for 25 years), and Merl Saunders, gathering together simply to jam.