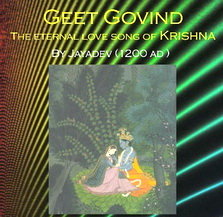 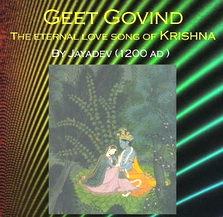 The first English translation of the Gita Govinda was published by Sir William Jones in 1792, where Kalinga (ancient Orissa) is referred to as the origin of the text. Since then, the Gita Govinda has been translated to many languages throughout the world, and is considered to be among the finest examples of Sanskrit poetry.

Geet Govind introduced to the western world a devotional and mystic aspect of Hinduism. It also created a vibrant following of Krishna and Radha in Hindu culture.

Today there is no field of culture that has not been influenced by Geet Govind. Art, music, dance and poetry have brought to life Jayadeva’s immortal work. Entire sects of Hinduism are today based on the worship of Krishna and Radha as the supreme deities and they all can be traced back in some way or the other to Geet Govind.

The Origin of Geet Govind
Geet Govind is an epic poem, written in Sanskrit by Jayadeva in the eleventh century. It is said that Jayadeva was a poet in the court of King Lakshmansen of Bengal. He was an ardent devotee of Krishna and he wrote the verses of the Geet Govind as an expression of his devotion. At the temple of Jagannath in Puri he would sing the songs from the epic poem and his wife Padmavati would dance to them. Soon Geet Govind spread through the length and breadth of India. However Puri remained the center for Geet Govind. A special community of dancers known as the Maharis used to enact verses from the poem. A fifteenth century inscription in the temple prescribes the inclusion of dances from the Geet Govind as a part of the nightly rituals of the temple.

Divine Love
Human emotions have been so intensely portrayed by Jayadeva that it is easy to forget that the protagonists of the epic are divine. But it is amply evident that Krishna and Radha are divine and that Jayadeva considered them to be so and worshipped them devoutly. What Jayadeva describes is the Divine Lila of Krishna and Radha during their avatar in the land of Braj. In fact many Hindu philosophers consider this Lila to be an allegory for the human soul’s desire to merge with the divine.

There are several evidences of the divine nature of Jayadeva’s work. It begins with an invocation to Krishna as the Supreme deity. Throughout the work Krishna is referred to with his several divine epithets and his divine acts, most commonly that of slaying various demons. Chaitanya Mahaprabhu, one of the most revered Hindu saints was immensely influenced by Geet Govinda