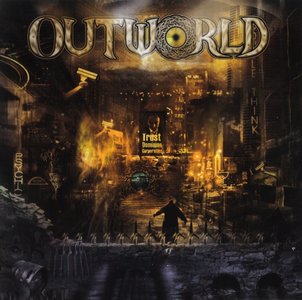 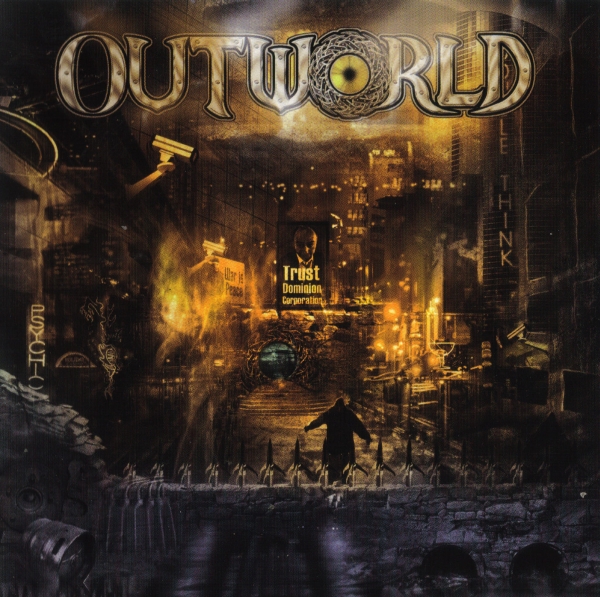 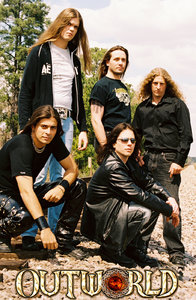 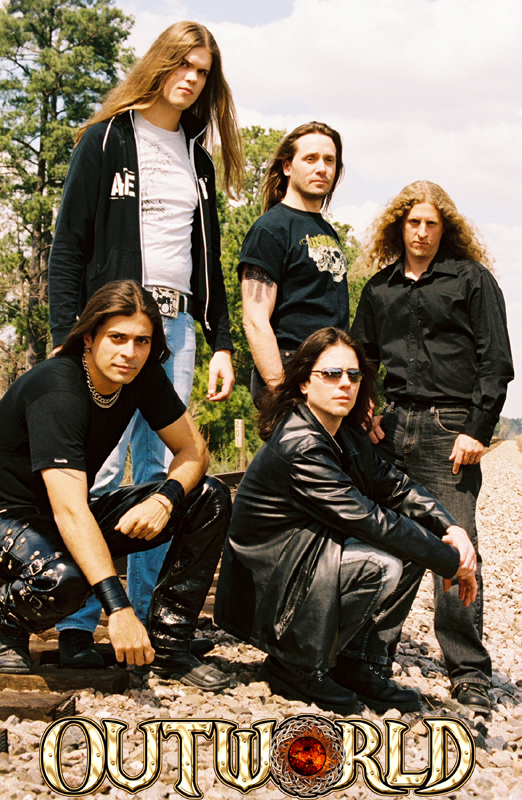 Cooley and Williamson hit it off and decided to form a band,drawing influences from favorites of theirs such as DREAM THEATER,SYMPHONY X,PANTERA and IRON MAIDEN.They recruited vocalist Kelly Carpenter,and along with an unnamed bassist and drummer recorded a 4 song demo.The demo gained OUTWORLD much needed attention and the band were signed to Replica Records.Bassist Shawn Kascak joined the band and the core of OUTWORLD were formed.

OUTWORLD began recording their debut and because of Cooley's notoriety as an up-and-coming guitar prodigy the band played some key gigs,such as ProgPower VI pre-party in Atlanta, Georgia and a NAMM-affiliated show in Austin,Texas.

The line-up was still unstable,OUTWORLD went through three drummers in the span of one year and vocalist Carpenter became increasingly involved with other work,such as providing the vocals for BEYOND TWILIGHT'S album "Section X".

OUTWORLD finished recording their debut cd in 2005.They then began an exhaustive search for a permanent drummer,and found Matt McKenna.

OUWORLD released their self-titled debut in 2006 and are currently working on their next album.

OUWORLD'S music features complex arrangements and unparalleled musicianship,drawing raves from DREAM THEATER'S John Petrucci…“The thing that stands out the most, however, is the maturity of the song structures. Really cool riffs, melodic hooks and a great mix have made this one of my favorite releases of the year.” 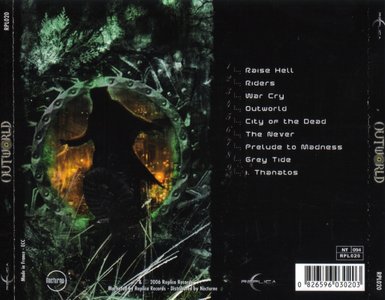 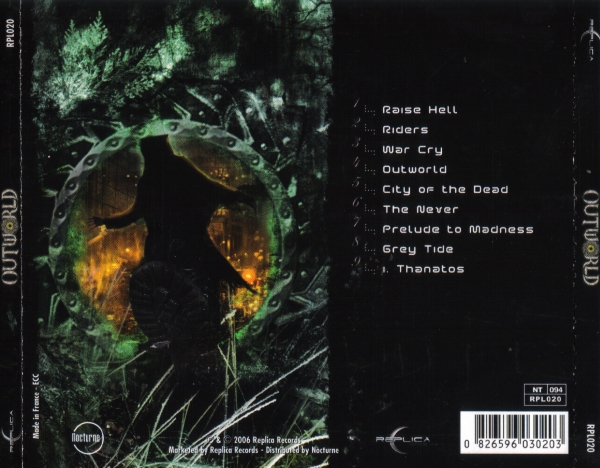 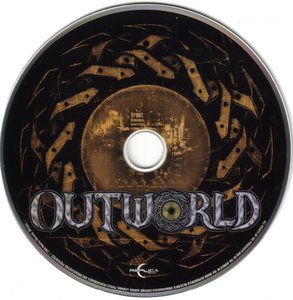 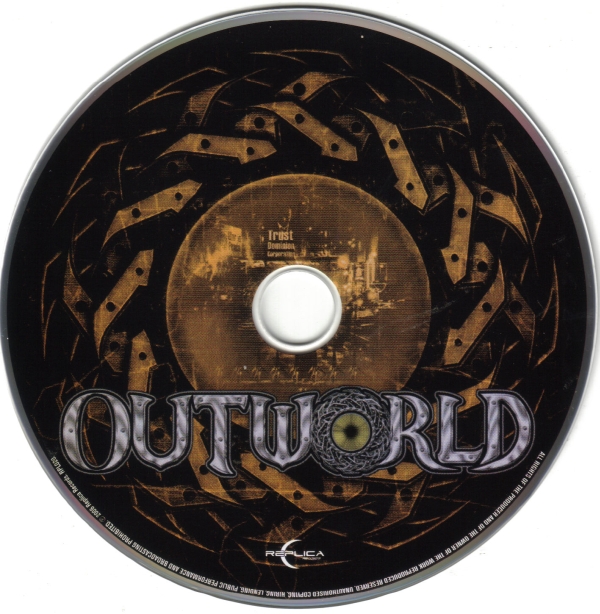 In this day and age, progressive metal seems to be a label that many try to avoid. And honestly, who can blame one from wanting to steer clear. The stereotypes surrounding the troublesome genre paint it as that of a pretentious, over the top style of music where guitar noodling; pointlessly long songs; and well, sleep inducing boredom are all mixed into 60-70 minutes of…unpleasantness. See Dream Theater for a better understanding. But luckily there are always exceptions to said generalizations. Two bands which quickly come to mind are Symphony X and Into Eternity. But does the metal underground have any fresh blood to offer up? Well as a matter of fact…yes, it does. Enter Outworld, progressive metal band extraordinaire. Formed in 1997 the band has been garnering more and more support in the metal underground as of late. And finally, the Houston, Texas based quintet has released its debut album, albeit nine years after the band's inception. Released on November 13, Outworld's self-titled release is quite the progressive metal extravaganza.

Outworld's style of prog metal is a rather likeable combination. Right from the beginning of the album, the band forces listeners into submission with aggressive riff after aggressive riff after aggressive riff. Surely, fans of this type of guitar work should find themselves right at home with Outworld, as this tactic is employed through the entirety of the hour long recording. The opening track, Raise Hell, displays this relentless intensity quite well, as you would expect from a song with a name such as that. No, it isn't a Follow the Reaper, Painkiller, or Symbolic in terms of heaviness and aggression, but it definitely holds its own in this respect. Like many a progressive band, Outworld does feature extremely technical sections. Be it through the riffs, solos, bridges, or other interludes, each musician commands their respective instrument with skill and precision. Of the four band members who play an instrument, guitarist Rusty Cooley would definitely be the must impressive. Each track showcases him performing a few blindingly fast, technical solos which, although sometimes overwhelming at first, proves to be quite entertaining and a force to be reckoned with on the axe. Those who are not fans of shred guitar most likely will not find pleasure in listening to the young guitarist's neo-classical pieces, as he does spend a fair bit of time wanking all over his guitar, yet for the most part his performances are tasteful and likeable. The minute and a half long track, A Preludes to Madness, is an excellent example of the man's skill. Fans of shred guitar should check that track out.

After Cooley, by far the most impressive member is Outworld's former frontman, Kelly Carpenter. His voice is quite difficult to describe. Try to imagine a combination of a more aggressive James Labrie (Dream Theater), a less sombre Warrel Dane (Nevermore) and Urban Breed (Tad Morose), and you'll have Kelly. His singing is actually a very powerful tool which Outworld makes perfect use of. Need an example? Check out the album's third track, War Cry. The 6 minute epic features both softer, more contained singing from Kelly, as well as a shockingly impressive shriek which definitely helps up the aforementioned aggression which drives the album. It is in moments such as theses where his influences shine through, yet Carpenter still manages to retain a sense of originality and uniqueness. It's too bad Kelly and Outworld parted ways, as he can sing with the best of them and should have a bright future in metal.

There have been a few excellent debut metal albums in 2006. So far, my two favourite, Cellador's Enter Deception and Outworld's Outworld have been, for the most part, very well received by the metal community. The later is an excellent offering from an up and coming progressive metal band, and those who enjoy this type of music should readily enjoy it. Fusing extreme virtuoso; muscular, high speed riffs; solid song writing; several epic tracks; and excellent, high flying vocals; Outworld's self titled debut is definitely an impressive offering from the Texas metallers. This band is one that the metal community should look out for in the future, especially fans of bands such as Symphony X, Tad Morose, and Dream Theater.
Mike Stagno (SputnikMusic)