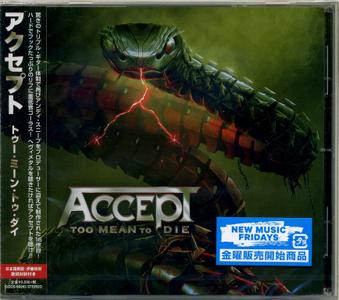 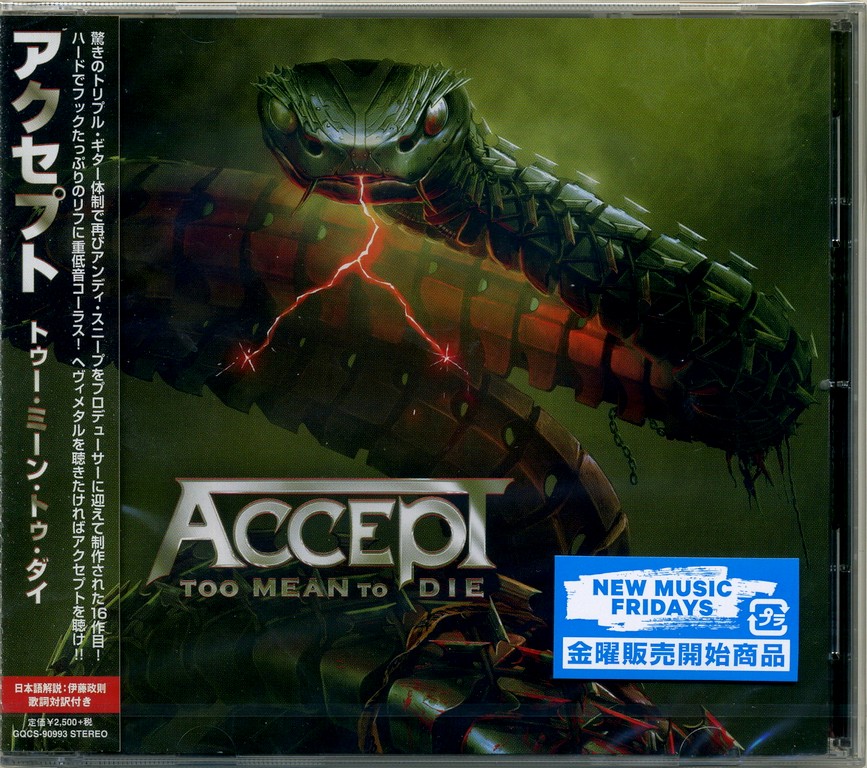 Too Mean to Die is the sixteenth studio album by German heavy metal band Accept, released on 29 January 2021. It is the first Accept album to feature Martin Motnik, who replaced original bassist Peter Baltes in 2019, and rhythm guitarist Philip Shouse, who joined the band that same year.

Speaking of heavy metal kingpins, when ACCEPT first launched at the end of the 70s, the metal genre didn’t even exist - at first the band could only be labelled with the (quality) seal “crazy loud and crazy wild”. Today we know that this was (and is) metal par excellence. And we also know that ACCEPT opened the door to thrash metal, inspiring giants such as Metallica. Guitarist Kirk Hammett recently stated in the German magazine “Gitarre & Bass”: “Wolf Hoffmann has a huge influence on me.“

ACCEPT, who once had their origins in the city of Solingen, a city of sound, have been a worldwide music phenomenon for more than 40 years. They still impress with razor-sharp guitar licks and a steel-hard sound. The band created all-time metal classics like “Balls To The Wall”, “Metal Heart” and many more. Countless world tours and headline slots at the biggest, cutting-edge festivals cemented the band’s reputation as one of the best, hottest and loudest live acts ever. In addition, the band has sold millions of records, has achieved gold status in the USA, top 10 chart positions worldwide and a number 1 album (Germany, Finland) for “Blind Rage” (2014).

Now with “Too Mean To Die” their 16th studio album is in the starting blocks - it is the fifth album that US vocalist and front man Mark Tornillo has put his incomparable vocal stamp on.
Recorded in the world music capital of Nashville (USA), ACCEPT’s music was once again produced by British master producer Andy Sneap, who is responsible for the mix. Sneap, who works for Judas Priest and Megadeth among others, has also been responsible for all ACCEPT productions since 2010.

ACCEPT mastermind Wolf Hoffmann stated: “From the very beginning it was clear to us that we would start working with Andy again.“ No sooner said than done - the band and Mr. Sneap met in March of this year for their first studio recordings in Nashville. What they couldn’t guess at the time was that a certain virus would suddenly turn the world upside down.

Bitter consequences: After only two weeks in the studio - and facing the threat of a lockdown - the band and Mr. Sneap decided to interrupt the recording session abruptly. Hoffmann: “The risk that none of us would be able to return home at that time was simply too great.“

But ACCEPT have overcome many different challenges throughout their four decade long career - so the band gathered again in Nashville in July to continue working on the album. Only one person was missing: Andy Sneap. Hoffmann: “Andy couldn’t come from England, so we had to find an alternative way, which went like this: Andy was sitting at his PC in England, and we recorded the songs and communicated with him online. He produced from a distance, so to speak. Amazingly, it worked better than we thought it would… Fortunately we had already recorded a large part of the songs before the break, so the experiment with Andy Sneap working as remote producer worked well."

Special circumstances often lead to very special albums. This is certainly true for “Too Mean To Die”, which of course alludes to the Corona period, although in a different way than one might assume. Hoffmann says: “Its to be expected that many musicians will address the Corona situation in their songs. There will certainly be slogans for cohesion, through which positive vibes should be spread, which is also good. But we have decided to not let ourselves be influenced by it. The fans will get a hard, direct and uncompromising metal album, but of course accompanied with a wink: We are too mean to die! Weeds do not go away! ACCEPT do not let themselves get down!”

Wolf isn’t wrong - the title track is a classic Accept cracker: dynamic and unwavering, turned up to eleven! 'Zombie Apocalypse', also relentless and hard, strikes the same note in the band’s signature style. The first single - which will be released on October 2nd 2020 together with a remarkable video - is different. Titled ‘The Undertaker’, its a terrific midtempo number with great vocals and a built-in character that chugs along – certain to deliver some mermorable live moments! According to Wolf Hoffmann its one of the most catchy, pleasing pieces of the album.

New to the band, and thus to be heard for the first time on an ACCEPT album, is Philip Shouse (Gene Simmons Band, among others). The US guitarist fights hot duels with Hoffmann, while Uwe Lulis makes the guitar trio perfect and provides the right rhythm. “Phil was part of our orchestra project and was also completely convincing live. We recognised his great talent immediately and simply didn’t let him go,” explains Hoffmann.

Just how varied the ACCEPT guitar trio performs on the new album is proven by one of the secret highlights: ‘The Best Is Yet To Come’ – a beguiling ballad in which Mark Tornillo is at his best. The metal world knows that Mark can scream like no other, but here it shows once again that the frontman can also sing magnificently. “Mark sang this, for us rather unusual song stunningly well. The fantastic thing about Mark is that he not only masters the typical metal screams, but can also sing melodically and beautifully. He proves this impressively in this song”, chief guitarist Hoffmann raves.

A singer with whom the characteristic string virtuoso imposed another “seal of approval” right at the beginning of their 2010 collaboration with the milestone “Blood Of The Nations”, a seal of quality that is still going strong today. On “Too Mean To Die” the congenial duo Hoffmann and Tornillo present the highlight of their work so far.

In addition, ACCEPT have strengthened their team even further with newcomers Martin Motnik (bass) and Philip Shouse (guitar), thus forming an unbeatable team together with “Drum God” Christopher Williams and “Rhythm Master” Uwe Lulis. There’s no doubt that with “Too Mean To Die” Accept are once again playing at the top of the Champions League of the genre. Wolf Hoffmann & Co. present the (music) world eleven masterpieces at the beginning of 2021 - eleven songs for eternity!

All thanks go to HaRD