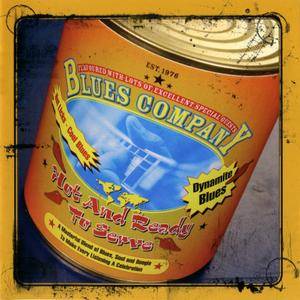 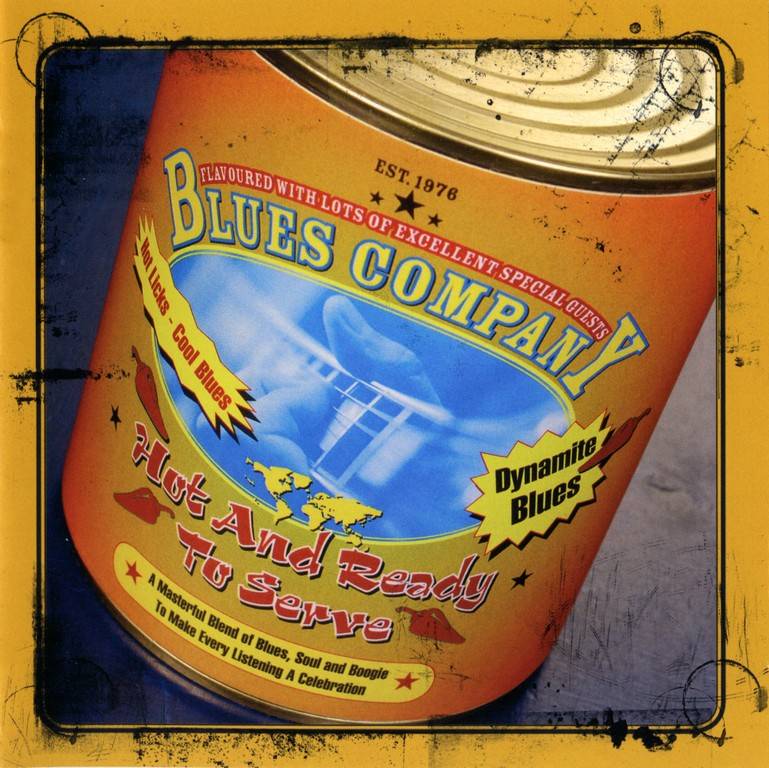 This band is hot. Very, very hot. And those aren't just empty words. After all, the Blues Company from Osnabrück, Germany is neither a hodgepodge of rank beginners nor - to borrow business lingo - a group of new business starters. Rather, they are a team of artists who have made their mark, musicians with experience and know-how aplenty. The musicians at work here have long since ensured that the name of their “company” is a recognised “seal of approval”. In a nutshell, “Blues Company” stands for German's longest-running and most successful blues band. And with each new recording, with each concert, these pros underscore that their passionate love affair with the blues is burning brightly as ever.

Has their playing become routine? Not a chance. Quite the contrary, as can be seen in the fruitful interplay between the performers and their enraptured public. This in turn energises the band, whose fans feast on a free-spirited performance of the music Blues Company lives and breathes. Since the '60s, the blues have inspired practically every generation of enthusiastic young, white musicians. Blues Company itself hasn't been around quite that long. The band started up its blues crusade on 20th May 1976. That was the day they first climbed on stage to fire up the audience into a twelve-bar frenzy. After countless other live missions, they proudly celebrated their first 30 years in the spring of 2006.

Initially, Blues Company concerts were not just a mix of fun and hard work. They were pioneering events. Because until Blues Company came to be, blues in Germany - performed by professional bands - quite simply didn't exist. What did exist were tours by American blues greats, who often enjoyed higher esteem in Europe than in their homeland. The Blues Company musicians backed up many of these bluesmen at their concerts in Germany. Thus they not only got to know the old masters, they garnered the admiration of countless blues freaks. Since then, many a basement musician who's strapped on a guitar or settled down on a drum stool to indulge in the twelve-bar sound can thank the Blues Company for leading the way (far off over the German border, a young, very talented Blues guitarist from Hungary admitted that he was significantly influenced by this band, after hearing one of their concerts).

The Company itself has demonstrated tremendous staying power - and Todor “Toscho” Todorovic, the band's co-founder as well as singer, guitarist, composer and sound freak makes sure of this. The bluesman was born in 1951 in Lingen, in the Emsland region of northern Germany. His parents, who were born in Yugoslavia and who had fled to West Germany after the Second World War, gave their son a variety of opportunities to expand his musical horizons. And what Toscho learned from them and from grand old men of the blues including B.B. King and Muddy Waters would one day become the lifeblood of “his” Blues Company. Toscho not only plays the blues, he lives and breathes them. Blues without compassion would be unthinkable. Thus for years the band's leader has organised benefit events both large and small in his adopted country. For his commitment to social concerns, the city of Osnabrück awarded him the Public Service Medal in 1993.

Because the blues are performed live, Toscho has worked unceasingly on his image as an entertainer. It is pure delight to watch his facial reactions to a catchy refrain, to see how he electrifies the crowd with a breakneck guitar solo or entrances his listeners with a lush melodic figure, how he wakes emotions with his distinctive, dark voice. And with experienced band members at his side. The current line-up - in effect the core band - includes second guitarist Mike Titre (member of the band since 1980), Olli Gee on bass and organ since 1993 and Florian Schaube - band member since 2000 - on drums. 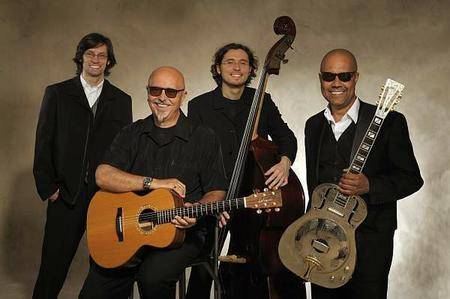 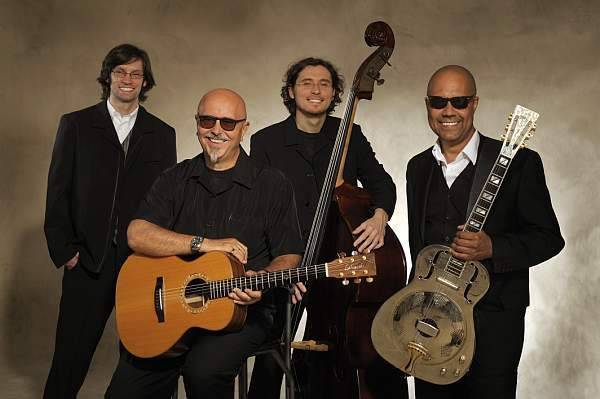 The band has chalked up an impressive number of performances throughout Europe over the past 25-plus years: 3,000 to date. And even in the US clubs, the band is now viewed as an insider's tip, with the band's market value on the rise.
And not only that: the fact that Germany's most tireless, ever-present and longest-lived blues band is also its most commercially successful is due to the superb quality of its studio recordings. Quite a few of its 20-odd albums are amongst the best-selling German blues recordings ever, including “Damn! Let's Jam” (1991), “Vintage” (1995), the Best Of “Blues, Ballads and Assorted Love Songs” (1997), “Invitation To The Blues” (2000) as well as “From Daybreak To Heartbreak” (2003), in collaboration with Scott Billington, the renowned US producer.

With the CDs they purchase, their fans also honour Blues Company's non-purist approach to their music. The band thrives on change. “Blues is always changing - that's what keeps it alive” is their creed. And in this way they have cultivated an innovative, open-minded, free association with the Blues genre: Whether rock, soul or the New Orleans grove, it goes without saying that these are all part of their musical repertoire, and they love experimenting with fresh sounds. In 1999, Toscho brought in the “Fabulous BC Horns” - Uwe Nolopp on trumpet and tenor sax player and arranger Robert Kretzschmar. And with the “Triple X Horns” (= BC Horns plus four other wind players), a jazzy big band sound enters the picture. At the time of their 30th anniversary they performed together with the NDR Big Band (North German Broadcasting), who, as is well known, have always been open-minded towards new things.

Their 2005 combo coup was also a real surprise. For “The Quiet Side Of Blues Company”, Todorovic and Titre gave their beloved Fender guitars a breather, and so, leaving their electric guitars behind them, the quartet went acoustic. In lovingly “unplugged” arrangements, audiences were presented with oldies from Robert Johnson to Muddy Waters, paired with the odd Blues Company hit.

After this unabashedly relaxed return to the roots, the origins of the blues, in their new album “Hot and Ready to Serve”, Toscho & Co. once again show off the talents for which they are best known and loved: they serve up powerful, modern, guitar-based blues. Just as the cover unmistakably suggests, the music is a "gumbo", a dish directly from New Orleans, very nourishing and sharply flavoured, with every possible ingredient that grows and flourishes in the enormous garden of blues. Driving rhythm and blues from the fifties (“Till The Lights Go Out”) and boogaloo (“My Guitar And Me”) stand side by side with funny music (“Soon Or Later”), profound ballads (“Dark Day”), a scat number by the Boss (“Shake It Don't Break It”) and Toscho's tribute to the great Freddie King with “Hideaway/Peter Gun Theme”.

Such complex, versatile music, such superior lyrics. Once again, Toscho does not limit himself to laments for a lost love or to describing the wonderful feeling that a blues musician gets when up there on the stage in their element. He does do this. But he does more, he sings about street urchins (“Kids”) and homeless people (“Soon Or Later”) in the First World country, Germany, or he reflects on the fall of the Berlin Wall and the upheavals in Eastern Europe which followed this (“The People”). In “Plastic People” (with Mike Titres in his first singing appearance in a Blues Company record) the song again talks of the plastic world of today, in which people are becoming ever more artistic.

Only “Hollywood” remains. In this song Toscho talks of a point at which he feels himself to be at “the pinnacle of his musical career”. In the autumn of 2006, the many time award-winning American film producer and script writer, Ian Gurvitz knocked at the door of the Blues Company and their record company. He wanted to use the song “Blue And Lonesome” from the album “Keepin' The Blues Alive” as the theme song for his film “L.A. Blues”. It was the first time that Hollywood has ever imported a blues song from Germany. Lately this makes particular sense as the Blues Company is an international player with an internationally successful product. 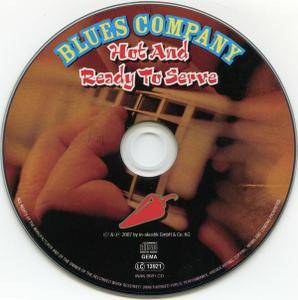 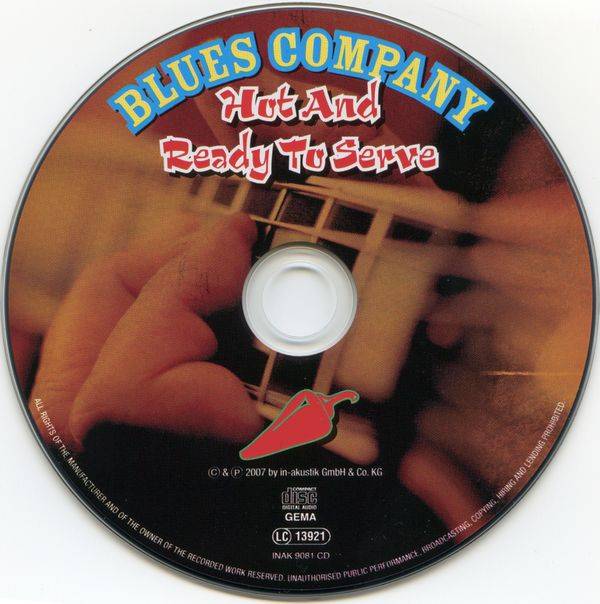 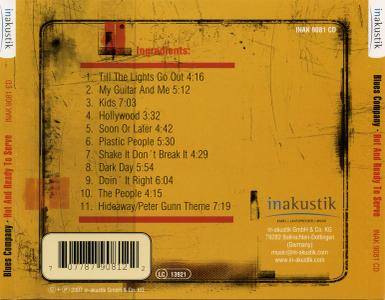 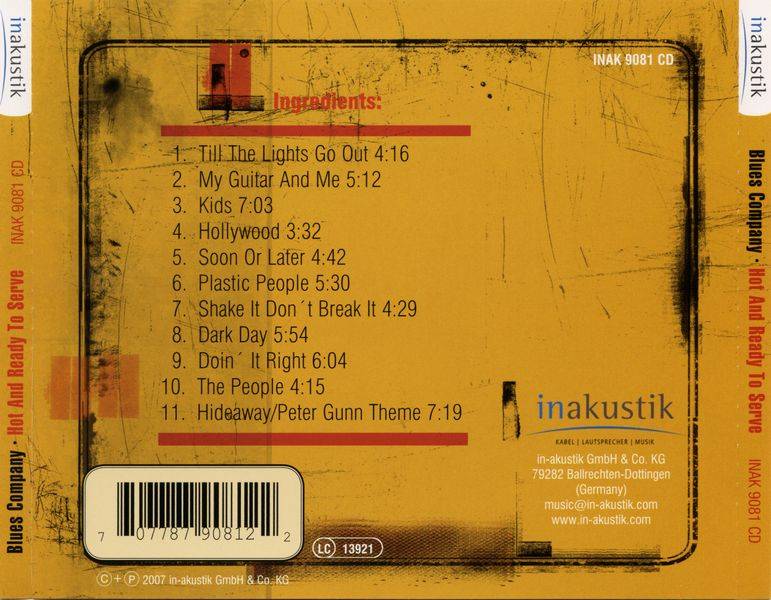 All thanks go to Гордый