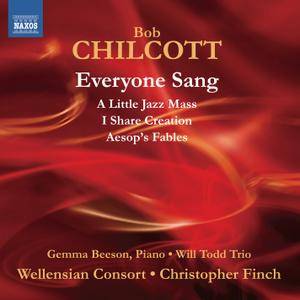 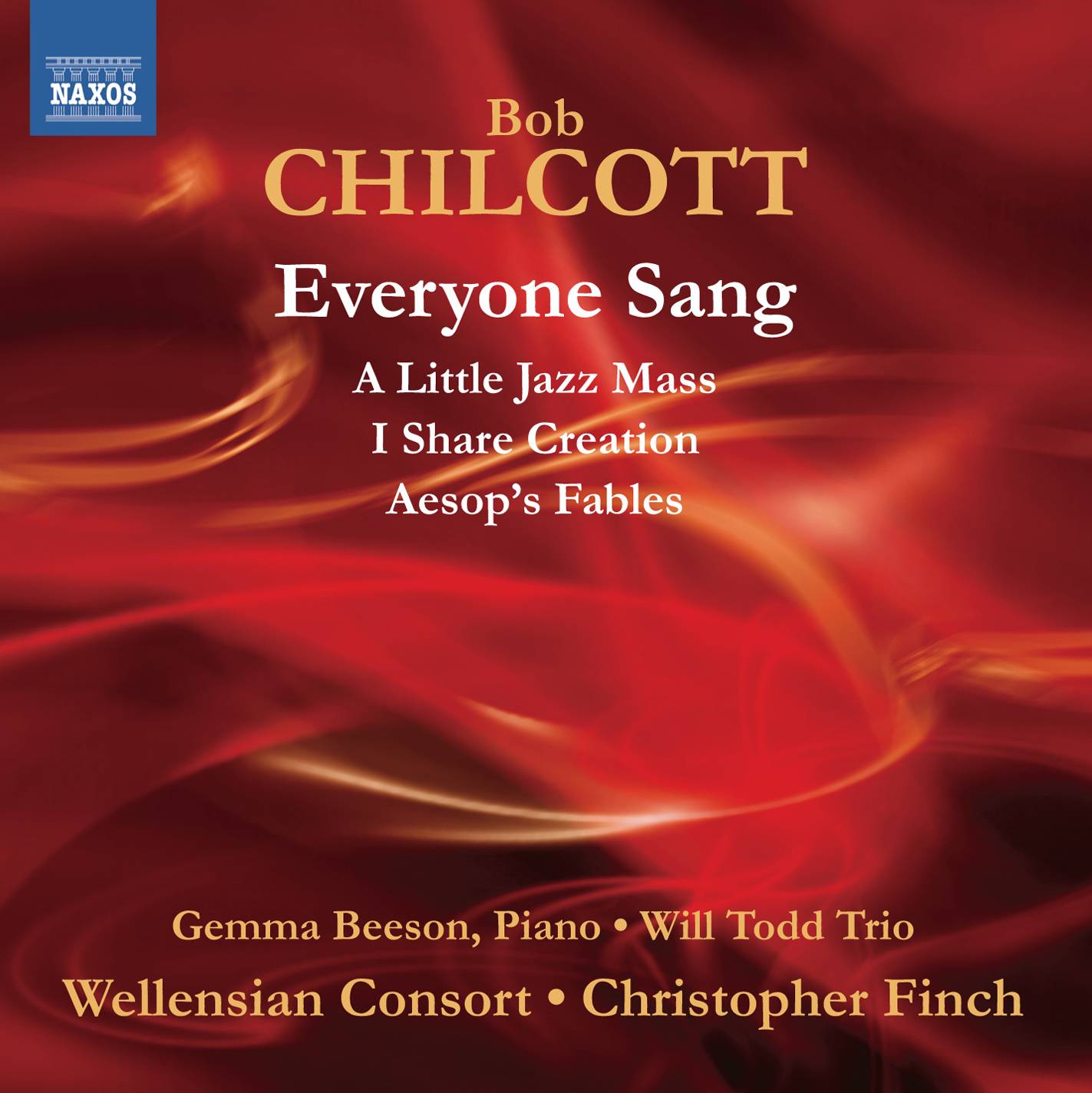 Described by The Observer as “a contemporary hero of British Choral Music”, Bob Chilcott is one of today’s most widely performed composers of choral music. This programme includes première recordings of favourites such as A Little Jazz Mass, songs and carols on a variety of texts, and the wit, wisdom and drama of Aesop’s Fables in which Chilcott makes musical references to Brahms and Schubert. Winner of the coveted BBC Choir of the Year award in 2010, the Wellensian Consort is one of the United Kingdom’s leading chamber choirs.

As an ex-singer himself (in both King’s College Choir and the King’s Singers), Bob Chilcott knows what works vocally. You can hear this particularly in A Little Jazz Mass, where he perfectly fits the words of the Latin text to the whippy, upbeat syncopations of the Kyrie and Gloria. The Agnus Dei is, at four minutes, the longest movement. Here a bluesy flavour is added, befitting the subject matter. The work could have easily been kitschily condescending but actually works excellently.

So, too, do Aesop’s Fables, five settings with piano accompaniment. The variations of phrase length and dynamics in ‘The Hare and the Tortoise’ cleverly mimic events in the story of how the two raced each other. It sounds fun to sing and is certainly fun to listen to. Chilcott’s more reflective side surfaces in the broody ‘The Fox and the Grapes’, and in the concluding ‘The Goose and the Swan’, where he pays homage to Schubert by referencing his song Du bist die Ruh in the shaping of the melody. All the shorter pieces are immediately attractive, and performed winningly.

The Wellensian Consort was formed in 2009 by Christopher Finch as part of the celebrations to mark the 1100th anniversary of Wells Cathedral School. Within a year the group had gone on to win the BBC Choir of the Year competition in 2010: some start. Since then they’ve become frequent broadcasters and have appeared at some of the leading venues and festivals in the UK.

For their debut CD they’ve chosen music by one of Britain’s most prominent and accessible choral composers. In fact, Bob Chilcott is developing something of a link with the musicians of Wells. The Cathedral choir made a very fine CD of his music a couple of years ago, including the eloquent Requiem (review) and earlier this year the choir gave the first performance of Chilcott’s St. John Passion, which was written for them (review).

For anyone unfamiliar with Bob Chilcott’s music the nearest comparison I can offer is the music of John Rutter. Like Rutter, Chilcott seems to have the knack of writing vocal music that is consistently attractive, not least on account of its melodiousness. He also shares with Rutter an ability to produce well-crafted music which is satisfying to sing and well written for voices. Also he is well attuned to the texts he sets - though, unlike Rutter, I don’t believe he often, if ever, writes his own texts. There’s one other thing they have in common: just because the music is attractive on the surface no one should assume it’s easy; both composers know how to stretch their performers, albeit in a rewarding way. Chilcott writes in the booklet note that much of his output has been composed for amateur choirs and this ‘has presented me with the challenge of writing music that encourages people to sing, and this has always been one of the most important and motivating aspects of why I write choral music.’ Note the use of the word “encourage”: that speaks volumes for Bob Chilcott and his approach. His music has the popular touch but it is not populist. I’ve attended a couple of performances of pieces by him at which he’s been present and on both occasions I was struck by how many members of the audience - and how many performers - crowded round him afterwards, keen to have an appreciative word: he made time for them all.

Almost all the music on this CD was written for a specific choir, presumably to commissions, and several were composed for youth choirs though we hear them now in his subsequent versions for mixed choir. A Little Jazz Mass is one such. I took part in a concert a couple of years ago in which a school choir sang this piece and they did so with evident enjoyment. I was interested to see that the accompaniment here is provided by the Will Todd Trio for Todd himself has written a jazz Mass but his Mass in Blue was aimed squarely at adult choir and is on a more ambitious scale (review). Chilcott’s composition is catchy - especially in the outer sections of the Gloria - and the jazz idiom is well integrated into the music: it sounds natural and not grafted on. The Wellensian Consort’s performance is full of verve and I particularly admired their committed singing of the soulful Agnus Dei.

A Little Jazz Mass is one of several pieces receiving its first recording on this disc. Another is I Share Creation. Here Chilcott explores a theme to which he was to return on a larger scale in his 2012 Proms commission, The Angry Planet: environmental issues. Here he sets four texts from a variety of sources - a Chinese labouring song from 2500 BC; Native American; Aztec; Inuit - all in English translations. The result is an appealing work. The Chinese text is given a rousing setting. The middle two movements are sung attacca and the music for both is expressive and slow, while the concluding Inuit setting is extrovert and joyful.

There’s also an innovative approach to text selection in Aesop’s Fables, which also receives its debut recording here: I’m not aware that many composers have set any of these fables. Chilcott has chosen five and he says that in his settings he makes passing references to the music of other composers. I must confess that I found most of these well hiddenthough the debts to Brahms in the fourth song and to Schubert (Du bist die Ruh) in the final one are a little easier to spot. The settings are imaginative. I particularly liked the treatment of the fourth fable, ‘The North Wind and the Sun’, where, after the earlier, apposite wind-swept turbulence the music in the last verse opens up into a luminous radiance. The final fable, ‘The Goose and the Swan’, is set to pleasingly warm, homophonic music.

The shorter pieces are all attractive. My ear was caught particularly by Our Father. This is the closing section of a larger work, The Bread of Life, which was written for three German choirs. We hear The Lord’s Prayer, sung to slightly different words than usual, and then it’s repeated while a second choir, seemingly placed at a distance here, sing Christ’s words ‘I am the bread of Life’. This results in the fullest choral textures to be heard on this disc and, I’m inclined to think, the best music. I should like to hear the complete work.

Among the other works, Mid-winter turns out to be a setting of our old friend, Christina Rossetti’s In the Bleak Midwinter; originally for children’s choir but effective in this mixed voice version. It’s a nice alternative to the very familiar settings by other composers. The Lily and the Rose was also first written for children to sing. It features a most appealing, easily flowing melody which, I should think, would encourage children - and adults - to sing it. Everyone Sang, the piece which gives the album its title, is a setting of an inspiring, optimistic poem by Siegfried Sassoon. It put me in mind of some of the part songs of Gerald Finzi - even though the two composer’s styles are very different. I like the way Chilcott uses compound time to give the music a very positive feel and good forward momentum.

The first piece on the disc, The Isle is Full of Noises, is a most effective calling-card for the Wellensian Consort. Immediately we hear a bright, eager sound; the words are clear and the rhythms are crisp. The singers - six or seven sopranos, six altos, five tenors and six basses - blend very well and the quality of the sound is keen and pleasing. Happily, this sets the standard for everything else on the disc. The music is consistently attractive and so is the singing. This is an auspicious debut CD by the Wellensian Consort. I’m certain we shall hear more of Bob Chilcott’s music on disc but I hope very much that it won’t be long before we have another release from this talented choir. 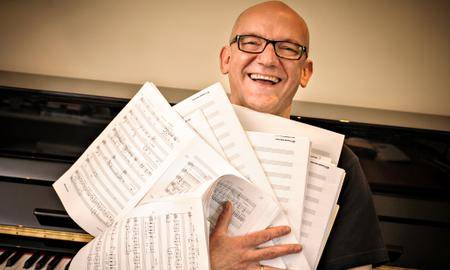 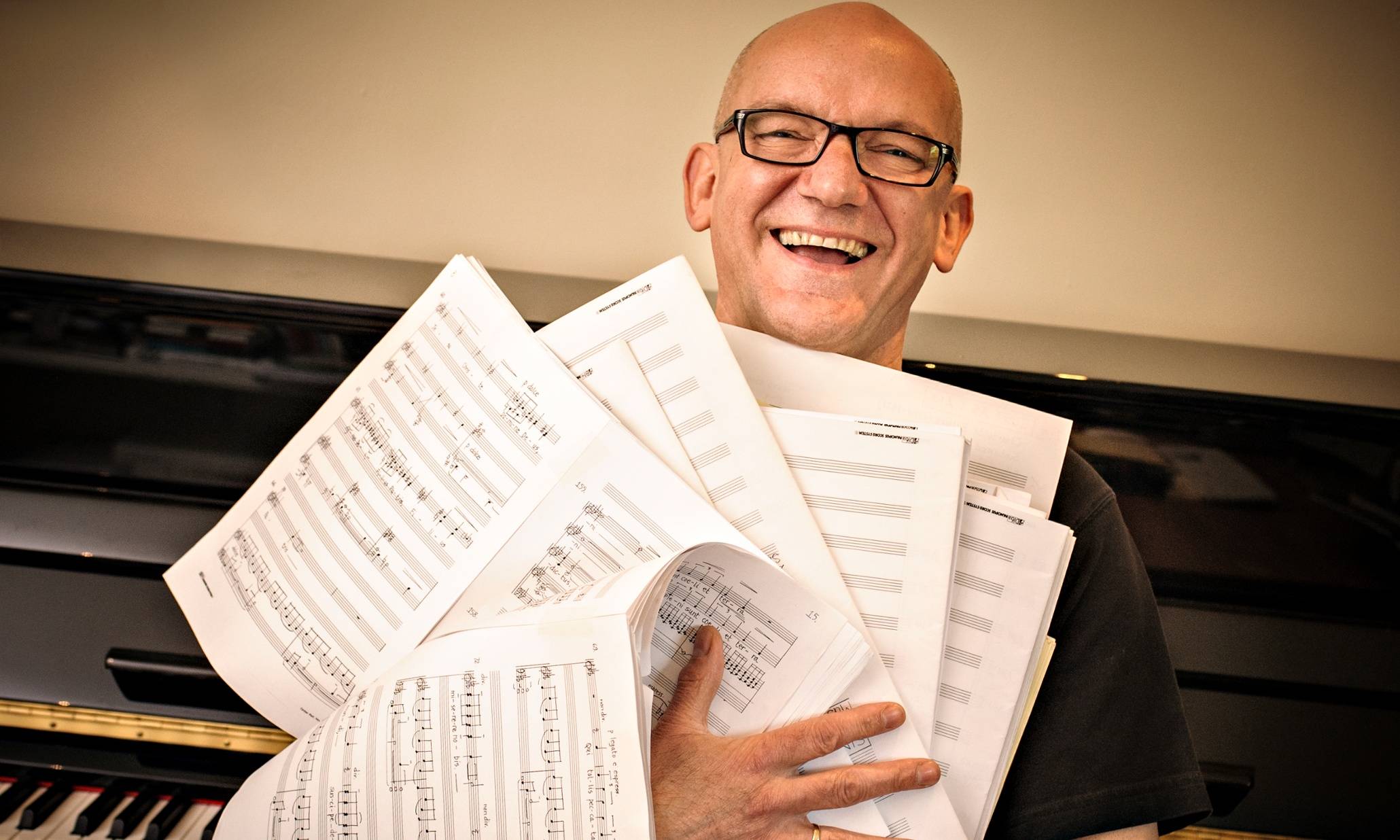 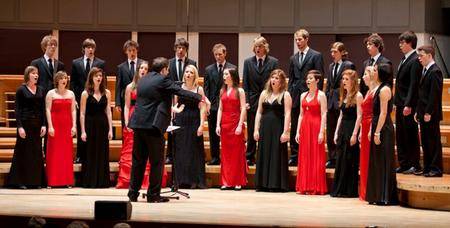 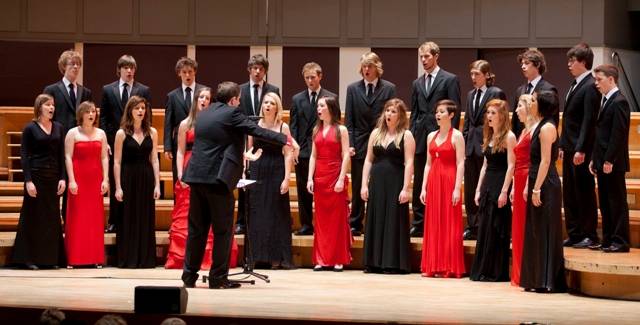 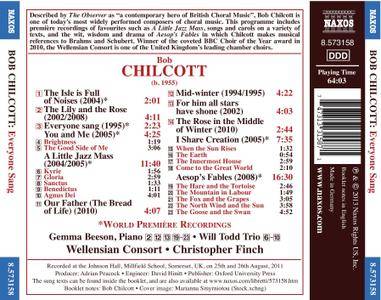 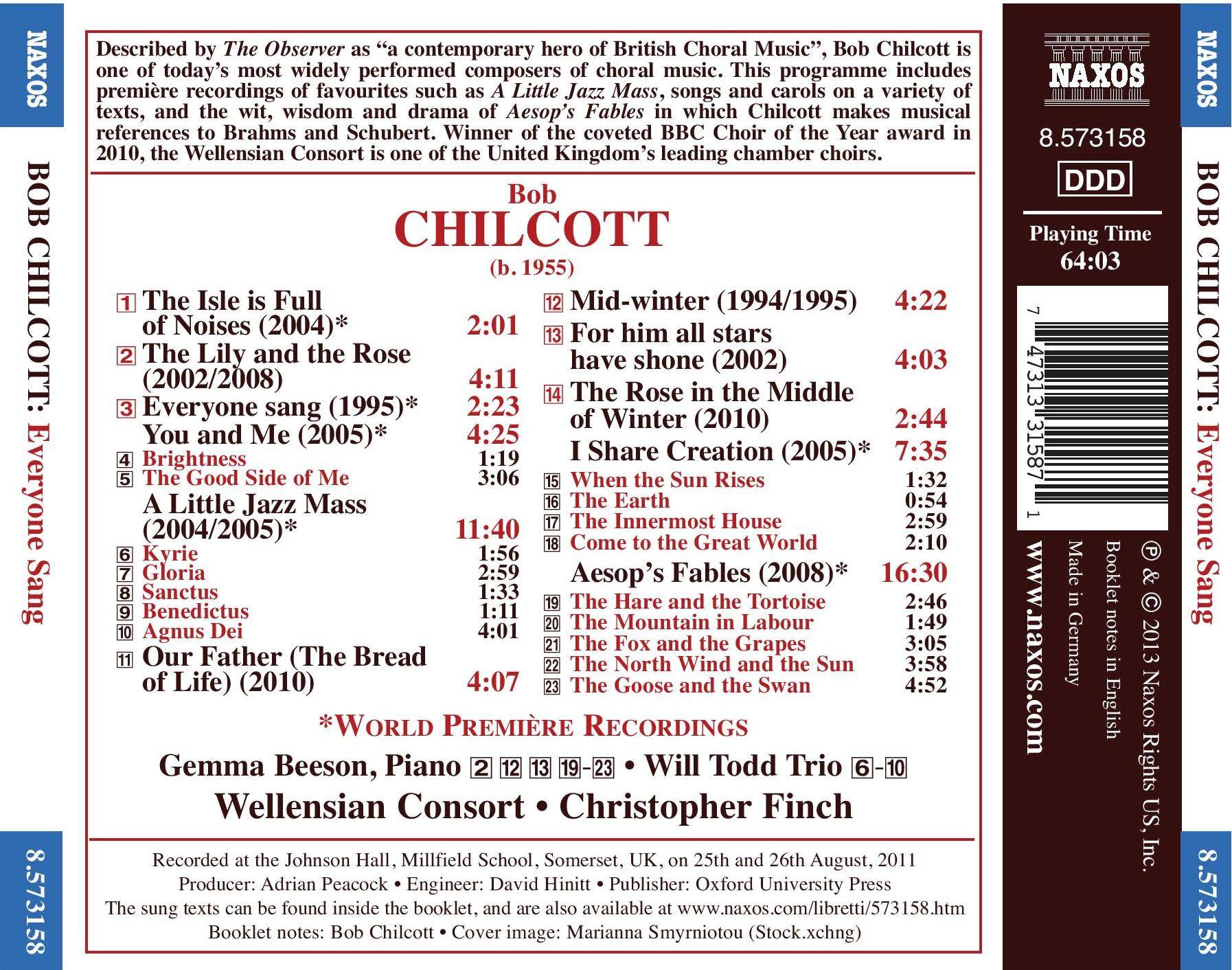