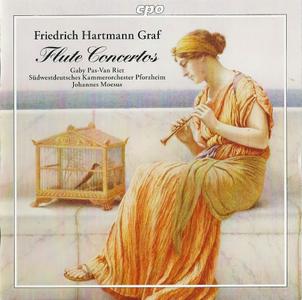 As a drummer for a Dutch infantry regiment, German born Friedrich Hartmann Graf (1727-1795) was captured during the War of the Austrian Succession. Upon his release, he took up the flute and became a traveling virtuoso. After a stint in The Hague with his older brother Christian Ernst (1723-1805), he accepted a position in Augsburg where he composed most of his 46 flute concertos.

All four on this disc follow the standard format of ‘fast-slow-fast’, and were probably composed in the 1770’s, the first 2 likely near the end of the decade. Written in C Major, the opening ‘Allegro’ of the first concerto is thoroughly engaging. After a stirring orchestral intro which includes a pair of horns to supplement the strings, the agile flute springs into action. Brief interludes in minor serve to create tension, which is resolved without any deep emotional probing. And by necessity, the solo passages require softer dynamics from the symphonic support for the virtuosic flourishes of the single wind to be heard.

Underlined by strings, the gentle ‘Adagio’ provides a platform for the delicate flute to soar. Exhibiting a particularly sweet tone, the soloist employs a subdued vibrato which leaves her sound somewhat flat, especially on the longer sustained notes. Hunting horns color the finale, a rousing ’Allegro’ that allows the flute to display a series of dazzling runs, a tour de force that brings the concerto to a triumphant close.

For the first concerto in G Major, paired oboes enhance the orchestral mix, although they are barely noticeable as they simply buttress the horns in the expansive first movement ‘Allegro’. Graf puts them to better use in the intimate ‘Andante grazioso’, where after the paired horns lay a gentle carpet of sound for the graceful flute, they serve as a plaintive woodwind contrast. This leisurely middle movement is one of the high points of the recording with its catchy melody, well-articulated orchestration, and the depth of feeling reached by the solo flute. Bursting with triplets and asymmetrical rhythmic patterns play off the rather square theme of the joyful romp that is the closing ‘Allegro’.

Penned several years earlier, the D Major Concerto returns to the symphonic lineup of the initial work, strings augmented by a pair of horns but no oboes. With marching pizzicato accompaniment and brief excursions into minor, the jaunty ‘Allegro’ features long melodic lines that provide the single wind ample opportunity to demonstrate exceptionally deft fingerwork on the rapid runs. Written in A Major, the aria like quality of the bright ‘Adagio’ is unmistakable, and the flute serves the fragile phrases well. Horns burst forth in the silence that follows, heralding the final section, a bright ‘Presto’ delivered with brisk urgency and a cheeky flute.

Probably written in the middle 1770’s, the second concerto in G Major starts with a galloping rhythm in orchestra in the sunny ‘Allegro’ that is soon appropriated by the single wind. Brimming with rolling triplets and flashing finger runs, the passages offer a bravura display for the soloist. In somber G Minor, an ethereal flute floats above the doleful lower strings. With touching pathos and emotional intensity, this mournful 2nd movement is a stunner. Sharply contrasting is the lively ‘Grazioso’ that immediately follows. Triple metered with an elusive flute darting among the vibrant orchestral sections, it forms a fitting end to this fine disc.

Clean and crisp, the 2011 recording from CPO is first rate. Also splendid is Johannes Moesus’ direction of the Southwest German Chamber Orchestra of Pforzheim with its skillful alternation of subtly nuanced backing of the single wind instrument with broadly sweeping orchestral sections. Belgium born Gaby Pas-Van Riet on solo flute is fine, demonstrating an easy affinity for the challenging faster passages. One of three CDs that have been recorded of Graf’s works and the only one to offer his flute concertos, it is an excellent starting point to discover this little known composer. 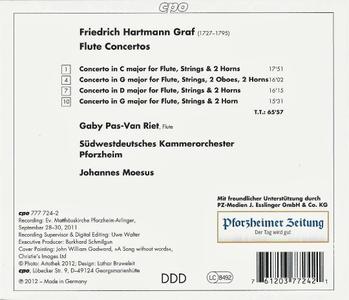 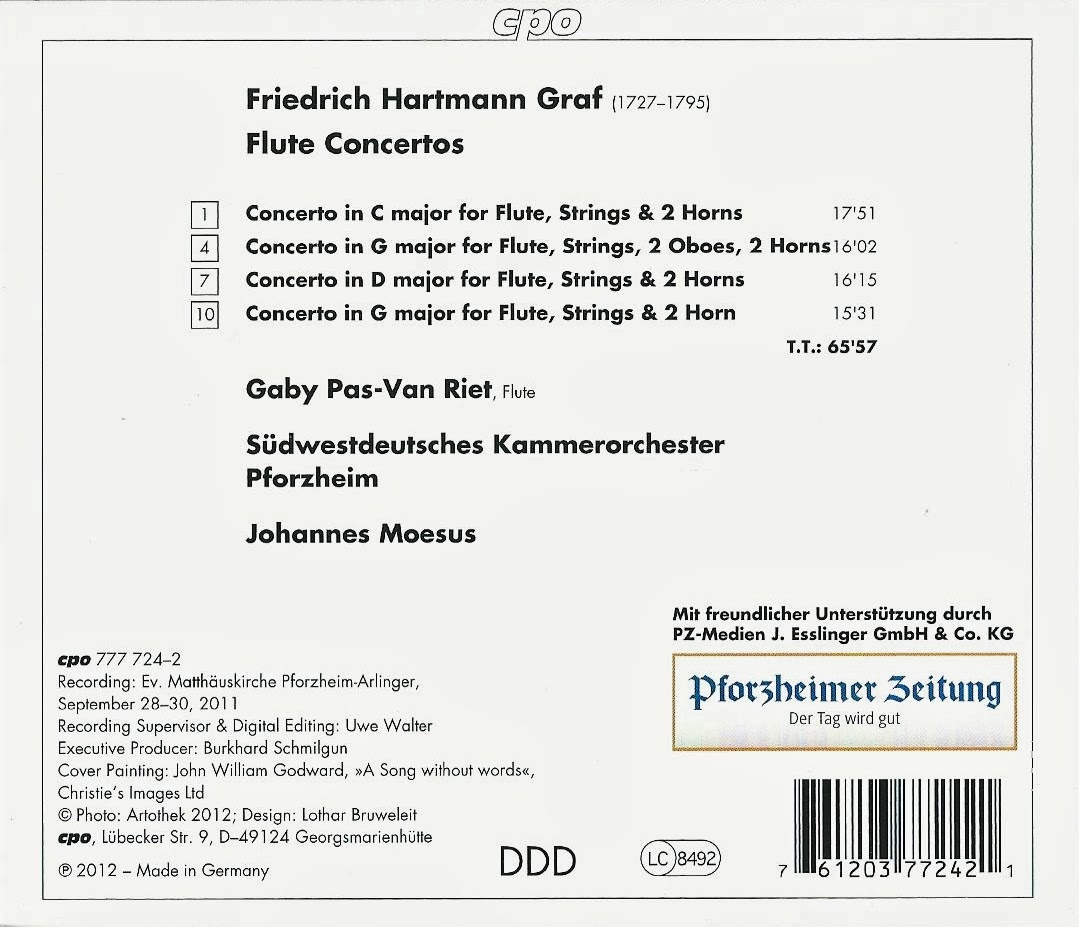