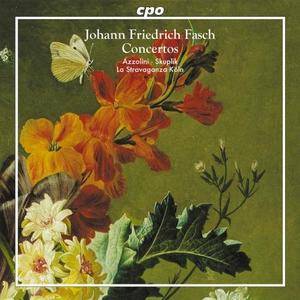 Johann Friedrich Fasch was a contemporary of Johann Sebastian Bach, and that has seriously hampered the interest in his music. It was the German musicologist Hugo Riemann, who at the beginning of the 20th century made an attempt to restore his reputation.
In his own time he was a man of fame, whose works were known far beyond the regions where he worked. One of the most important of these was the time he spent in Leipzig. He became a member of the Thomasschule at the age of 13. He came under the influence of Georg Philipp Telemann, who arrived in Leipzig at the same time. Fasch, who had taught himself to play the keyboard and the violin, started to compose like Telemann, which he did with so much success that some of his works were performed by the Collegium Musicum. In Leipzig he also got to know music from elsewhere in Europe, in particular the concertos of Vivaldi.
In 1708 he started studying law at Leipzig University, and founded a second Collegium Musicum, in which musicians took part who later ranked among the most famous in Germany. These included Pisendel, Heinichen and Stölzel.
From 1712 onwards he travelled through Germany and worked in Gera, Greiz and Prague respectively, until he became Kapellmeister at the court of Anhalt-Zerbst in 1722. He refused the invitation to become Thomaskantor in Leipzig as successor to Johann Kuhnau. He stayed in Zerbst until his death in 1758.
As Kapellmeister he composed a large number of sacred works, among them nine cantata cycles of which all have been lost. Only a number of individual cantatas have survived, as well as some masses and mass movements. There is also a Passion on the well-known text by Brockes.
The main part of his oeuvre which has come down to us consists of concertos and overtures. Although a player of the keyboard and the violin by profession, one of the features of his orchestral music is the prominence of wind instruments, in particular the oboe and the bassoon. This recording delivers some excellent examples of the way Fasch treated these instruments.
In the Overture in G, for instance, the 'overture' has the usual ABA structure. At several moments the orchestra makes way for a trio of two oboes and bassoon. The second and, even more so, the fourth movement (Air I and Air II respectively), contain passages for violin, oboe and bassoon. In the last movement (menuet alternativement) Fasch returns to the wind trio.
The subject of the overture is remarkable, and immediately catches the attention. Just as remarkable are the two bassoon concertos. The Concerto in C is very Vivaldian in nature. In particular the second movement, 'largo e staccato', has a strongly dramatic character. In contrast to this concerto in the Concerto in d minor the solo and tutti roles are less strictly defined. It seems it was originally written in c minor - hence the catalogue number - with a solo part for a bass instrument, which could have been the 'basse de violon' or 'violone'. In the liner notes, Sergio Azzolini writes: "If one performs the concerto with another bass instrument (as in our case, with the bassoon), then one would choose the key of D minor, and it is thus that we have done on the recording of the Concerto a 5. In this version the solo part goes up to g', a range occurring in most bassoon parts by Fasch (…)".
The Concerto a 7 in c minor is a kind of concerto grosso, in which the two oboes and the bassoon are playing the concertino. The Concerto in A is another nice piece of music with an expressive solo part for the violin, in particular in the lyrical 'adagio'.
This recording is a winner in every respect. It is one of the very few recordings which is exclusively devoted to the orchestral music by Fasch. The orchestra plays quite brilliantly and the use of dynamics in the overture is very effective.
The performance of the wind parts is the most impressive aspect of this recording. Sergio Azzolini plays the sometimes very virtuosic solo parts with verve - the ‘allegro' from the Concerto in d minor, for instance - and reaches a high level of expression in the slow movements. The oboists do an excellent job as well, making their contributions pure delight.
Veronika Skuplik gives a convincing interpretation of the violin concerto, with clear articulation and differentiation between the notes. Unfortunately the recording technique has caused a slight irregularity at the second entrance of the violin in the first movement.
Anyone who doubts the qualities of Fasch’s orchestral music should listen to this disc. It certainly makes a passionate plea for the music of this unjustly neglected master of the German baroque.
–Johan van Veen