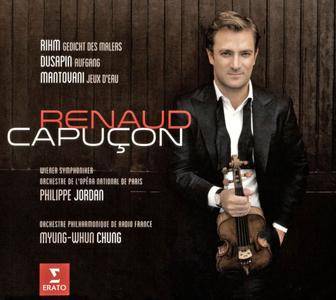 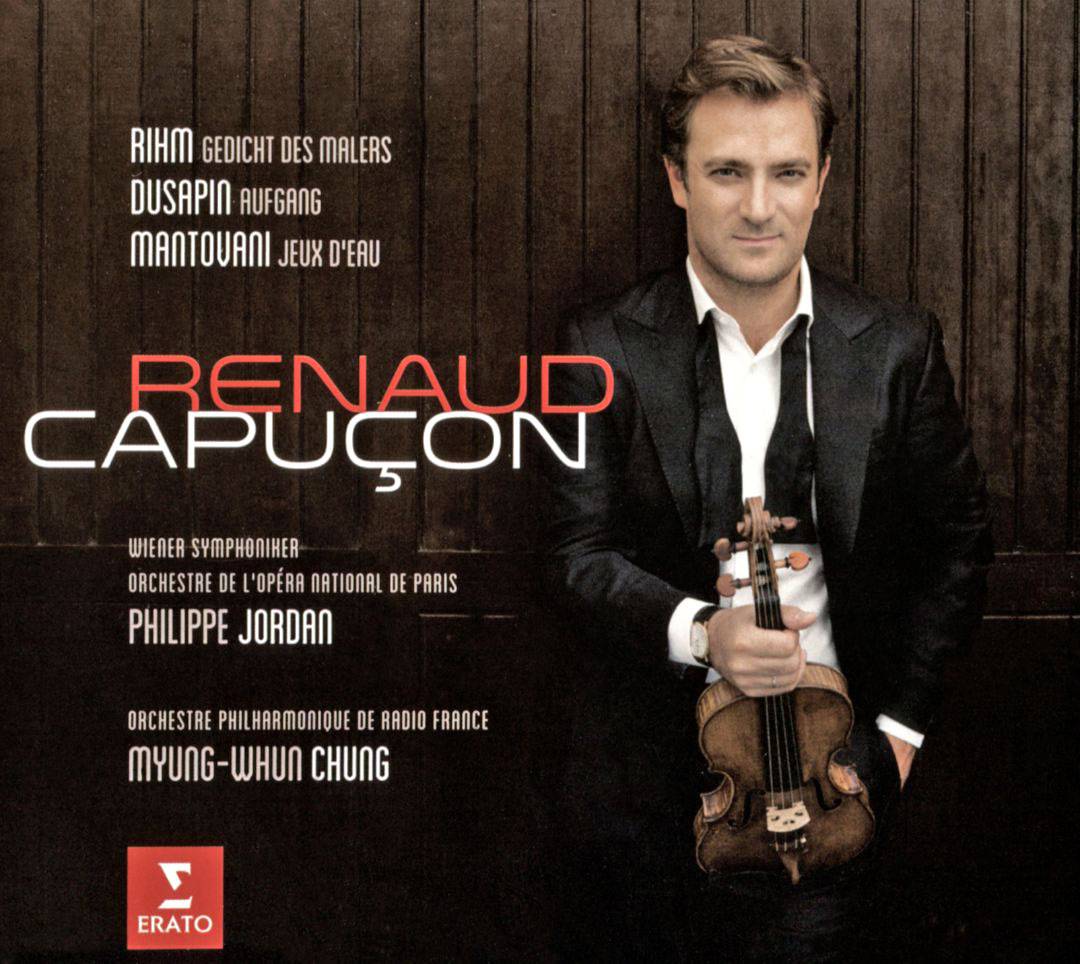 Firmly established as one of the world’s greatest violinists, Renaud Capuçon career both on the stage and as a recording artist has spanned a wide gamut of concerto repertoire, chamber music and recitals. He has a reputation for impeccable performances and fine interpretations of classics and lesser-known repertoire, from his most recent albums with critically-acclaimed readings of the Bach Violin Concertos and the Vasks Violin Concerto, and a recital disc with Khatia Buniatishvili, to the Beethoven / Korngold and Brahms/Berg concertos, Renaud has become known for the breadth of his repertoire, his world-class chamber music partners, and the quality of his playing.

These three violin concertos were all commissioned by Renaud Capuçon, a staunch supporter of contemporary music. The pieces, and the performances of them, date from between 2012 and 2015 and are of diverse origins, and it says something for Capuçon that he elicited music that hangs together from the three diverse composers with whom he worked closely in creating this music. Even with the single-movement structure of Wolfgang Rihm's Gedicht des Malers and Bruno Mantovani's Jeux d'eau, versus the conventional three movements of Pascal Dusapin's Aufgang, the three works share a lyrical mood, a modern, broadly atonal language, brilliant virtuoso treatment of the violin, rich contrapuntal writing in the orchestra, and an orientation toward past musical models. That orientation is clearest in the work of Mantovani (who is not related to the famed easy listening conductor, but admires him); Jeux d'eau, meaning fountains, but also the elusive concept of water games, is an image that has fascinated composers since the 19th century, and you can find hints of many of them in Mantovani's work. Rihm's Gedicht des Malers (Poem of the Painter) portrays the violinist as a painter in sound, referring to the virtuoso Eugène Ysaÿe, the painter Max Beckmann, and perhaps the composer Paul Hindemith of the similarly dense yet exuberant Mathis der Maler. None of this is simple music, but it yields much to repeated hearings. The sound is reasonable despite the multiple origins, and this recording suggests that there's plenty of life in the venerable concerto form yet.

French violinist Renaud Capuçon is clearly relishing playing in live performance these twenty-first century concertos which were written specifically for him. Inspired by the number of commissions given by fellow violinists, notably Gidon Kremer and Anne-Sophie Mutter, when commissioning works Capuçon enjoys the privilege of being able to contribute towards expanding the repertoire of the violin. When working with living composers, Capuçon has stated that he enjoys the collaborative aspect of the project.

The earliest work here is Jeux d'eau from French composer Bruno Mantovani a work he completed in 2012. Like many composers before him, conspicuously Liszt, Debussy and Ravel, Mantovani has used a theme of water. With Jeux d'eau, Mantovani was specifically motivated by “the sound of clear water that flows from a mountain torrent.” It was Capuçon who premièred the score in 2012 at Paris. As the title suggests, the score to Jeux d'eau has an ineluctable aqueous quality marked by writing that feels clean, fresh and fluid. There is a variety of textures in both the violin and orchestra parts and noticeably broad dynamics.

Wolfgang Rihm is one of the pre-eminent composers working today. The winner of several prestigious awards, Rihm has been the recipient of numerous commissions. By my reckoning, Rihm has now written five violin concertos of which the best known is Gesungene Zeit (Time Chant) for Anne-Sophie Mutter who recorded the work on Deutsche Grammophon. Rihm’s violin concerto Gedicht des Malers (Poem of the Painter) was introduced by Capuçon in 2015 at Vienna. Rihm talks about the inspiration for the work coming from artist Max Beckmann, who painted Max Reger a year after the composer had died. Rihm has stated that he could visualise Beckmann painting virtuoso violinist Eugène Ysaÿe in the same way. It is as if the soloist has taken control of the artist’s brush on the canvas. Immediately, the aching intensity of the writing has a Bergian feel and the mainly high lying violin part strongly evokes celestial images. Two main contrasting impressions dominate the work first a mainly cool and shadowy often mysterious atmosphere and secondly episodes of coarsely-hewn agitation. The moods are disrupted by the quickly built screeching outburst at 9.23 and a sudden thunderous eruption at 12.40.

Another Frenchman, Pascal Dusapin, is represented by Aufgang, his concerto for violin and orchestra. In 2008, Dusapin was motivated by conductor Marek Janowski to write a violin concerto, but after some work on the piece, the project didn’t come to fruition. Subsequently a meeting with Capuçon led to the composer reviving the concerto that he completed in 2011. The first performance was given by Capuçon in 2013 at Cologne. Titled Aufgang, the word in English means Ascent, possibly meaning a staircase to the sky, relating to the high register where much of the violin part lies.

Dusapin talks about “emerging light” yet it is the contrasts that are striking. Evident in the opening movement is the very high lying register of the violin part against the orchestra, which becomes increasingly weighty and anxiety laden. Shadowy, infused with nervous tension in the movement two, the violin part gradually gains in prominence and assertiveness. Conspicuous in the third movement is the wild and fiery character at turns coolly expressive.

The liner notes include an essay by Marguerite Haldjian and a note from Capuçon which are helpful and interesting. Recorded live the sound quality across three separate concert halls is uniformly clear and well balanced. There is some minor audience noise but nothing too distracting, and applause has been kept in on two the works.

Playing with robust and impassioned lyricism, Renaud Capuçon is on exceptional form. This is the finest release of contemporary violin concertos I have heard in some years. 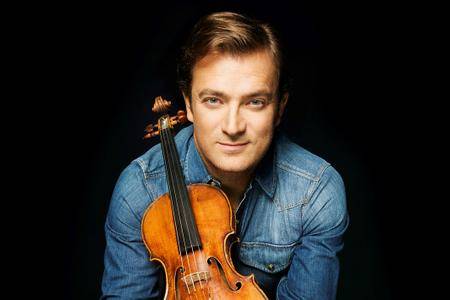 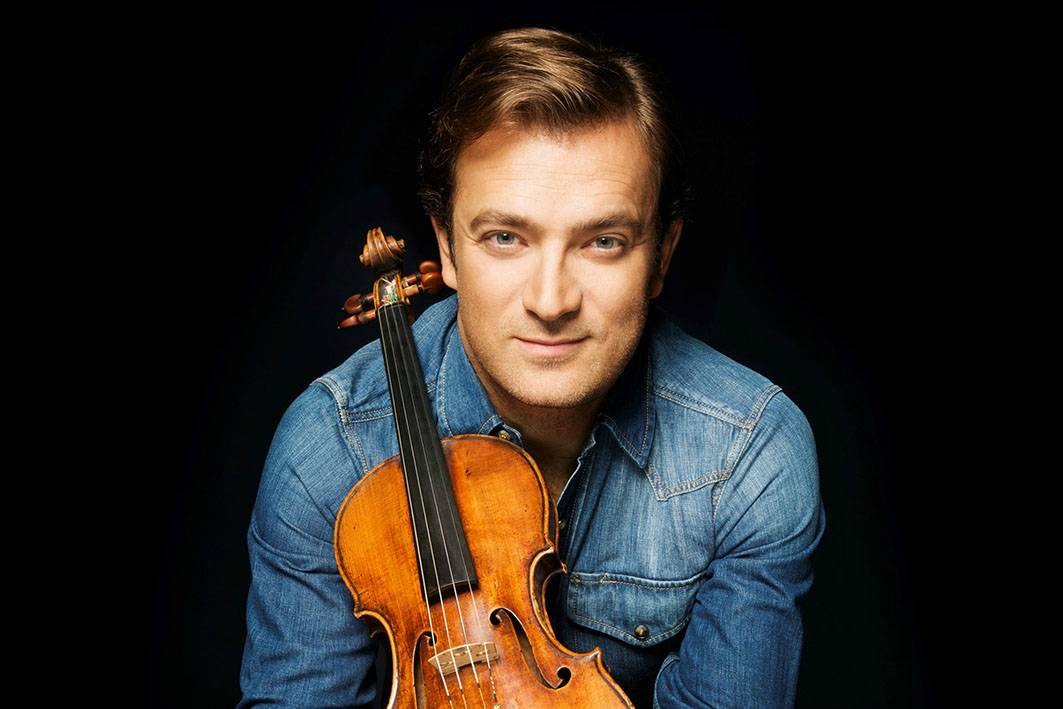 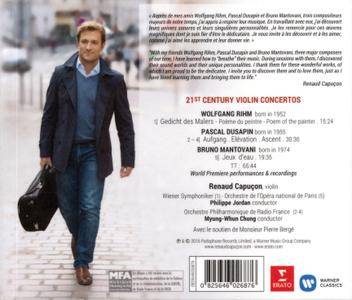 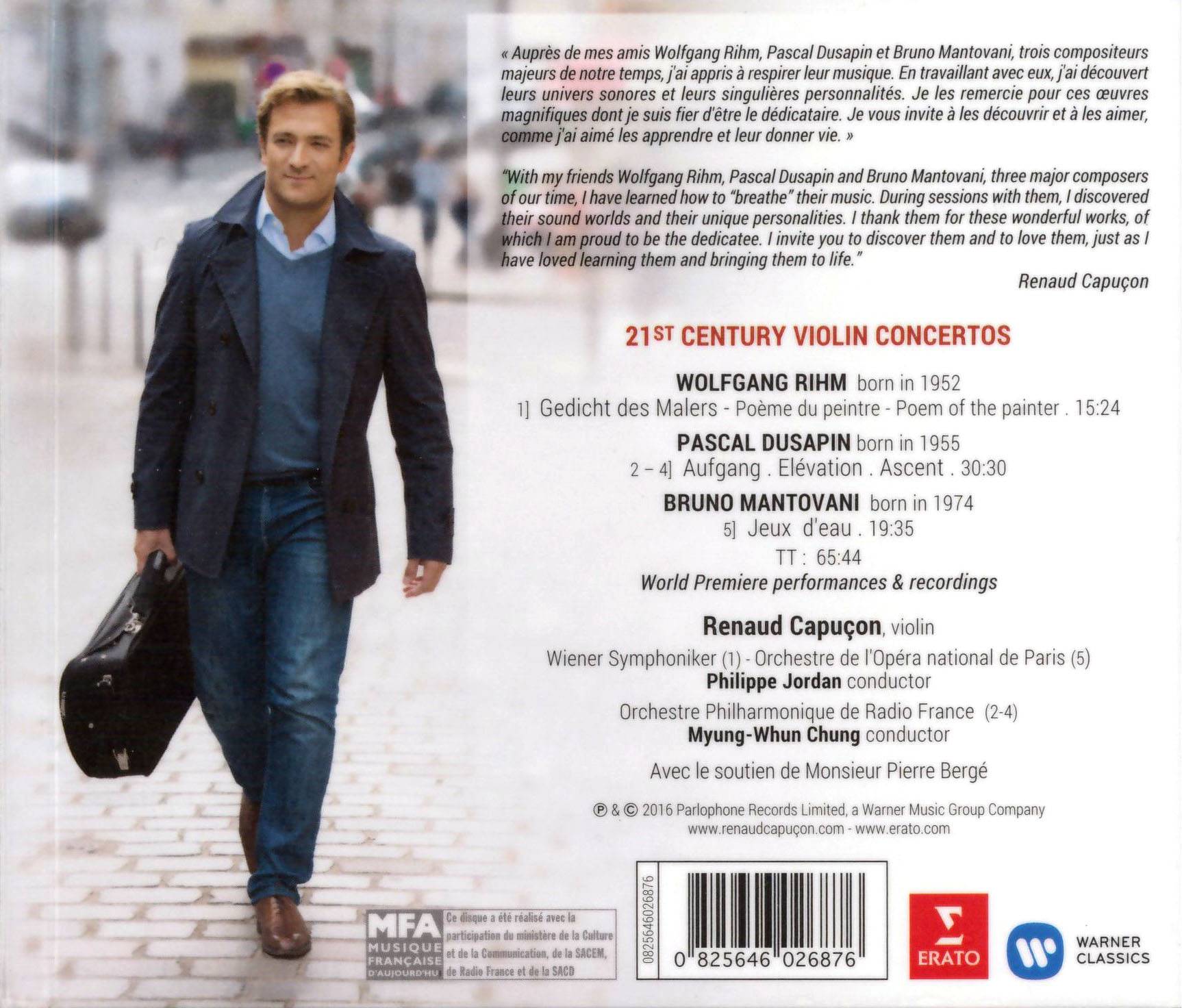