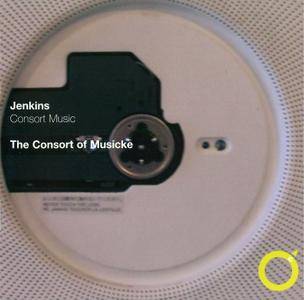 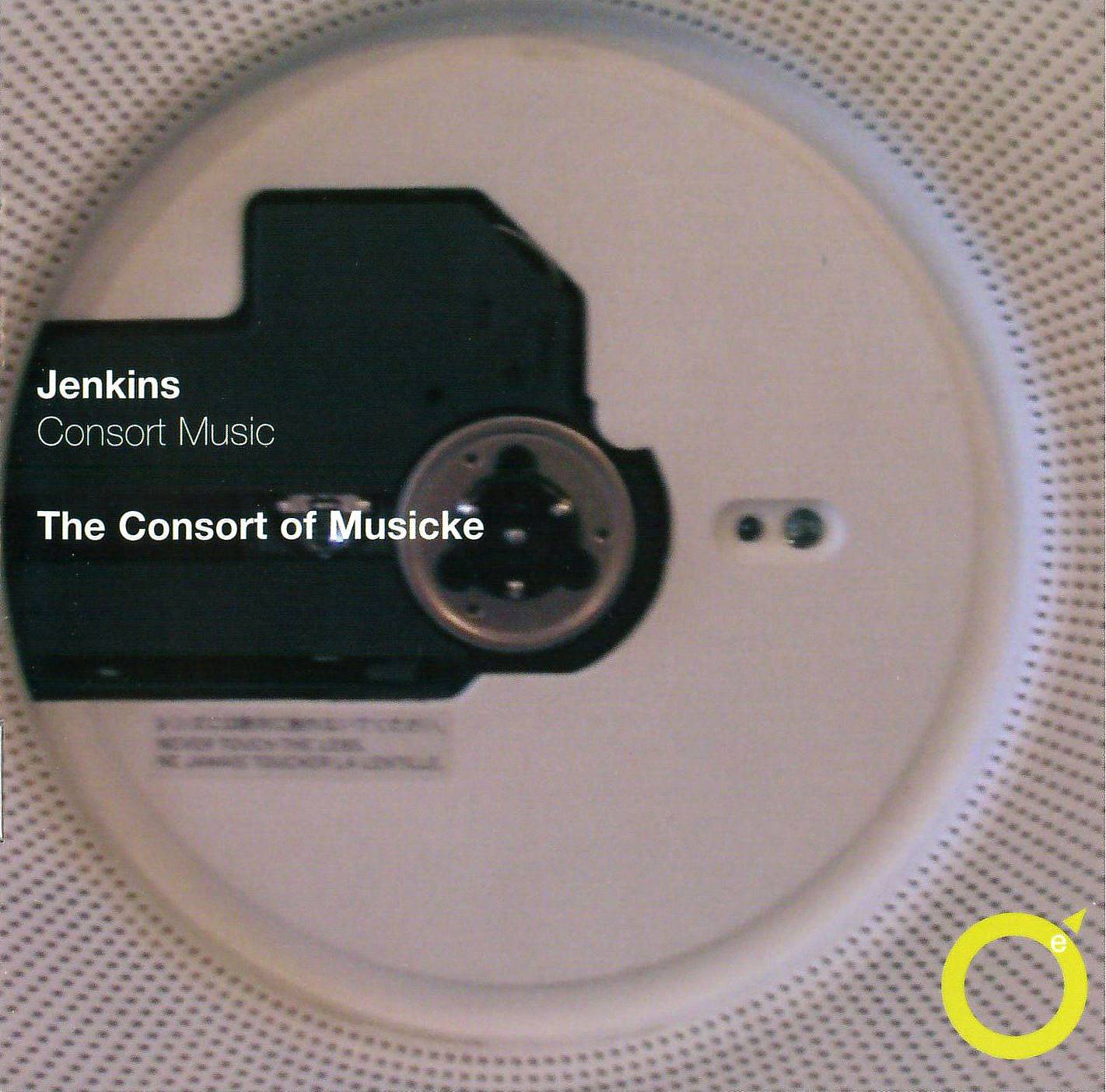 John Jenkins: yet another seventeenth century English composer who deserves to be more widely known. This delightful CD from The Consort of Musicke directed by Trevor Jones is no dutiful study of a hidden but rather uninspiring corner of English early Baroque consort music; rather, a mosaic – rich in color and shape, carefully crafted and full of surprises. Listen, for instance, to the unpretentious, jaunty and appropriately figurative progress through the Saraband (52, tr.6) and the restrained melancholy of the Fancy-Air (4, tr.7). Jenkins' counterpoint is well-wrought, his instrumental palette fresh and crisp and his melodies catchy without being fey or superficial in any way. He is in excellent hands with the Consort of Musicke… eight string players of the caliber of Monica Huggett and Alison Crum violins; Alan Wilson organ and Anthony Rooley theorbo. If fresh, beautiful, expertly-played English consort music appeals to you, don't hesitate to get this gem of a CD – actually a reissue of a Decca disc from 1983: it's unreservedly recommended.

John Jenkins was born in 1592 (four years after the Spanish Armada) and lived almost until the end of the reign of Charles II, dying in 1678. He showed early promise as a lutanist and viola-player and is likely to have served in various aristocratic households – and at the Restoration court from 1660, when he was already in his seventies. During his lifetime he was considered the composer of viol music. Never an innovator, he preferred to draw and build on the work of other musicians, some of whom did plough new furrows.

Coprario, for example, clearly influenced Jenkins' composition of the suites we hear here. Although the latter looked backwards (or maybe glanced to his side) by making the upper parts suitable for the violin or viol whereas Coprario was already expecting them to be played on the violin. Similarly, the In Nomine had its origins a hundred years earlier when composers elaborated a cantus firmus from Taverner's Gloria Tibi Trinitas mass; by Jenkins' time the fashion was all but moribund if not dormant. Jenkins, though, writes an elegant, beautiful and profound work, which is perhaps the CD's high-point. It's the best of, indeed very typical of, Jenkins… somber and dignified without dragging, thoughtful without so much as a touch of indulgence.

By no means all melancholy, there is a sureness and simple strength in this neglected music. When combined with an equally crystalline tenderness of arrangement and beauty of melody it creates, frankly, the most heavenly sound. It also possesses profundity and transparency, the sort only genius and near genius is self-effacing enough to trust to the innocent ear. And these qualities are perfectly conveyed on this representative recording. It contains fifteen Suites, Fantasias, dance movements and the aforementioned In Nomine which will both whet the appetite (for other similar recordings, perhaps – by Phantasm on Avie 2099; The Locke Consort on Channel Classics 17698, The Apollo Consort on Somm 217 or even the Jérôme Hantaï Ensemble on Naïve 8895). It will also simply satisfy for its own sake.

The viol consort arrangements and Fantasias have a conversational, almost chatty, feel. A good example of this is the polyphonic Fantasia (12, tr.10). But this is no stylistic trick: out of the 'dialog' almost always emerges a substantial modulating theme which lends immense satisfaction to the development. The members of the Consort of Musicke articulate this structure with aplomb and energy.

The remarkable thing about these pieces, perhaps, is how different they all are and how fresh and new the sound conveyed by The Consort of Musicke without effects or over-dramatization. Although these are recordings made over 20 years ago, the sound is contemporary and eminently satisfying. You will, though, have to forage in the rather dense liner notes to get proper descriptions of the pieces and who is playing what. That's well worth the effort, though. This CD is a real find. Well done Explore Records!

For someone as long-lived as John Jenkins, we know remarkably little about his early life and his training. His life spanned four reigns plus Cromwell’s Commonwealth. He was probably the son of a Maidstone cabinet-maker, but his father left some eleven musical instruments in his will so music was somehow in the air. In the absence of any further concrete evidence, it is supposed that Jenkins was placed as an apprentice to a musician resident in the household of a gentleman.

A connection to the gentry would be important for much of Jenkins’ life. He played for Charles I and had a court appointment under Charles II, but would have been over seventy when Charles II was restored. Not surprisingly he spent much of his later life living with various aristocratic supporters in East Anglia. This was also where he spent the interregnum, providing music for a Catholic family who were intent on keeping their heads down.

Much of his music was written to be played in the great houses. These are not works written for the concert hall, but the players must have had some considerable expertise. A thread that goes through many of the pieces, is the rhythmic interest in melodic lines and the sheer trickiness of Jenkins’ writing.

This selection of his music, originally recorded in 1981, provides examples of his writing for three types of ensemble. First of all comes the music for viol consorts, Fantasias and In Nomines for 6, 5 and 4-part viol consorts. This is seriously satisfying music, lively but not too showy in which you can imagine Jenkins and his fellow players taking pleasure in its almost conversational give-and-take.

Not all Jenkins’ writing was serious. He wrote a significant number of dance-inspired lighter pieces. Here we also see another change to Jenkins’ style, the gradual replacement of treble viols by violins. In his scores Jenkins gives the option of playing the upper parts on viol or violin. In these cases the Consort of Musicke choose violins.

The Fantasias developed into Fantasy Suites, usually three movement works where the opening Fantasia is followed by two dance-inspired movements and featuring a significant role for the organ. These suites were influenced by the example of Coprario, but whereas Coprario’s writing is eminently suitable for the violin, Jenkins writes his upper parts in such a way as to make it possible to play them on violin or viol.

His final Fantasy Suites for two violins, two bass viols and continuo, a set of eight represented on this disc by Fantasy Suite no. 1 in G minor, probably represent his swansong. Though as with many of Jenkins’ works, exact dating is difficult.

I am a little confused as to who is playing what on this disc. The track-listing omits to say for which instrumental grouping the works were written. You must comb the article in the CD booklet to find this information. This article also states "On this recording the violin is used for all optional treble parts" without making clear which works this applies to, which is not terribly helpful. All the information is there in the booklet, but not in a form easily digestible by the listener. Still, that is really a small niggle.

Naxos have deleted their disc of Jenkins’ consorts so anyone wanting to explore this fascinating but neglected composer must look further afield. The performances on this disc do not show their age and represent music-making of a high order. I could imagine the viol consorts being played with darker textures, here the players keep the lines light and beautifully shaped and articulated. This disc is available at mid-price, a bit more than the Naxos disc, but certainly worth considering. 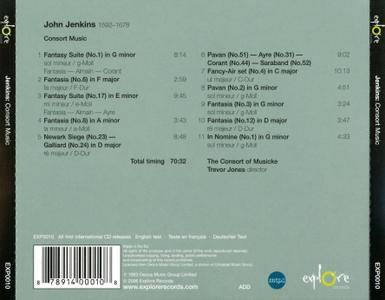 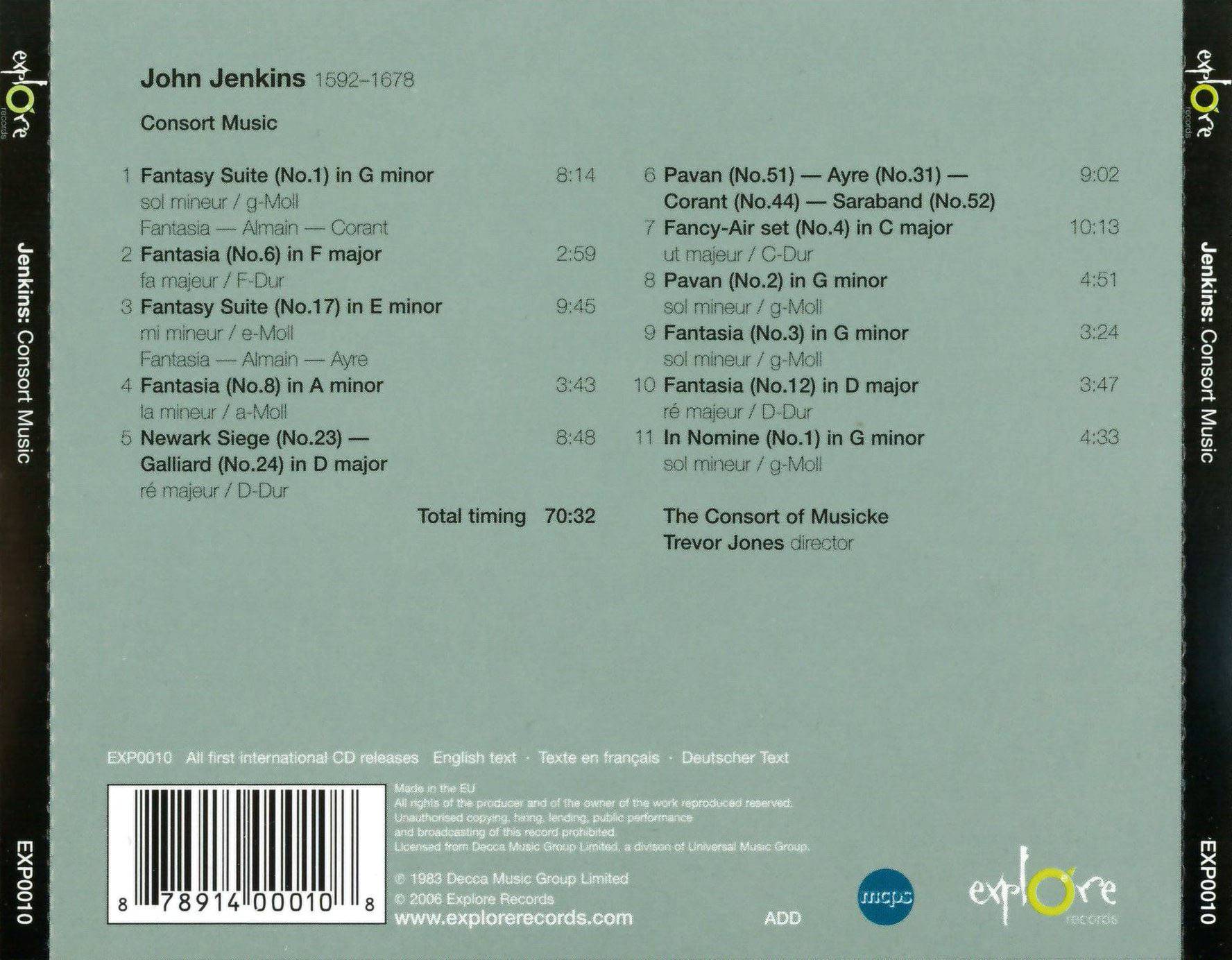