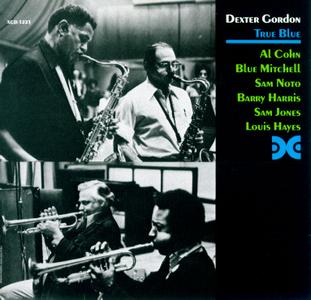 True Blue is led in title under the auspices of Dexter Gordon as a welcome home party conducted by Don Schlitten for the expatriate tenor saxophonist in 1976. Essentially a jam session, this very talented septet features a two tenor-two trumpet front line, utilized to emphasize the soloing strength of the horns, not necessarily in joyous shouts or big-band like unison outbursts. The real star here is Barry Harris, and if you listen closely to his comping behind the soloist or his many colorful chords and single-line runs, you realize how brilliant he continued to be in his prime during this beyond-bebop time frame. The distinctly different, legato flavored sound of Al Cohn contrasts nicely to the broader range and richer tones of Gordon, while Blue Mitchell's warm West Coast trumpet phrasings also run aside but a little behind the animated and clipped brassy sounds of Sam Noto, a player deserving much wider recognition, and playing to the hilt on this recording. The session kicks off with the classic superimposed melodies of "Lady Bird" and "Half Nelson," with melodies split between the trumpet and tenor tandems.