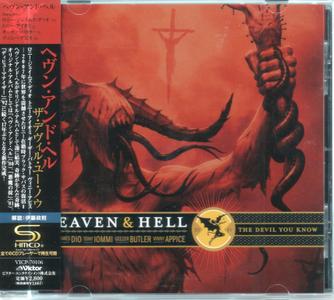 It's almost a blessing that, for legal reasons, this four-piece can't call itself Black Sabbath. It only serves to hammer home the point that with Ronnie James Dio up front and Vinny Appice in back, Tony Iommi and Geezer Butler express a very different side of their musical personalities than they ever did with Ozzy Osbourne on vocals and Bill Ward on drums. Where the original lineup was an ultra-heavy blues band, with a rhythm section that never failed to swing (OK, they failed a little bit on "Sweet Leaf"), when Dio came on board in 1980 the group was reinvented as a heavy metal juggernaut. While Iommi's riffs remained crushingly heavy, the rhythms got faster on songs like "Neon Knights," "Turn Up the Night," and "Mob Rules," and the lyrics abandoned the earthly concerns of "Paranoid" and "Hand of Doom" for Dio's abstract symbolism and myth-making.