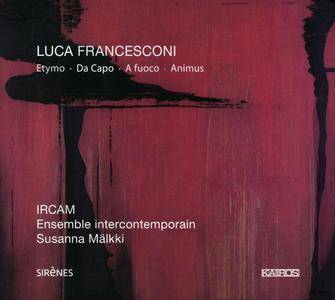 Luca Francesconi is one of the most prominent Italian composer of his generation with a substantial and varied output to his credit. The release under review provides a good idea of his output although all the works recorded here are already some ten or twenty years old. Da Capo (1986) for small ensemble is the earliest work here and is probably one of Francesconi’s best-known and most popular. It is not difficult to understand why. It is a brilliantly scored, colourful piece full of nice instrumental touches and lively rhythms, although it opens and ends in a rather subdued manner. The other works were all composed at about the same time: between 1994 and 1995. They, too, display a considerable variety of means and moods. Etymo is the most substantial both in length and in content. The title, Etymo (as in etymology) is about the search for the origin and development of language. It sets texts from various poems from Baudelaire’s Les Fleurs du Mal for soprano, large ensemble and electronics. The final words are drawn from Baudelaire’s Carnets intimes.