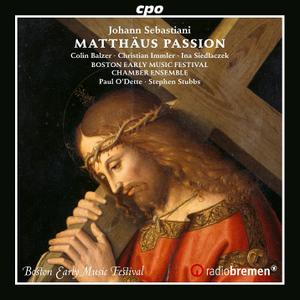 Johann Sebastiani's name no doubt will be familiar only to a few certified music experts. Born in Weimar in 1622, Sebastiani spent a good many years of his life in Konigsberg, where he arrived around 1650 and later was appointed court chapel master. He composed countless occasional works as well as a St. Matthew Passion (1672) – a welcome addition to CPO's picture of Lutheran church music and a work closing a gap in the history of Passion settings between Heinrich Schutz and Johann Sebastian Bach. Stephen Stubbs, Paul O'Dette, and their Boston Early Music Festival Chamber & Vocal Ensemble have fond memories of Bremen, where they have recorded in the radio broadcast hall on various occasions and produced Marc-Antoine Charpentier's Baroque opera La Descente d'Orphee aux Enfers, for which they won a Grammy Award in 2015. Their current release featuring Johann Sebastiani's St. Matthew Passion pays tribute to Konigsberg's music culture and to the composer who was one of its central representatives.