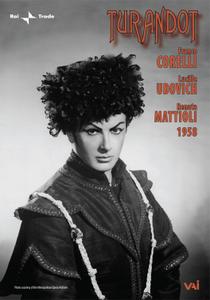 The legendary Franco Corelli, world-renowned for his portrayal of Calaf, here stars in a magical RAI television production of what many consider to be Puccini’s crowning achievement. Under the creative direction of Mario Lanfranchi, this Turandot resonates with elements of Kabuki. Corelli, at the peak of his vocal powers, finds his match in the fiery Turandot of Lucille Udovich. Among her many credits, Udovich sang opposite Corelli in the noted 1954 revival of Spontini’s Agnes di Hohenstaufen at the Maggio Musicale Fiorentino; she also sang the role of of Elettra in the 1956 EMI studio recording of Mozart’s Idomeneo, under the direction of Sir John Pritchard.