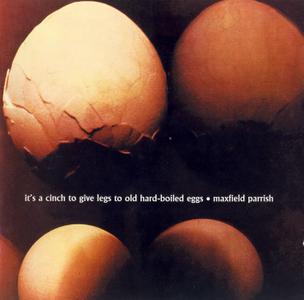 Maxfield Parrish's sole album, It's a Cinch to Give Legs to Old Hard-Boiled Eggs, is a perfect example of the direction that many West Coast rockers were taking in the late '60s, incorporating country stylings into adventurous rock songs. In this respect, It's a Cinch… falls neatly between the Grateful Dead at their rootsiest and cosmic cowboys like the New Riders of the Purple Sage. The high, lonesome melodies and lead singing and three- to four-part harmonies connect the band's inspirations and mentors, such as Jerry Garcia (who taught some members guitar) and the Beatles, to early-1900s mountain music that was so influential to all of the Californian country-rockers. However, the songs on It's a Cinch… are not nearly as explicitly country as NRPS, often owing as much to the adventurous mid-period music of the Byrds, and even Middle Eastern drones. This latter effect was probably most prominent due to the presence of the several members of Kaleidoscope who played on and produced the record.