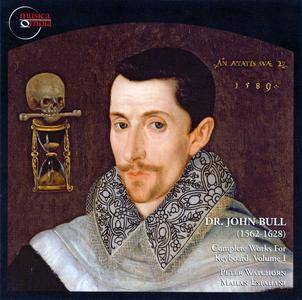 The portrait of John Bull on the cover of this two-CD U.S. release gives an idea for the uninitiated of what to expect from the composer's music: it's intense, single-minded, and even a bit demonic (although the hourglass topped with a skull with a bone in its mouth is apparently an alchemical symbol). Bull was, in the words of an unidentified writer quoted by harpsichordist Mahan Esfahani, "the Liszt of the virginals." The most immediately apparent feature of his music is extreme virtuosity, on display especially in the mind-boggling set of variations entitled Walsingham (CD 1, track 8) and in the galliards of the pavan-galliard pairs. But the opposite pole in Bull's style exerts just as strong a pull: he is fascinated by strict polyphony by what would be called harmonic progressions, and by the close study of the implications contained within small musical units. As spectacular in their way as the keyboard fireworks are, the three separate settings of a tune called Why Ask You? on CD 2 are marvelous explorations of compressed musical gestures.