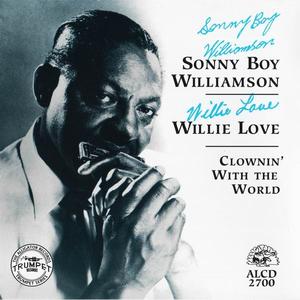 These sixteen tracks are split equally between Sonny Boy Williamson II and pianist Willie Love, who befriended each other in the early 40s, and recorded a number of sides for Trumpet records. All eight Sonny Boy-numbers are previously unreleased, and the fidelity is very good, better than on Trumpet's other Sonny Boy Williamson-releases. Rice Miller (Sonny Boy) is backed by various electric combos. Three cuts feature Willie Love on piano, and Miller's harp blowing is augumented by the presence of a saxophone player on five tracks. Here are early vesions of "Keep It To Yourself" and "I'm Not Beggin' Nobody", as well as a great "Shuckin' Mama" and the piano-driven boogie of the title track. And it's no surprise that Miller's playing and singing is every bit as impressive as on his later Chess releases…