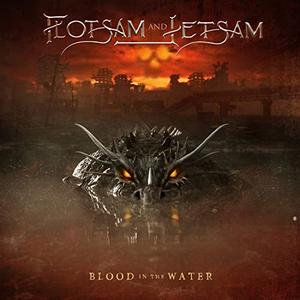 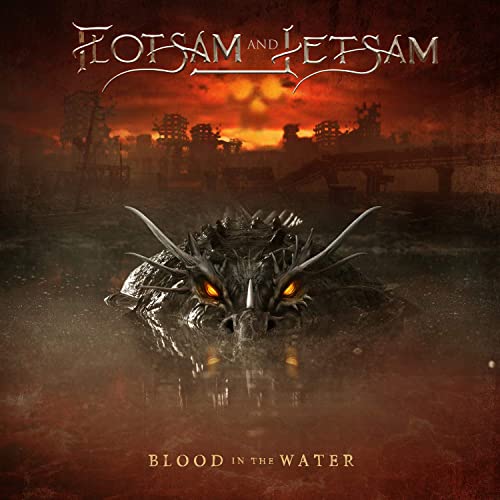 Few shadows cast as wide as that of a former member of the fold exiting and going on to what can only be described as a contender for the biggest phenomenon in metal. Apart from Exodus, who suffered this fate when their pentatonic scale shredder Kirk Hammett joined the Metallica clan, the only band who can claim to have been afflicted by this fate to a greater degree was the trailblazing power thrashing institution out of Phoenix, Arizona dubbed Flotsam And Jetsam. Despite a long and prolific career following his exodus, the specter of former bassist Jason Newsted has hung over this outfit, to the point where it is rare to have a conversation about the band named from the scattered booty of a seafaring vessel without his name being dropped in the first sentence. Nevertheless, recent years have seen these nautical scavengers overcoming this disposition with a streak of thrash-happy brilliance, of which 2021’s “Blood In The Water” stands as their strongest outing since 1988’s “No Place For Disgrace.”

In similar fashion to fellow mid-80s wrecking crews Heathen, Death Angel and Overkill, this Southwestern-based quintet reminisces upon the past heyday of thrash metal without overtly dwelling upon it, employing all of the latest studio bells and whistles to attain a colossal sound. Relative to their near equally powerful 2019 last entry “The End Of Chaos”, this entry follows a similar formula of compact, high octane bangers that cover about roughly the same amount of time in 12 songs that they did with 8 or 9 back in the 80s. Be this as it may, the modern incarnation of this band is no less elaborate than it was during the band’s formative period, as longtime axe-man Michael Gilbert and his greener compatriot Steve Conley cut heads with an absolute fury, rivaling the recent output of Testament’s famed 6-string duo of Skolnick and Petersen. Along with the wild drumming display of Ken Mary and the dark, pounding and occasionally flashy bass work of the newly recruited Bill Bodily of tech death extraordinaire outfit Contrarian, a massive juggernaut of sound is formed to accompany front man Eric A.K.’s gritty yet soaring vocals across the seven seas.

Pummeling the waves with the ferocity of an icebreaker ship cutting through the waters of Antarctica, this album kicks off by firing on all cylinders. With the aid of a massive orchestral patch at its inception, the opener and blistering title anthem “Blood On The Water” delivers the speed and bluster like its falling out of fashion, underscoring the unique ability possessed by engineer Jacob Hansen to turn ones speakers into weapons. This mode of impact-based, frenetic aggression with a side order of infectious hooks proves to be the modus operandi behind a plurality of this album’s subsequent anthems, with the pummeling punch of “Burn The Sky” and the more power metalized fury of “Brace For Impact” chasing the aforementioned opening anthem with an equally potent one-two-punch. Not content to leave it as an opening trilogy of modern thrashing carnage, the nimble riff monster “A Place To Die” lays down the swift gallops with a vengeance and lands on a dense harmonic chorus hook that has a pretty strong Iron Maiden-like flavor to it, allowing A.K.’s smoother high range to make some occasional waves.
Nuance isn’t really a part of Flotsam And Jetsam’s stock and trade, but this isn’t to say that they aren’t beyond mixing things up a bit, and they hit some interesting territory when not going full speed ahead. The more mid-paced romp “Walls” has a bit more of a melodic, old school heavy metal vibe to it, and really lays on the Maiden-vibes wherein the harmonized lead guitar hooks are concerned. Likewise, the slower paced “Cry For The Dead” ventures into a brilliantly haunting fit of power balladry, shifting from a dreary, clean guitar driven dirge to a biting Middle Eastern crescendo in a somewhat jarring but highly effective fashion, and stands as one of Eric’s standout vocal performances. The generally fast paced “Dragon” thrashes it up aplenty during an agitated verse segment, but cadences on a brilliantly tuneful chorus line that blurs the lines between Judas Priest and Helloween. But arguably the biggest surprise of the album is almost shred-infused display heard on “Undone”, which is similarly fast to the thrashing material heard on here, but just goes over the top on the lead guitars and could almost be chalked up to this band’s answer to what bands like Cacophony did back in the 80s.
There are no weak links, no slouches, nor anything that could be dubbed filler to be found on this album, it’s just one continuous barrage of brilliance that only real varies in terms of absolute velocity. It’s easily a worthy rival to what Testament, Overkill and Death Angel have been offering up of late, and it’s definitely a cut above most of what the so-called Big 4 has been up to recently. Though this writer personally doesn’t think that Flotsam And Jetsam will ever top the classic duo that were “Doomsday For The Deceiver” and “No Place For Disgrace,” this is the closest that they’ve gotten to doing so thus far, and it should put to rest any notion that this band can’t be talked about apart from being the springboard for Jason Newsted’s career. This isn’t an exercise in reinventing the sub-genre, but more a refined, higher octane version of the more melodic and old school metal-infused that they’ve been offering up since 2016’s eponymous comeback. Far from collecting barnacles, this veteran thrash team have salvaged one of the more impressive hauls of 2021 so far.