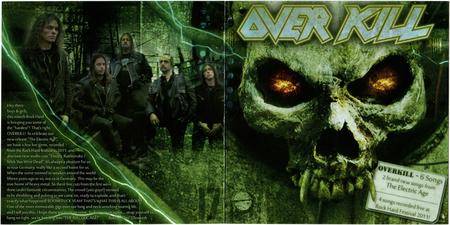 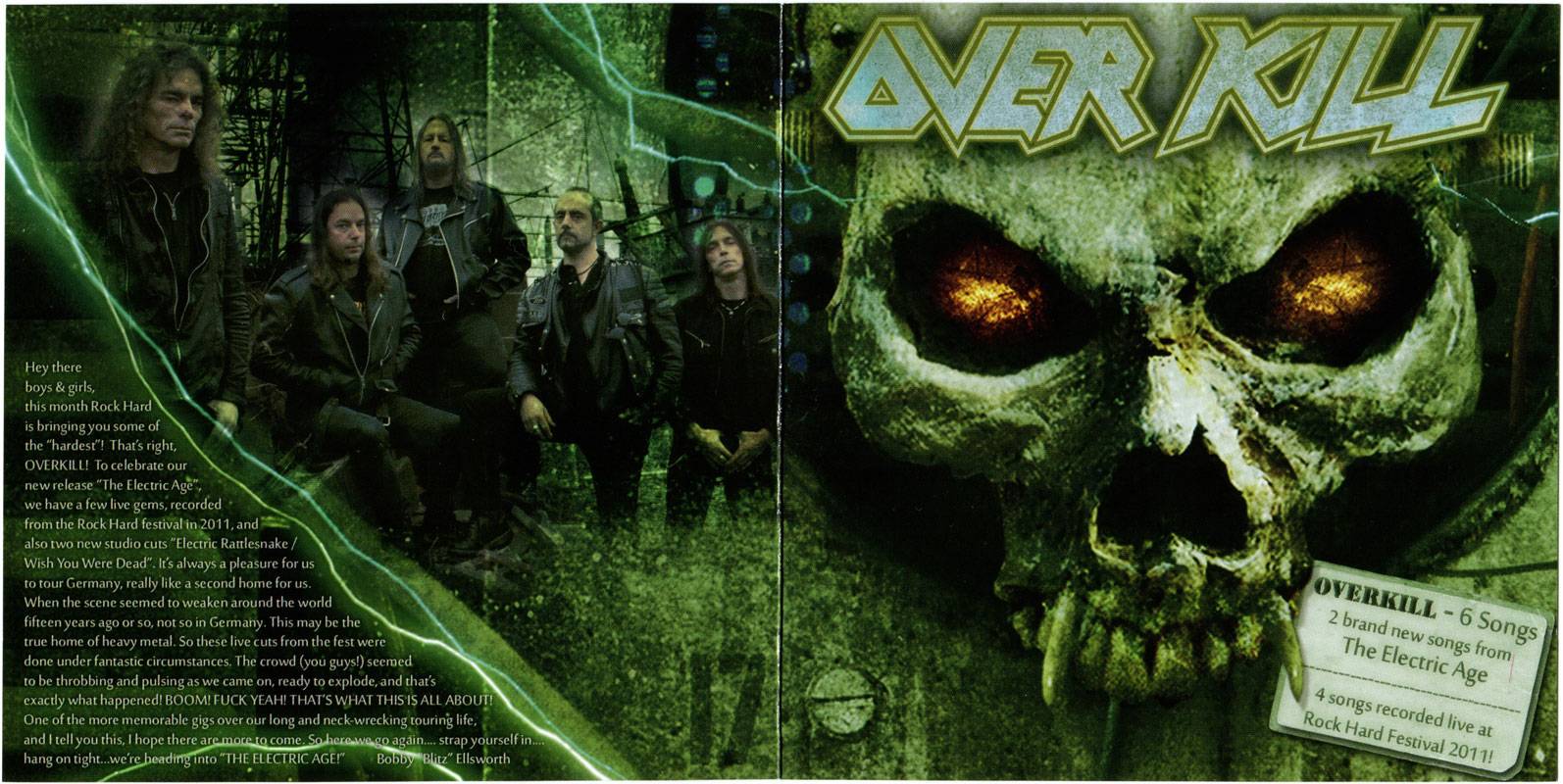 6 Songs represents a functional-enough trial run of the supercharged inner workings dwelling inside The Electric Age. It also tosses in a bevy of modern live recordings that prove that Overkill can still deliver the goods up close and personal. While "Electric Rattlesnake" suffers from the common problem of most Overkill singles in that it is at least two minutes too long, it manages to squeeze by without flagging too much primarily due to surprises like the doomy break right before the solo. The chorus is markedly ridiculous, with Ellsworth throwing around terms like "shake and bake", but the incendiary speed metal cooking under the verses is dead serious and thrashes as such.

Just like the rest of The Electric Age, "Wish You Were Dead" exists as a throwback variant of the modern style introduced in earnest on Ironbound. While not a personal favorite, it features a high-octane main riff and more off the wall lyrics than you can shake a stick at. These two album cuts benefit from the massive production values present on The Electric Age, achieving the precarious balance between underproduced grit and modern sheen. I would have rather preferred "Black Daze" or "Drop the Hammer Down", but you can't win 'em all, even with Overkill.

The four live tracks from Rock Hard Festival 2011 bring Overkill's output full circle, featuring two of the band's earliest compositions alongside two current live staples. "Give a Little" is undoubtedly the more interesting of the two modern cuts from a songwriting viewpoint alone. The operatic warbling Ellsworth busts out near the midway point of the song is something rarely seen post-Taking Over and worth the price of admission on it's own. Otherwise the song is just one of the few more measured stompers present on Ironbound, serving as the final throes of the groovier post-'90s style that came to a head on albums like ReliXIV.

The real unmistakable treat on 6 Songs is the inclusion of two ancient classics delivered with a modern twist. "The Beast Within" is my personal favorite pre-Feel the Fire track, and to this day I believe it would have served the band well to include it on their first full-length as opposed to the pointless cover or "Raise the Dead". "Death Rider" is certainly nothing to scoff at either, exuding more sinister speed metal attitude than nearly anything else written in '83. While these songs were originally written when Ellsworth's vocals were so high-pitched he sounded nearly female, the grittier tone he espouses today gives them a whole new layer of attitude that breathes new life into otherwise archaic compositions.

While Overkill's current lineup lacks stage presence, they have no problem delivering material both old and new with flawless tenacity. Linsk has such complete control over his instrument, he often experiments and adds new twists and passages to solos. The gravely inflection Ellsworth has recently been playing up converts well into the live arena. As usual, his between-song banter is anything but boring, and he can still nail the operatic warbling present on old classics like "The Beast Within".

6 Songs could have easily been yet another pointless little EP pumped out due to contractual obligations with the label. Overkill manages to fly in the face of convention yet again, giving fans plenty of material to chew on, including rare cuts that give this EP value unique to itself. Well done, guys. 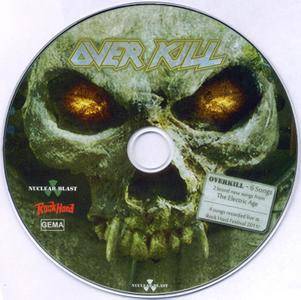 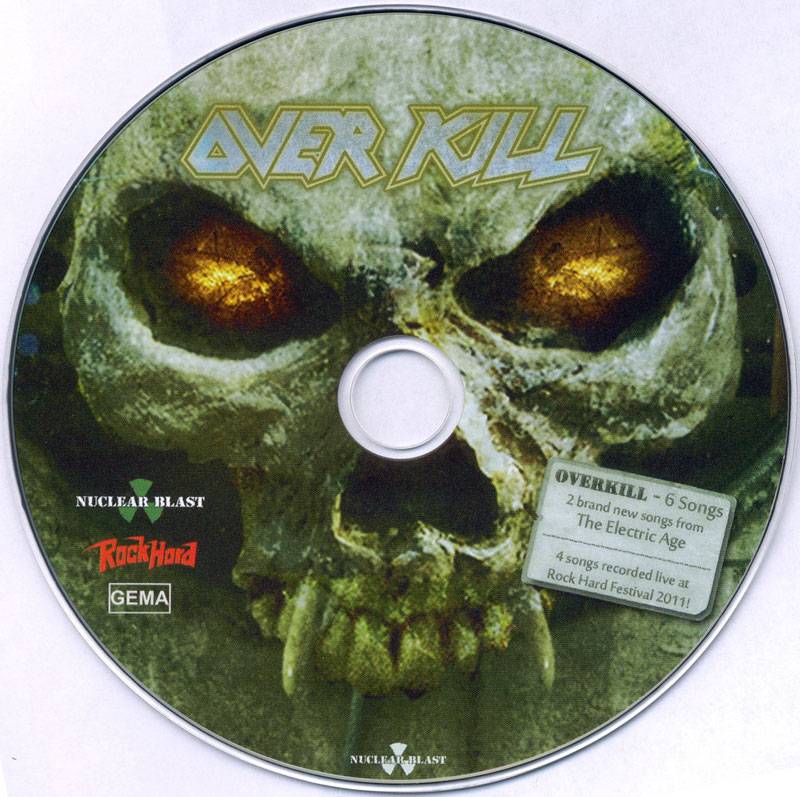 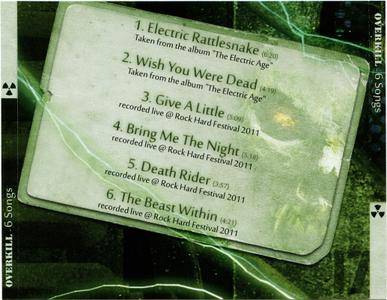 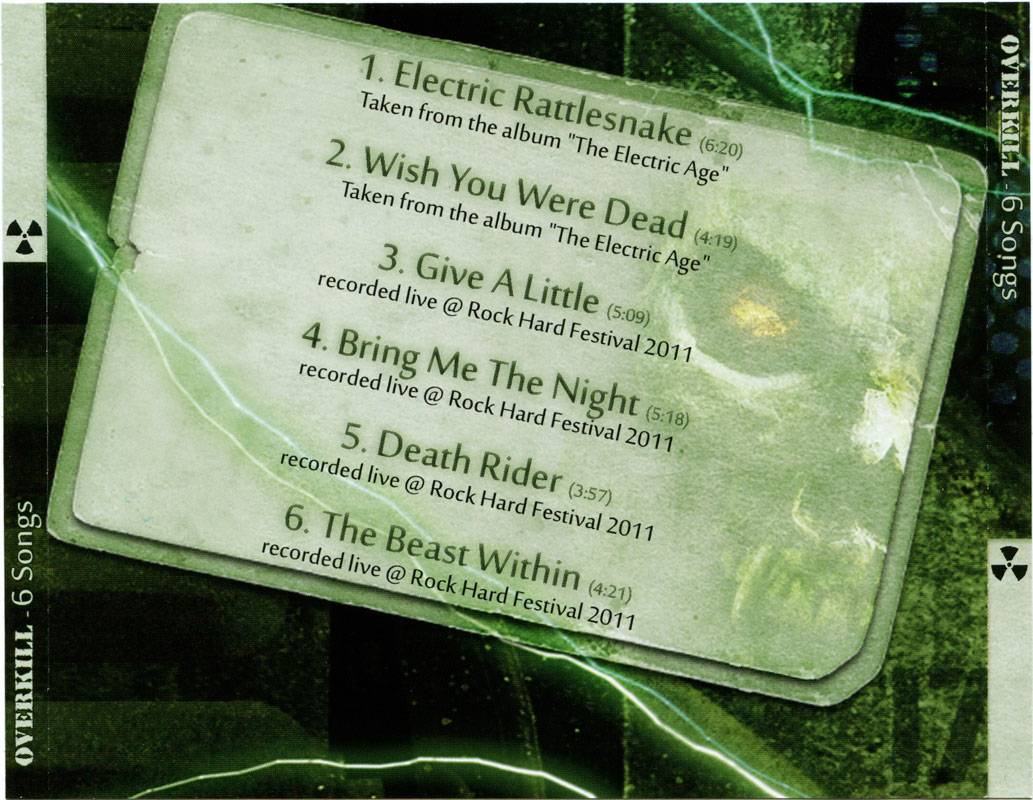 Overkill in my Blog