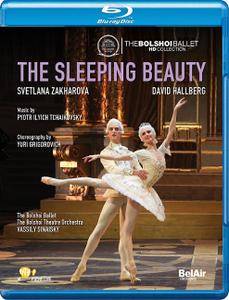 The choreographer, Yuri Grigorovich presents a new version of one of his most famous choreography for a breath taking experience in splendid sets designed by Ezio Frigerio and more than 400 new costumes designed by Franca Squarciapino. The american superstar dancer David Hallberg is Prince Désiré. Hallberg is the first main american soloist ever to be hired by the Bolshoi Ballet. Princess Aurora is danced by the principal Svetlana Zakharova, well known by Parisian audience thanks to her many performances at the Palais Garnier. She is also the soloist of the best seller “Pharaoh’s daughter ” DVD released by Bel Air Classiques in 2004. They are joined by a great cast : Maria Allash (Lilac Fairy) , Artem Ovcharenko (Bluebird) and Nina Kaptsova (Princess Florine).