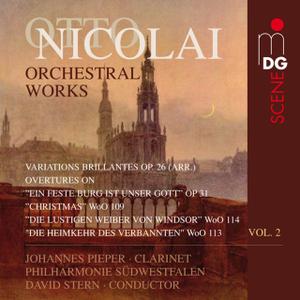 Otto Nicolai is known to most listeners, at least outside Germany, for his opera Die lustigen Weiber von Windsor (The Merry Wives of Windsor), and among most of those specifically for the opera's sparkling overture. Nicolai, who died at age 39, wrote four other operas and various pieces of orchestral music as well; the latter has been collected in two volumes by the German audiophile label MDG, performed by the little-known and exquisitely confusingly named Southern Westphalian Philharmonic – Orchestra of the Land of North Rhine–Westphalia (entirely capable, for all that). The program doesn't make perfect sense.