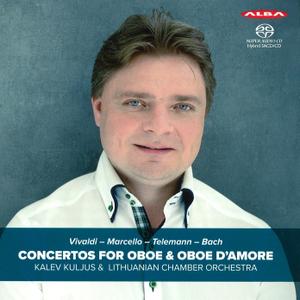 Hamburg-based Estonian oboist Kalev Kuljus earned his music degrees from the Estonian Academy of Music, the Lyon National Conservatory, and the Music University Karlsruhe. He has performed alongside many renowned orchestras, including the Tallinn Chamber Orchestra and the Estonian National Symphony Orchestra. Kuljus’s repertoire covers music from Baroque to Contemporary, and many Estonian composers have dedicated works to him. This album, Kuljus’s debut, includes some of the most loved oboe concertos from the Baroque era from Vivaldi, Telemann, Bach, and Marcello. Working alongside the Lithuanian Chamber Orchestra, Kuljus sounds at his very best in these recordings.