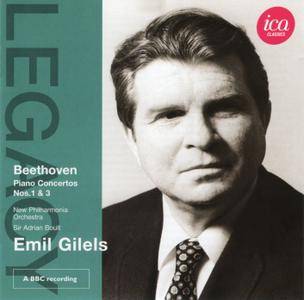 Emil Gilels, along with fellow Russian artists, Sviatoslav Richter, David Oistrakh and Mstislav Rostropovich represented four of the greatest artists of the 20th Century. These live performances from London's Royal Festival Hall in 1967 capture Gilels at his best playing in front of an audience away from the confines of the studio. William Mann in the Times wrote after the concert of Concerto No.3, "For all his truly Beethovian brio in the first movement, Gilels never allowed this to get the better of the clarity and firmness of his phraseology, indeed his opening was like chiselled stone. There was immense dignity in the Largo and in the Rondo, taken at what I thought to be exactly the right speed, came across with remarkable vivacity". These archive recordings in stereo are extremely rare and have never been issued before.