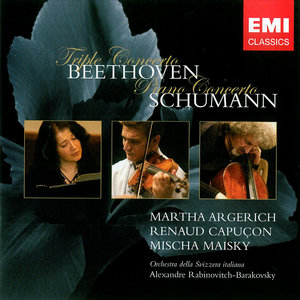 The Beethoven Triple Concerto is a strange work, with the most important–-or at least prominent–-solos given to the cello; it is the instrument which introduces each movement. The remarkable Martha Argerich wisely allows Mischa Maisky to shine in his solos and leading position, but her contribution is anything but back seat. Her customary virtuosity is everywhere in evidence, and, in a way, she turns the piano into the spinal column of the work, with the violin and cello playing around her. Every time Maisky is about to lapse into a mannerism which might detract–-too much sliding, a dynamic slightly exaggerated–-Argerich brings him back, and both of them play with handsome tone. Capucon's violin is recorded a bit stridently (this was taped live in Lugano), but his playing is equally stunning. Alexandre Rabinovitch-Barakovsky leads the orchestra matter-of-factly until the final movement, when he catches the proper fire. In the Schumann A minor concerto Argerich is wonderful the solo passages and a fine partner in orchestrated ones and she really makes much of both the lyrical runs and the dance-like passages in the last movement. Recommended.