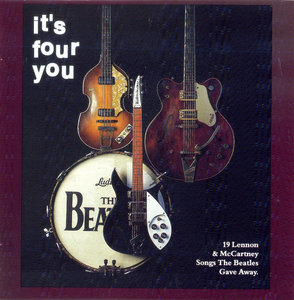 IT'S FOUR YOU was a CD recorded & released in 1994 by the Australian Beatles tribute group The Beatnix. It featured the performances of Steven Shipley, Bruce Coble, David Wood & John Taylor, the four musicians who would go on to become the founding members of THE BEATELS shortly after this album was recorded. The idea for the album came from Australian music writer Glenn A Baker, and the album was originally released on Glenn's record label, Raven Records, in 1994. Glenn had seen the band perform, & knew what they were capable of, & so he approached them & asked if they would be interested in spending a few weeks in the studio recording and mixing 19 songs that Lennon & McCartney had written, but never released by The Beatles. Some tracks had never been recorded by The Beatles - they had been given to other NEMS artists such as PJ Proby, Cilla Black, & Peter & Gordon. Many tracks had gone to number one on the charts.