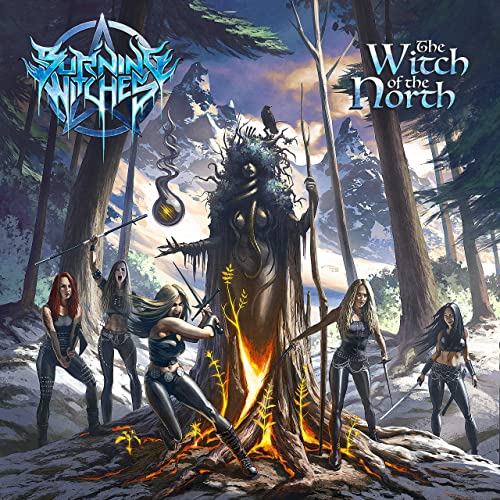 One could view the past year as lost time, as a bleak era where live music was few and very far between. But the flipside of that perspective is a time of opportunity, specifically for a band to hone their craft in a songwriting and studio capacity, and that was precisely the road taken by one of Switzerland’s hottest new metal acts Burning Witches. Already three albums deep into a career that has only spanned about 6 years and riding high off the strong success of their 2020 LP “Dance With The Devil,” in spite of the pandemic curtailing the possibility of promotion via touring, this order of dark conjurers have taken the occasion to continuing channeling the spirit of heavy metal’s classic elite with their own unique twist. Thus the fourth chapter of this ongoing tale of black magic dubbed “The Witch Of The North” has come in just over a year, bringing some new twists to go with the familiar territory of crushing riffs and banshee wails.
Right out of the gate, this album strikes the snow covered landscape with a decidedly more lofty and epic tone, not to mention a more technically charged one. While the aforementioned honing of the fold’s sound during the additional downtime created by the worldwide lockdowns likely plays the most pivotal role in this, one would be remiss not to mention the newly acquired guitar shredder Larissa Ernst, replacing the outgoing Sonia Nusselder. Per the testimony of other guitarist and co-founder Romana Kulkuhl, Ernst had been a longtime friend and provided the needed chemistry to keep the cauldron boiling and the rest of the coven were highly impressed by her chops on the instrument. Combined with a tight rhythm section to help channel the flash of classic Judas Priest and the flair of USPM stalwarts Jag Panzer and German powerhouse outfit Running Wild, and the Doro-like grit and fury of front woman Laura Guldemond, a formidable storm of sound is the result.

In contrast to the previous studio installment, this opus sets the stage with something akin to a 80s B-cinema fantasy romp. Set to a series of mighty wind gusts, “Winter’s Wrath” contrasts with the almost creepy horror vibes of the last album’s opener with more of a folksy, tales told by campfire type vibe that might almost be mistaken for Ensiferum save for Laura’s airy crooning presentation. What follows is a surprisingly mid-paced and thudding stomp of heavy riffing in title song “The Witch Of The North” that has a bit more of a Viking-like feel to it, with Guldemond’s voice shifting between a gritty 80s wail and a more harsh and garbled shout that, along with the darker character of the music, gives things a slight melodeath vibe. This venture into dragon boat territory is by no means alone either, as the bottom-heavy mid-paced bluster of “We Stand As One” and folksy balladry of “Lady Of The Woods” also blur the lines between vintage 80s leather and early 2000s tributes to Norse exploits.
Then again, while this album makes some very intricate shifts in stylistic flavor, this is still largely the same brand of speed-infused classic metal thunder. The driving speed metal ferocity of “The Circle Of Five” definitely crosses into familiar territory for those who love the vintage velocity that Accept would occasionally dish out, and Guldemond even channels Udo’s signature snarl at a few key points, while the modern punch of the drums and guitars definitely reminds of Primal Fear. The more noodling riff work and harmonically rich “Thrall” showcases an exaggerated channeling of Iron Maiden with a speedier gloss, while the blistering pace and shred happy exploits of “Dragon’s Dream” split the difference between the classic quasi-thrash feel of “Painkiller” and the modern interpretation of the concept occasionally exhibited by Battle Beast. Things are ultimately polished off with a raucous and modernized interpretation of Savatage’s “Hall Of The Mountain King”, once again showcasing this band’s uncanny ability to make a specific metal classic their own in the same way that they have the corresponding style.
Though this order of five have been on a consistent winning streak since they first burst out of the confluence of western, central and southern Europe, this is the best showing of their four full length entries. The merger of Norse mythology in the lyrical content and their usual brand of olden witchcraft imagery provides a very fresh take on things, as does the corresponding musical influences that occasionally sees featured riffs that could almost be mistaken for something Arch Enemy or Amon Amarth might bring forth at a lower tuning. This is the complete package, and with newcomer Larissa Ernst turning in an exemplary performance that would make Tipton and Downing proud, it’s an improved on at that. Fans of vintage Judas Priest, Warlock and Manowar who don’t mind their metal with a modern and occasionally more extreme edge comparable to Unleash The Archers and Huntress will not want to miss this.