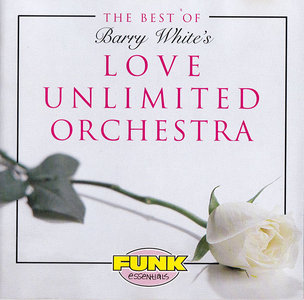 The Best of the Love Unlimited Orchestra collects 15 tracks by Barry White's groundbreaking instrumental support outfit. Their sound as assembled by White – thick layers of sweet strings, pulsing beats, chunky wah-wah guitars, plus tinkling piano and gently swelling horns – played a huge role in creating the blueprint for disco, not to mention countless porn soundtracks. In addition to backing White and his female protégées Love Unlimited, the Love Unlimited Orchestra also made their own recordings, naturally with White at the helm. Although they recorded up to 1983, their commercial heyday lasted from 1974-1977, when they charted regularly on the pop, R&B, and disco/club listings. They even scored a number one pop hit right out of the box with 1974's "Love's Theme," a watershed record in the history of disco. That's here, of course, plus the Orchestra's other chart hits: "Satin Soul," "Rhapsody in White," "Forever in Love," "My Sweet Summer Suite," "Bring It on Up," and their theme from the 1977 remake of King Kong.