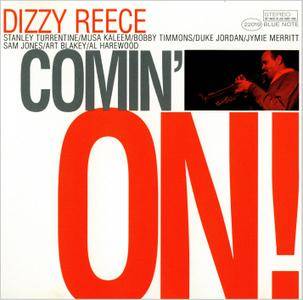 For a short time in the late '50s trumpeter Dizzy Reece was an up-and-coming jazz artist. However, success eluded him and he quietly faded into obscurity, only occasionally releasing material after the early '60s. As a matter of fact, the sessions that became Comin' On! languished in the Blue Note vaults for almost four decades. Rediscovered in 1999, these dates feature six well-rounded hard bop compositions by Reece along with three standards. The tracks from April 3, 1960, not only document the Blue Note debut of tenor saxophonist Stanley Turrentine but also employ the talents of the Jazz Messengers' rhythm section of the time, pianist Bobby Timmons, bassist Jymie Merritt, and drummer Art Blakey. By July 17, 1960, the only musician remaining from the previous date was Turrentine, sharing tenor duties with Musa Kaleem, who is also heard on flute. (The later session's rhythm section had changed to pianist Duke Jordan, bassist Sam Jones, and drummer Al Harewood.) Neglected, although spirited, sessions from an underrated trumpeter and composer.