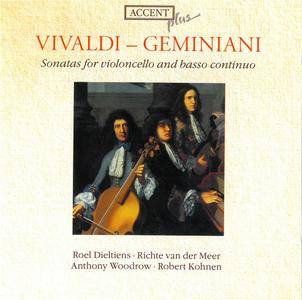 It is now generally accepted that Vivaldi wrote ten cello sonatas – one of them now lost. Six (RV 47, 41, 43, 45, 40 and 46) of the surviving nine were published posthumously as a set, in Paris, by Charles-Nicolas Le Clerc around 1740. The other three survive in manuscript collections: RV 42 (along with RV 46) is preserved in the library at Wiesentheid Castle at Unterfranken in Germany; RV 39 and 44 (along with RV 47) are to be found in a manuscript in the Naples Conservatoire.
Geminiani’s opus 5 consists of six cello sonatas, and was first published in Paris in 1746. The twenty years either side of 1740 saw the cello rise to a very fashionable position in French musical society, largely at the expense of the bass-viol – a change of fashion which stirred such strong emotions that in 1740 Hubert Le Blanc published his fierce Defense de la basse de viole contre les entreprises du violon et les pretensions du violencel. Music such as that by Vivaldi and Geminiani which is played here by Roel Dieltiens and his colleagues must have made a powerful counter-case for the cello.