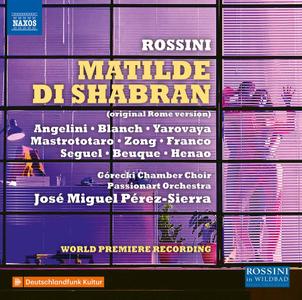 The comic-heroic romp Matilde di Shabran was Rossini’s last commission for the theatres of Rome, the city where he’d had great successes such as Il barbiere di Siviglia. Rossini took advantage of the agile, sparkling style of librettist Jacopo Ferretti to create a narrative in which the ferocious Corradino, a declared misogynist, is introduced to the resourceful Matilde, who succeeds in melting his iron heart and winning his love. This premiere recording revives the original 1821 Rome version, which was conducted at the last minute by Paganini, and caused brawling in the streets between Rossini’s admirers and detractors.