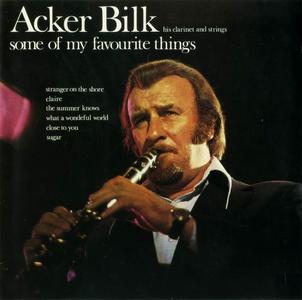 Acker Bilk has won immortality on rock oldies radio for his surprise 1962 hit "Stranger on the Shore," an evocative ballad featuring his heavily quavering low-register clarinet over a bank of strings. To the jazz world, though, he has a longer-running track record as one of the biggest stars of Britain's trad jazz boom, playing in a distinctive early New Orleans manner.
The title of this compact disc tells it all - the tracks featured here are just some of Acker’s all time favourites and the loving care he puts into his performances show just that.
‘Stranger On The Shore’ must be one of Acker’s biggest favourites as he wrote it and had a world-wide hit with it, so it just had to be the opening title on this disc… 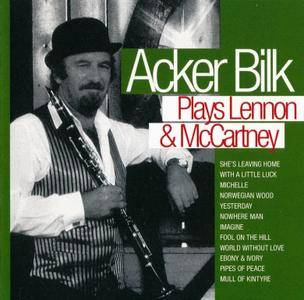 Acker Bilk was a solid English Dixieland jazz clarinetist who also crossed over into easy listening albums. Acker Bilk Plays Lennon & McCartney probably won't be enjoyed by most rock or jazz fans but it is an entertaining listening experience. One of the interesting things about it is that it includes as many solo cuts from the careers of Lennon & McCartney as it does tracks that the two wrote for The Beatles. The album's sweeping string arrangements and insipid keyboard lines sometimes get in the way of Bilk's concise clarinet playing but his musical personality still manages to shine through. Bilk mostly sticks firmly to the melodies of the songs but often starts improvising at the fade out. Ultimately, the album may contain kitschy elevator music but it's of the sort that's played in the better elevators and the tunes do show how melodically gifted both John Lennon and Paul McCartney were.