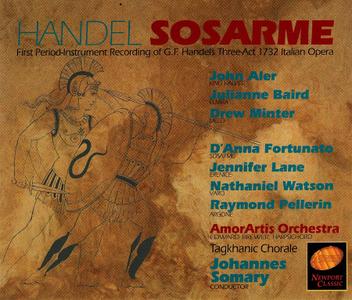 Muzio Scevola ("Mucius Scaevola", HWV 13) is an opera seria in three acts about Gaius Mucius Scaevola. The Italian-language libretto was by Paolo Antonio Rolli, adapted from a text by Silvio Stampiglia. The music for the first act was composed by Filippo Amadei, the second act by Giovanni Bononcini, and the third by George Frideric Handel. Collaborations of groups of composers were common in the 18th century, though this is the only one done in London. Bononcini had written the music for two earlier treatments of this story on his own, works dating from 1695 and 1710. The opera's initial run of performances began at the King's Theatre in London on 15 April 1721. A part of the second act and the third part composed by Händel is documented on the production of new port Classic being here. ‘Faramondo’ was produced in 1738 at the King’s Theatre in the Haymarket after the collapse of the rival Opera of the Nobility. This means that, unlike some of his Covent Garden operas which were produced whilst his rivals performed at the King’s Theatre, ‘Faramondo’ was written for a superb cast which included the bass Antonio Montagnana sang the role of King Gustavo and the castrato Carestini (making his London debut) in the title role. Writing for such fine singers means that Handel takes for granted the ability to sing virtuoso passages. In fact, singers would have expected to be able to display their talents in the requisite number of arias. These arias were crafted (or fine tuned) once the cast was known, so that they take advantage of the best points of a singer’s voice. King Gustavo’s arias takes good advantage of Montagnana’s amazing range and all the singers would have expected the divisions to lie in the best part of their voices.