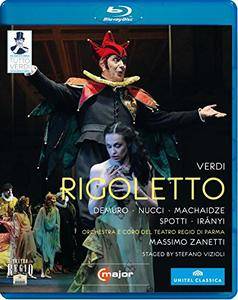 The opera was based on the play Le roi s'amuse by Victor Hugo and is perceived to be the first of Verdi’s great masterpieces of his mid-to-late career. This performance features a top-class cast, led by Nino Machaidze and Leo Nucci.
Nucci simply owns the role of Rigoletto…a master-class in vocal acting…Machaidze is the very embodiment of Gilda. Her characterization is simply marvellous…[she] has a lovely full tone - this is no canary Gilda - with 'Caro nome' poised and emotional…The supporting cast is excellent…I was highly impressed by Massino Zanetti's conducting. (International Record Review)