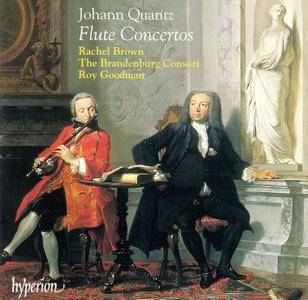 Flautists tend to know that Quantz gave flute lessons to Frederick the Great and that he wrote about 300 concertos for the instrument. Only a few of these concertos have been easily accessible in print or on disc. However, in this welcome recording of five Quantz concertos, flautist Rachel Brown seems the perfect ambassador to bring a few of these unfamiliar but intriguing works back into the repertoire. Whether playing a Baroque-inspired fugue, a more ‘classically styled’ Allegro or languid slow movement, Brown’s daring expression and technical brilliance – together with the Brandenburg Consort’s focused sound and racy pace – seem intuitive. Quantz and Brown appear together again, briefly, in Concert in Sanssouci. ‘Sans souci’ means ‘without worry’, and was the name of Frederick the Great’s country house near Potsdam. A certain joie de vivre is in the air in this recreation of a typical evening’s concert chez Frederick. The Hanover Band, under Roy Goodman, plays with real spirit, although Nathalie Stutzmann’s rich contralto lends a more melancholic feel in arias by CH Graun. Although Frank de Bruine is a rather understated soloist in the CPE Bach oboe concerto, the band’s dynamic interpretations and composer’s inventiveness win through.