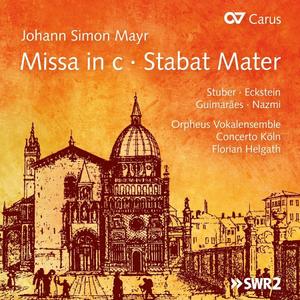 Simon Mayr is mostly remembered as Donizetti’s teacher, but as recent recordings of his sacred music reveal, there is more to him than that; more, even, than the 70 operas he produced over his long career in his adopted Italy. According to expert Franz Hauk’s liner notes, Mayr produced in all some 600 sacred compositions; many of these are individual mass movements but they also included 18 complete masses. 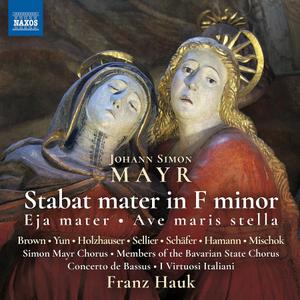 Restored by Mayr expert Frans Hauk from two extant manuscript versions and heard here in its world première recording, Simon Mayr’s Stabat mater in F minor was singled out by a contemporary biographer “for its marvellous effect” and “heavenly beauty”. Mayr himself frequently returned to this work, recycling one of its movements in his great Requiem. The song-like Ave maris stella builds on a hymn that dates back to the 8th century. 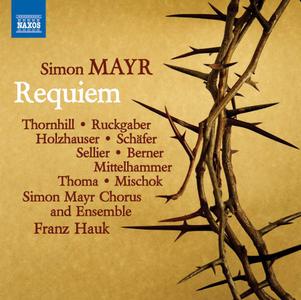 Admired for his fusion of German and Italianate musical elements, Johann Simon Mayr is increasingly recognised as one of the most intriguing and influential composers of his time. His Requiem in G minor is shrouded in compositional obscurity but it is clear that the published version is surpassed both in scale and instrumentation by the elaborate edition performed here, which has been assembled from the autograph manuscripts. Small sections were composed by Donizetti and then corrected by his teacher, Mayr. Church style and more Romanticised elements are finely balanced in this important example of Mayr’s compositional language. 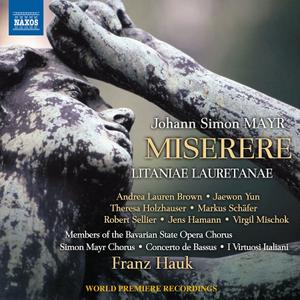 Mayr had already earned esteem in Venice for his church music when, in 1802, he assumed the post of maestro di cappella at the basilica of Santa Maria Maggiore in Bergamo. With a modest orchestra at his disposal he soon composed a Miserere in G minor, in which solo orchestral instruments often carry on a dialogue with the vocal soloists in a succession of powerful, descriptive and beautiful arias and choruses. The Litaniae Lauretanae, cast in three parts, features wide leaping figures and sighing melodies. 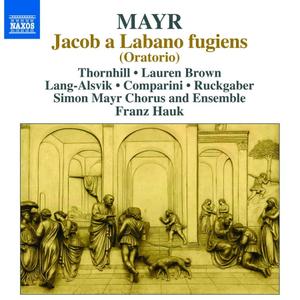 Bavarian-born Simon Mayr spent much of his life in Italy where he promoted Viennese classical composition but also absorbed much from his studies in Bergamo and Venice. Though he was one of the most admired operatic composers of his day—he taught Donizetti, who revered him—he was particularly noted for his sacred oratorios. Jacob’s Flight from Laban is marked by his characteristically vibrant musical palette, with important writing for wind instruments, operatically-based arias and confidently-handled ensembles and choruses. Franz Hauk is Mayr’s leading interpreter and acclaimed for his many recordings. 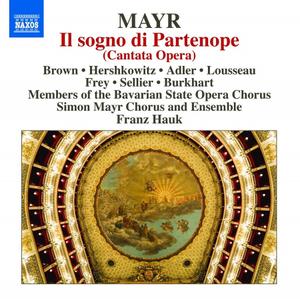 Franz Hauk and the Simon Mayr Chorus and Ensemble have spearheaded the revival of the music of Johann Simon Mayr who was born in Bavaria but lived in Italy. In the latest instalment of their critically acclaimed recordings they turn to Il sogno di Partenope, an allegorical staged cantata composed to mark the rebuilding of the Teatro San Carlo in Naples following a fire in February 1816. Mayr’s significance as an intermediary between the opera seria of the late eighteenth-century and the melodrama of the early-nineteenth is reflected in this important work, a unique kind of ‘cantata opera’ of which only the second act survives. 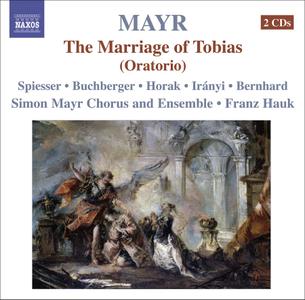 One of the most important composers of opera and sacred music between Mozart and Rossini, and Donizetti’s teacher, Johann Simon Mayr also composed several major oratorios, including David and The Marriage of Tobias. Like Haydn’s more famous Il Ritorno di Tobia, Mayr’s work recounts how the archangel Raphael miraculously helps the boy Tobias to cure his aged father’s blindness. Conductor Franz Hauk prepared the performing edition for this exciting new recording. 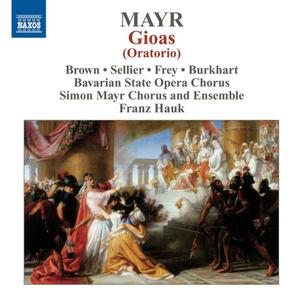 Bavarian-born Johann Simon Mayr achieved renown as an Italianate opera composer, his earlier work taking the form of sacred oratorios. Gioas is a combination of both forms, being a parody-oratorio closely following Mayr’s opera I misteri eleusini, which was considered by Stendhal to be “among [the] most powerful musical works of the age”. This mythical drama of kings, priests and goddesses was ideally suited for its intended devotional use, and it joins other pioneering recordings from Franz Hauk which include David and Samuele. 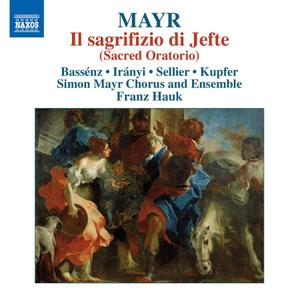 It is only in the last few years, largely as a result of the pioneering performances of the Simon Mayr Chorus and Ensemble conducted by Franz Hauk, that Mayr has come to be valued as one of the most significant composers of operatic and sacred music of his time. Il sagrifizio di Jefte (The Sacrifice of Jephtha), first performed in 1795, is a dramatic oratorio with a wealth of variety in both the vocal and instrumental writing, which foreshadows the operas to come. 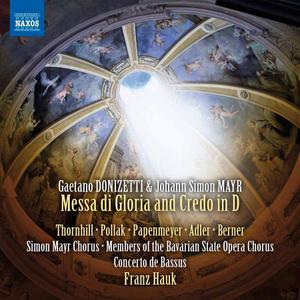 While the German tradition observes a strict distinction between sacred and secular styles, the 19th-century Italian Mass can feel more akin to attending an operatic performance. Donizetti’s church music, consisting of at least a hundred items, has hardly been explored. Individual movements were often later recycled by the composer, in cantata-like fashion, to form a complete Mass, and it is this ad hoc technique that Franz Hauk has used to create a new work, the Messa di Gloria and Credo in D. This includes an expansive Qui sedes with its violin solo written for the famous violinist-composer Pietro Rovelli, and is completed with movements by Johann Simon Mayr from whom Donizetti learned his compositional craft in settings of sacred texts. 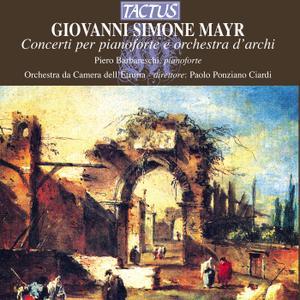 One might have a little trouble locating composer "Giovanni Simone Mayr" in a music dictionary, where his name is most likely listed as Johannes Simon Mayr. Mayr was German, but practically worked the whole of his long career in Italy, and his music conforms strongly to early nineteenth century Italian tastes. Although born roughly halfway between Mozart and Beethoven and outliving the latter by nearly two decades, Mayr apparently never felt the compunction to wield the cudgel of Romanticism, preferring to stick to the tried and true Classical tradition known best to him. This would have served him well in Italy, where the Romantic revolution was slow to take hold and did not find acceptance until Giuseppe Verdi dragged Italian music kicking and screaming into the nineteenth century. 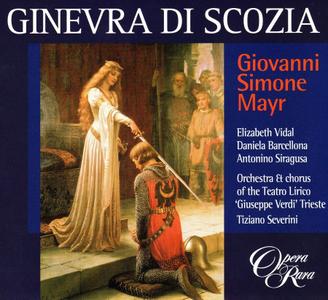 The bicentenary of this occasion was celebrated with a new production of the same work and Opera Rara went to Trieste to record the initial performances of this important revival. The cast is led by French soprano Elizabeth Vidal who tackles the stratospheric role of Ginevra with ease (and Es – a bushel of them!!). As the hero Ariodante, Daniela Barcellona confirms her place on the roster of talented, young artists emerging from Italy. Antonino Siragusa, likewise, is representative of the new generation of bel canto tenors. 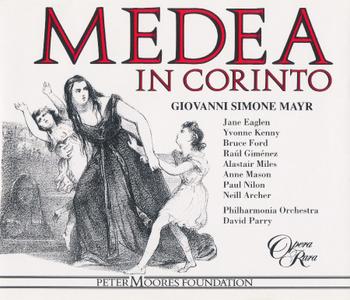 Giovanni Mayr is known today primarily as the teacher of Donizetti, but in the very late 1700s and first two decades of the 1800s, this German-born, Italian-by-adoption composer was all the operatic rage, combining the fiorature and niceties of Italian vocal writing with a German penchant for orchestration (Medea’s opening aria has a violin obbligato of the type that you simply do not find with the Italians, for instance). Medea in Corinto is considered Mayr’s masterpiece; in fact, it’s a long score, not quite as poweful as Cherubini’s, but with plenty of flavor of its own. 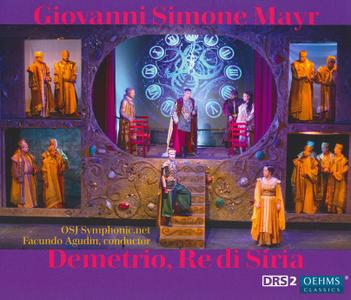 The current renaissance in conjunction with the works of Giovanni Simone Mayr is not surprising, but is certainly necessary. With Demetrio, he left to posterity a masterpiece that belongs on the great stages of the world. Mayr’s late work is a mixture of romantic anticipation, stylistic reminiscences of Mozart and Haydn, bel canto elements and a touch of Rossini, all worked into a unique form. Of particular note is Mayr’s melodic inventiveness. Here OehmsClassics presents a live performace of Demetrio recorded at the Moutier Festival (Switzerland) in June 2011. 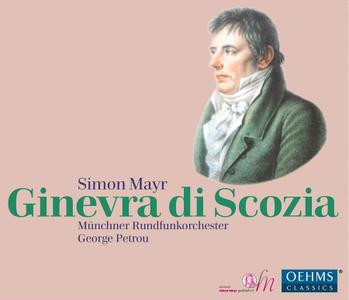 OehmsClassics proudly presents this recording of the Jubilee Concert „250th Anniversary of the Birth of Simon Mayr“ made in June 2013 in Ingolstadt. The performance was of Mayr’s opera Ginevra di Scozia, a saga from Scotland that is an important step in the transition to romantic Italian opera.