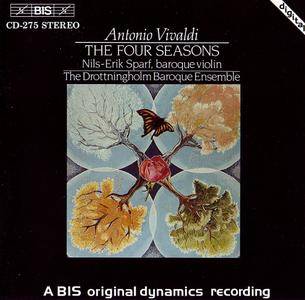 If listeners had to commit to a single version of Vivaldi's Four Seasons for the rest of their lives, this 1984 BIS recording would be thoroughly satisfying choice. Superbly played, brilliantly recorded period instrument performances of this perennial masterpiece are all but a dime a dozen, and the differences between Hogwood's and Pinnock's and Harnoncourt's readings don't begin to make up for the fatal boredom of their performances. This version with Nils-Erik Sparf and the Drottningholm Court Baroque Ensemble would be an ideal choice because theirs is the freshest performance of the piece. Beyond their excellent technique and impeccable sense of style, Sparf and the Swedish musicians bring joy and enthusiasm to the music, and sound like they are in turn receiving happiness and energy from the music. There's real pleasure here, and real affection, as if the concertos were newly composed and these were their world premieres. Filled out with witty accounts of Vivaldi's F major Concerto for Bassoon and his G minor Concerto for Flute and Bassoon, this disc is a delight. 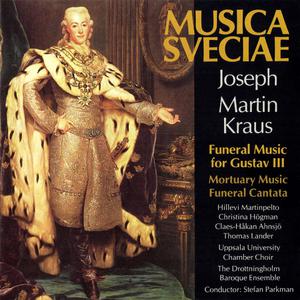 Kraus' last and greatest works, the Symphonie funebre and Funeral Cantata for Gustav III, are fully able to stand with the best works in the forms of the period, as great as the late symphonies of Haydn and Mozart and, yes, even as great as the Requiem of Mozart. Written under the overwhelming personal and national tragedy of the assassination of the King of Sweden then at the peak of its cultural and national greatness, Kraus' funeral music is numb with shock and wild with grief, but always completely controlled, masterfully balanced, and profoundly moving. If there are only two works you ever listen to by Kraus, let them be these two works.