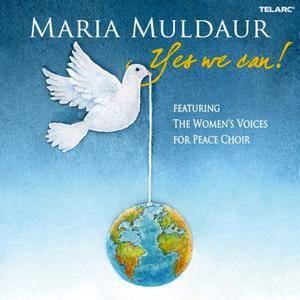 There are a number of arguments to be made for and against Maria Muldaur's 2008 antiwar statement Yes We Can! on Telarc (before actually listening to it; remember, we live in a cynical culture). The "perceived" negatives all relate to the intent of the recording and who it's supposed to reach (no doubt an expression of the same set of beliefs rooted in Muldaur's 1960s music), and the fact that it's loaded with guests (in all fairness, these star-studded affairs seldom work). On Yes We Can!, her guests include Muldaur's old friends (Joan Baez, Bonnie Raitt, Phoebe Snow, Jane Fonda, and Holly Near) and influences (Odetta) and new pals (writers/spiritual gurus Anne Lamott and Marianne Williamson, and Indian spiritual teacher Amma). Does it read as if it is yet another exercise in self-referential backslapping? Yep. But don't believe everything you read on the back of a CD jacket. The positives are all musical.