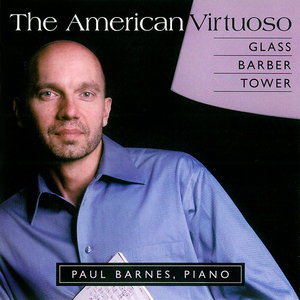 The American Virtuoso presents a recital by American pianist Paul Barnes. His third release for Orange Mountain Music, it features piano music by American composers including the world premiere recording of Barnes' transcription of Philip Glass's Piano Concerto No 2 'After Lewis and Clark' - the full version of which he also premiered on OMM in 2006 with the Northwest Chamber Orchestra under Ralf Gothóni. The focus of this first-rate solo recording are Samuel Barber's landmark "Sonata for piano" of 1950, described by Vladimir Horowitz as "the first truly great native work in the form", and his haunting "Ballade" and "Nocturne". And it ends with two colourful contrasting pieces from the mid-1990s by Joan Tower from "No Longer Very Clear", inspired by John Ashberry's eponymous poem.