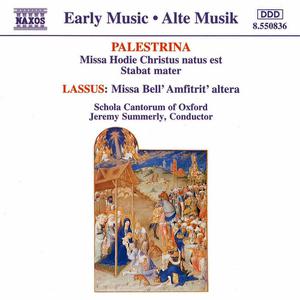 Where in their account of Palestrina’s Missa Aeterna Christi munera Summerly’s group are restrained in their devotional manner, this celebrated Mass for Christmas has them joyful and exuberant. The choir, over 30 strong, brings out both the beauty and the drama of the writing, and equally so in the brief motet setting the Christmas works. The magnificent Stabat Mater is wisely given to a smaller group of 16 singers, two to a part, with added clarity in the complex polyphony. Well coupled with one of Lassus’s best-loved Masses, Palestrina’s close contemporary from Flanders, this CD represents the work of two supreme polyphonic masters who died in the same year. 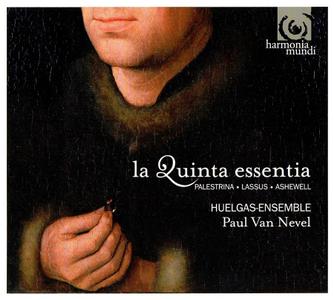 The Huelgas-Ensemble presents another superbly sung, thoughtfully programmed recording that offers for our consideration what conductor Paul Van Nevel describes as “the three major styles of the Renaissance”, represented by Roman, Franco-Flemish, and English Late Gothic masses. It’s easy to understand the choice of Palestrina (Roman) and Lassus (Franco-Flemish)–but with Thomas Ashewell we truly have a horse of a different color, stylistically for sure, but also one with the most meager catalog (only two extant complete works, according to Van Nevel). The term “late Gothic” as applied to musical style also is not a common one, but Van Nevel obviously has carefully–and probably cleverly–chosen to demonstrate its aspects with Ashewell rather than with a more familiar yet more commonly heard contemporary composer such as Cornysh, Fayrfax, or Carver. 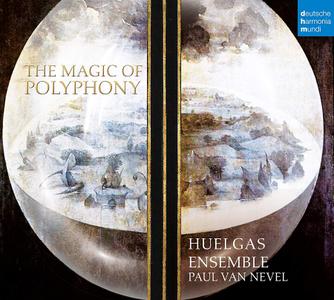 The general trend in recordings of Renaissance polyphony has been toward typing music to specific surroundings: royal festivities, religious feast days, and the like. This collection by the Huelgas Ensemble goes in the other direction, providing three CDs' worth of music ranging from the medieval era to Anton Bruckner, with most of the pieces falling into some stretch of the High Renaissance. The music was recorded, beautifully, in a Romanesque church near Dijon in 2018, and the program is unified loosely by a set of general guidelines for the selections at that event: the music emphasized "unknown repertoire, undeservedly obscure composers, and experiments that fall outside the scope of the normal concert season." 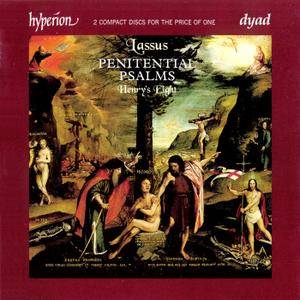 For those who believe in Original Sin, Predestination or, for that matter, Karma, here's a two disc set of the complete "Penitential Psalms" of Orlandus Lassus fabulously performed by Henry's Eight and marvelously recorded by Hyperion. Gloomy but glorious works that hope for the best while assuming for the worst, Lassus' setting of seven fuliginously serious but spiritually salubrious Psalms of David are sure to send shivers down the spine of anyone with a pessimistic cast of mind. The acapella performances of the all-male – two countertenors, three tenors and three basses – Henry's Eight is darkly hued, strongly rhythmic, deeply soulful, very expressive and absolutely true to the late Renaissance agony of Lassus's music. While not perhaps the first place to start with for Lassus in a melancholy mood – try "The Tears of Peter" for the peak of harmonic anguish – Henry's Eight's recording Penitential Psalms belongs in every Lassus collection, especially as preserved in Hyperion's intimate and evocative sound. 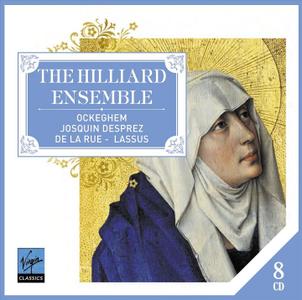 From Ockeghem born around 1420 to Lassus dead in 1594 via Josquin des Prés, this 8-CD collection presents almost two centuries of masterworks from one of the most extraordinary musical school, that could be compared to the Italian Renaissance in architecture or painting. The Hilliard Ensemble, founded by Paul Hillier in 1974 has championed this music with all the virtues of their instantly recognizable style and with a clarity and cleanness of timbre that are matchless.